There were a number of good papers presented during the Philippine Economic Society (PES) Conference last week, see my previous post here, 11-11-11. Among such papers was the closing presentation by Dr. Josef "Jop" Yap, President of the Philippine Institute for Development Studies. Jop is also a friend from the UP School of Economics. He quickly sent me his powerpoint presentation when I requested for it -- thanks a lot, Jop. 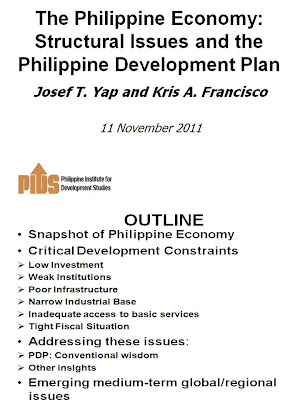 Jop's presentation was rather comprehensive, from correcting certain misconceptions about the Philippine economy, to institutional issues that keep it from really developing.

Here, Jop said (1) is not true. In the 50s, Thailand and/or Malaysia were more developed or have higher per capita income than the Philippines. 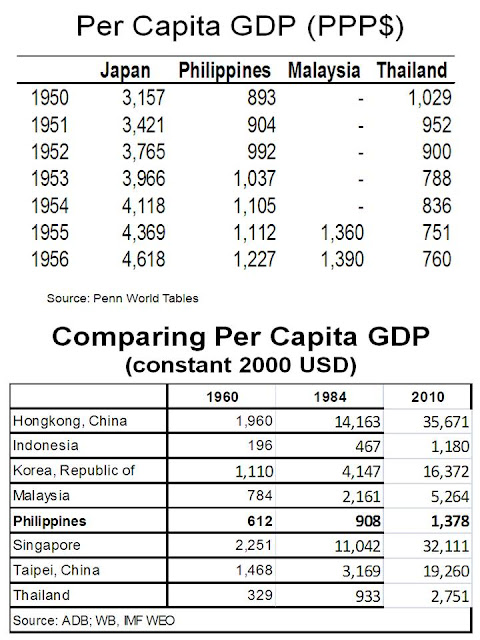 By 1960, the "tiger economies" of Hong Kong, Singapore, Korea and Taiwan, plus Malaysia were already much ahead of the Philippines. We were only richer than Thailand and Indonesia then.

The second myth that Jop debunked was that we "lost" two decades, not just one, from the early 80s to early 2000s. "Lost decades" here mean the absence of growth -- either a decline or a flat -- in per capita income.

There was one slide that Jop showed which for me, would constitute as 3rd myth that needs to be corrected. Conventional belief is that the Philippines' power and electricity rate is "2nd most expensive in Asia, next to Japan." Well, the chart below shows that we already have the most expensive power rate in Asia, at least for industrial users. 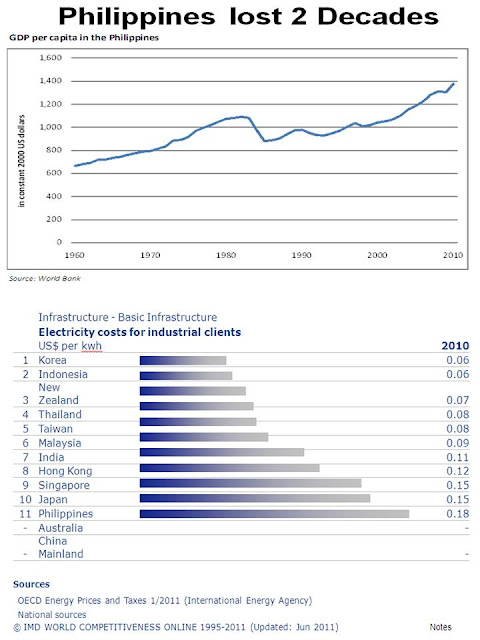 He gave two factors why this is so: (1) Universal charge for stranded contract costs and stranded debts, and (2) Losses from transmission and distribution (Philippines – 12.6%; Thailand – 6.1%; Indonesia – 10.1%; Malaysia – 2.3%). He said he is also looking at the angle of whether other Asian countries are subsidizing their power rates or not.

I think that even if other countries are not subsidizing their power rates (ie, not using taxpayers' money to pay power producers so the power rate they give is lower), those countries are not taxing their power rate. Here, the Bureau of Internal Revenue (BIR) and the Department of Finance (DOF), courtesy of the country's tax code, is slapping a value added tax (VAT) on already expensive power rates. Heck, they even slap a VAT on "system losses" and pilfered power. 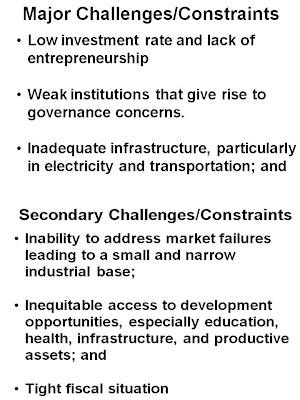 On the structural and institutional defects of the economy, he gave these explanations for the major and secondary constraints.

He mentioned though the term "property rights" and he correctly referred to the existing endless agrarian reform (ie, zero timetable) program. He wrote,

Investment in agriculture hampered by delay in agrarian reform—6 decades by 2014. Conclusion of agrarian reform program will reduce uncertainty with regard to property rights.

Here is the Investment/GDP ratio for selected East Asian economies. The Philippines indeed has a low ratio compared to its neighbors. 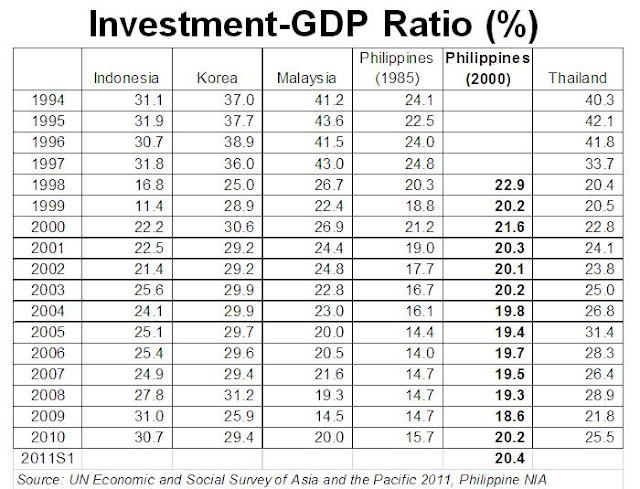 On social and institutional issues, Jop discussed the need for "social cohesion". 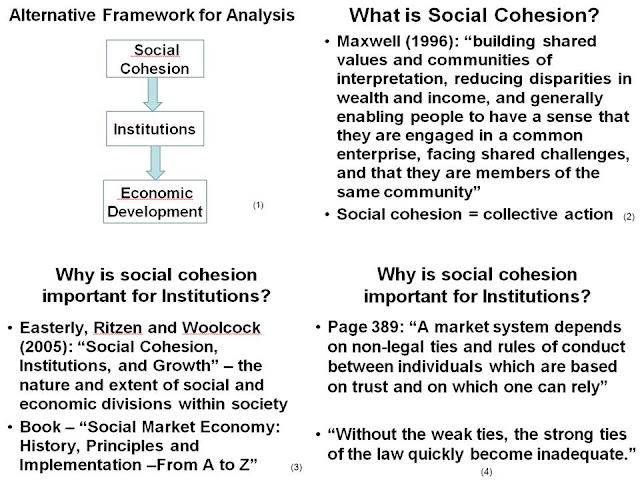 I also believe in the value of social cohesion or related terminologies. But I believe that it can be achieved via voluntary means, not via more coercion by the government. When government forces or coerces social equality for instance, or simply to "reduce inequity", government takes in plenty of taxes supposedly from the rich, expands the bureaucracy (elected and appointed) in all levels from multilateral and foreign aid to national down to local government levels, and such bureaucracies will act as middlemen "poverty warriors".

Social cohesion can be achieved through inequality and market segmentation. People watch a Sharon Cuneta or Black Eyed Peas concert in a big stadium or coliseum here. There are different layers of seat with their corresponding ticket prices. The most expensive can be P7-10,000, the mid-levels can be P1,000 to P6,000 while the cheapest can be P500. Yet those who bought the P500 do not demand or call for social revolution or forced equality in access to the concert, they do not rally in front of the DTI or City Hall to demand that government should subsidize ticket prices so that the poor can also be seated in the front seats. None of it. People understand their place under the Sun and social envy is kept to the minimum.

This practice is observable in many or all sectors when voluntary exchange is allowed. The really lazy and irresponsible people have voluntarily chosen the poverty route, government should not disturb their wish. The same way, some people are just too efficient and hard-working that they become very rich, government should also step back and avoid confiscating as much money as possible from those people, their savings and investments. Getting rich via hard work and efficiency is not a crime that should be penalized by multiple taxation and coercion by the government.

Finally, Jop also showed several tables about population. I won't include those tables here yet because I plan to write another article under the "Population Control" series in this blog, I will use those tables there.
Posted by Bienvenido Oplas Jr at 11:29 AM