Drug Price Control 21: Illegalities in the Implementation of the Policy

A fellow NGO leader in our health NGO federation, the Coalition for Health Advocacy and Transparency (CHAT0, suggested that CHAT and perhaps MeTA Philippines should conduct a seminar or forum assessing the drug price control policy of July 2009, implemented in mid-August 2009. I suggested that there may be no need for it, for the following reasons.

1. The DOH Advisory Council on Price Regulation has been transformed already to Advisory Council on Healthcare. The DOH itself through the NCPAM, has implicitly recognized that price control did not achieve its goal, but there is no explicit and official assessment yet, none that is available publicly and online at least,

2. The two pharma associations, PHAP for the innovator companies and PCPI for the generic companies, have spoken repeatedly, that the policy is wrong. Their latest position papers were presented in a big forum during the 2nd Generics Summit last September 7-8, 2011, organized by the DOH itself.

See my discussions of the PCPI data here, Drug Price Control 19: Why is the Policy not Withrawn Yet, and PHAP presentation here,  IPR and Medicines 16: Wikileaks and the Cheaper Medicines Law, November 08, 2011.

4. The various drugstore chains (Watsons, Mercury, The Generics) and the Drugstore Association of the Philippines (DSAP) were also very vocal in not supporting the policy.

5. Various data from IMS, the main source of DOH itself in designing the policy, showed that prices of many drugs in various molecules, including those slapped with price control, were falling.

6. Former DOH Secretaries Alran Bengzon and Quasi Romualdez have also spoken against the policy. Alran spoke during one of the Advisory Council meetings, said that they at the Medical City (he's the President of the hospital, I think) are in the business of healthcare, not drug retailing. The policy has affected the pricing of various healthcare services of the hospital.

7. During the various meetings of the Advisory Council on Price Regulation at least since June 2009, none of the members there except representatives from the Cancer Warriors Foundation (CWF) and somehow from the Cut the Cost, Cut the Pain Network (3CPNet), supported the policy.

8. PhilHealth and PITC representatives, being government agencies, have a relatively neutral position on the matter. Their mother agencies are either the DOH or the Office of the President (OP), that's why.

9. The Chairman of MeTA Philippines, former Gov. Obet Pagdanganan himself, has also spoken against the policy even if initially he supported it.

But since it was a government coercion through the Senate (then Sen. Mar Roxas), the DOH (through former Sec. DOH-que), DTI and the OP, all private players have to sheepishly obey. When things were finally settled by late July 2009, the Presidential election was less than 10 months away, and Gloria Arroyo would be giving the last of her 9 State of the Nation Address (SONA) that month. It was hours before or after the last SONA of Gloria Arroyo, July 27, 2009, that EO 821 or the real maximum retail price (MRP) order, was signed. But MRP was politically twisted and officially called as Maximum Drug Retail Price (MDRP).

See this comparison that I made. It shows that the criteria used by the DOH has zero basis in the law or its IRR. 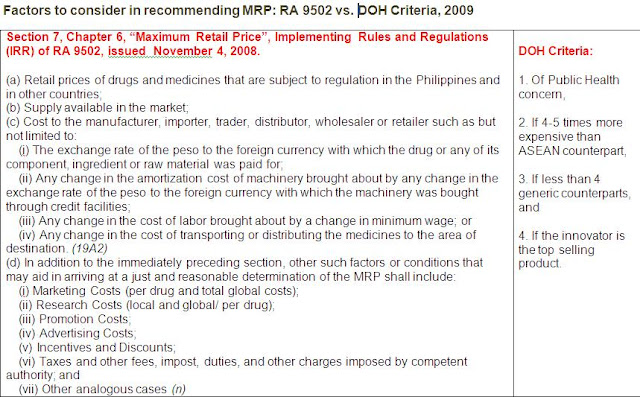 And here are two more illegalities, they may be minor or major items. One is the illegal use of MDRP not MRP (which then was coined to mean "Mar Roxas for President", so OP used MDRP), and the introduction of new term, GMAP.

The third illegality is the absence of reporting by the DOH (twice a year to the President, once a year to Congress) assessing the policy, and such assessments should be made public. 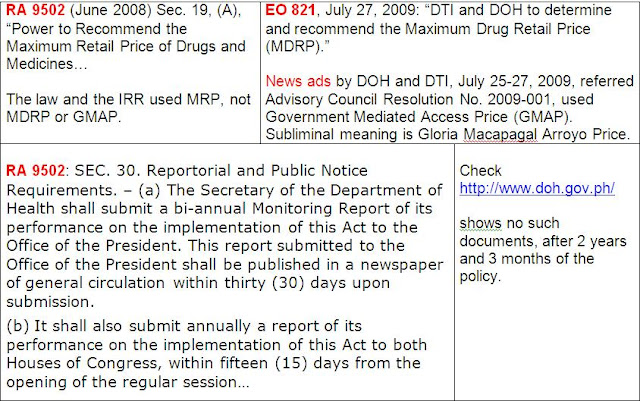 The tongue twisting of MRP into MDRP and GMAP -- both are illegal terms, both are nowhere to be found in RA 9502 or its IRR -- is additional proof that the policy in 2009 was all about politics and politicians, especially the May 2010 elections.

The DOH was lucky that none of the affected players sued it in court. Well, it was difficult to fight government then because the DOH position was heavily supported by then President Arroyo and then Sen. Mar Roxas, a powerful Senator and a Presidential candidate of the Liberal Party at that time.

I have no "axe to grind" against the DOH for re-discussing these issues again. In fact, I am thankful to the DOH because they knew perfectly that I am an advocate of less government, that I never supported drug price control from the start, and yet they kept inviting me to different meetings of the Advisory Council on Price Regulation, now Advisory Council on Healthcare. It's just that the DOH need to recognize once and for all, that the policy is wrong, that the longer that it keep implementing a wrong policy, the more that it allows the damage to the investment environment of the country for multinational investors in general, and the innovator companies in particular, to linger further. Enough of continued illegalities of the policy.

So may I call again on the DOH-NCPAM and DOH Secretary Enrique Ona -- Withraw the drug price control policy, recommend to President Noynoy Aquino to throw away EO 821 issued by former President Arroyo.
Posted by Bienvenido Oplas Jr at 5:54 PM

Are you saying that the DOH and Congress were party to the "illegality" of price control policy? That is a serious accusation.

To a certain extent, Yes, because they both violated certain provisions of RA 9502. That is why I keep arguing that the imposition of drug price control was due to politics and politicians' machinations with less than one year to the 2010 Presidential elections.