Rule of Law 12: Gloria Arroyo, Travel Abroad and the SC 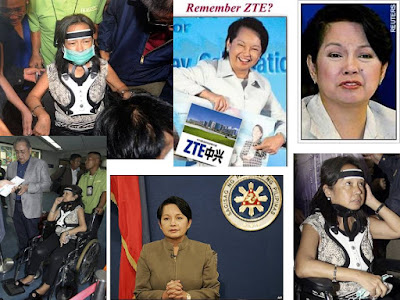 One of the biggest news here yesterday was the Supreme Court (SC) granting of temporary restraining order (TRO) to the earlier ruling by the Department of Justice (DOJ) banning former President and now Congresswoman Gloria Macapagal Arroyo (GMA) from foreign travel, supposedly to seek medical treatment.

Where to get free, reliable and interactive legal opinions? From facebook, where else :-) I went to the fb wall of my lawyer friends, and here's what I got from Atty. Bong Montesa, Atty. Teddy Te, and Atty. Gigo Alampay.

This chart is made by Atty. Bong Montesa

I asked Bong, on the diagram before the shaded portion, if the SC followed all its internal rules in rushing the granting of TRO. When it equated "right to life = right to travel" for GMA, was there clear, irrefutable evidence that she was on a life and death situation yesterday? I read from some lawyers that the SC violated some of its own internal rules.

Bong replied that he doesn't know, that the diagram is about outcomes and possible outcomes, not how the outcomes were reached.

I'm beginning to think that the DOJ should have not blocked Gloria's departure and obeyed the SC. Since it is likely that she and husband Mike Arroyo won't come back as piles of cases will be thrown against them, then the SC will have to explain a lot why it gave the TRO. If the SC cannot defend itself, then it will just be a judiciary crisis, not constitutional or political crisis.

The dissent by J. Carpio--which, under the circumstances, sounds perfectly reasonable except it didn't lend to high drama at the airport--which was probably what the Arroyos and their camp wanted. In the meantime, because of the rush to issue a TRO, the SC majority now needs to situate the right to travel within the right to life.

I vote to defer action on petitioners’ prayer for a temporary restraining order until after the Government files its Comment and after oral arguments are heard on the matter. This should take not more than five working days, which is brief enough so as not to prejudice petitioners in any way. While the right to travel is a constitutional right that may be impaired only “in the
interest of national security, public safety or public health, as may be provided by law,” there are recognized exceptions other than those created by law. Foremost is the restriction on the right to travel of persons charged of crimes before the courts. Another is the restriction on persons subpoenaed or ordered arrested by the Senate or House of Representatives pursuant to their power of legislative inquiry....

I like Justice Carpio's argument, thanks to Ted. Between November 15 to 22, just 7 days, there is no clear "life and death" threat on the condition of Ms. Arroyo as she is being taken cared of in the hospital. They should have waited 7 days. Now the SC is on the defensive for its rush, as Tec pointed out. Let them define and equate "right to life = right to travel" when Gloria's life is obviously not in clear danger of being shut out.

All the justices who voted in favor of the TRO were Gloria appointees. I'm wondering, are there other schemes, say in other countries, where appointment to the SC is done not by the President? Say the board of lawyers, or the board of judges. The Judiciary being "co-equal" to the Executive is immediately contradicted by the fact that all justices of the SC are appointed by the President.

This one is from Atty. Gigo Alampay:

You may think GMA is guilty and about to run, but in the absence of a case being filed against her, you must defend her right to travel. You may even think she's guilty as hell (as I do), but you must accept that she has a right to be presumed innocent. You may not agree with the Supreme Court, but under our Constitution, it is the final arbiter of the law. Those who say this is a political and not a legal matter stand on a slippery slope that I am not inclined to join.

There is no pending case. There is, right now, only the threat of one. Until one is actually filed, she, like all of us, really doesn't have to explain anything to anyone in the exercise of her rights. Not that she deserves it. Pero it is what it is - if you believe in the Bill of Rights.

Good arguments by Gigo there. My question then, if the DOJ did not block Gloria's travel, she went abroad, then she won't come back as there are piles of cases that may be thrown against her, will the SC accept accountability for its wrong decision? If so, what kind of accountability will the SC or its justices, can take?

Gigo replied that "if GMA doesnt return, frankly, it won't be the SC's fault. The decision to uphold her basic right even in the face of possible or likely flight, in my opinion, would still be correct."

From a copy of the SC TRO that I saw, the SC has zero accountability if Gloria and Mike won't come back. They only ordered the couple to report to a Philippine embassy office in whatever country they will stay. If that country has no extradition treaty with the Philippines, then no amount of criminal cases filed against the two can bring them back here. The SC justices who voted the TRO? tatawa-tawa lang siguro.

Justice Carpio's dissenting opinion makes a lot of sense. Sabi nya, oral argument on Nov. 22, then the SC will decide right there and then whether to grant the TRO or not. That way, both sides, Gloria and DOJ camps, can be heard. But the TRO was really rushed, highly suspicious. And this further erodes the integrity of the SC, why it rushed granting the TRO on a case that is highly political and has lots of legal questions and ramifications.

I will say that the SC has entered a moral hazards problem here. The justices who voted for the TRO were probably saying, "Hey, without Gloria, we won't be here in the SC. Now she wants to escape quick, she wants payback for her earlier favor. Since there is no penalty or accountability on our part for her escape, let's give it to her."

But if Gloria will come back quick, then the SC TRO is vindicated. But this scenario seems highly unlikely, judging from the rush to exit of gloria and Mike.
-------

I posted this article in my facebook wall, it attracted comments from some friends. Since I did not get their permission to post this in my blog, I will remove their photos and family name. What is important are the ideas they impact.

Elizabeth: What if GMA foils all those fearful suspicions once again, Nonoy? Remember that they feared that GMA will run again for office or that GMA and her supporters will do everything to cheat the elections and that they will protest if Villar (her supposed successor) loses? And then when Noynoy won, they graciously conceded right away with nary a protest. Remember that propaganda campaign with Noynoy holding a torch to lead a witchhunt? The problem with this current administration was that it was propelled to office out of fear. In the meantime, we are allowing this Executive to attack another bastion of democracy which is the Judiciary which is a separate and co-equal body because of fears that it is a "biased" court. What about his appointees who are biased in favor of him? What if your right to travel is curtailed when no criminal charges have been filed against you and that you don't really pose a threat to the national interest/security of the country?

Nonoy: Hi Beth, I actually wrote there that the DOJ would better not block Gloria's travel, avoid such confrontation between the Executive and the Judiciary. Then if Gloria will not come back after oodles of criminal charges have been filed against her and husband Mike, then the SC will be in hot seat for such rush granting of TOR. Justice Carpio gave a good opinion of postponing the decision to grant a TRO or not by Nov. 22 immediately after the oral arguments.

Doods: Constitutional crisis or psychological diseases brought by the political tensions among our politicians? Where is the greater good and moving forward Christian attitudes among us which is so fascinating? A POSSIBLE ANARCHY WHEN PEOPLE START THINKING THAT THEY CAN DEFY COURT ORDERS AND STILL GET AWAY WITH IT!.

Nonoy: Well, not exactly ordinary people but a big agency in the Executive branch decided to defy the SC.

Jess: Hi noyskie, this is brinkmanship on the part of the government to show to the nation that they tried their best to stop the Arroyos from leaving. I understand the government position considering the gravity of the alleged offenses. Regardless of the outcome, the government bets that it will come up the winner if not in the courts then most likely in the bar of public opinion. Sometimes the pursuit of justice in this complicated world necessitates complex maneuvers that appear foolhardy at first glance but which history would judge as inspired if not genius.

Nonoy: Hi Jess. By now I'm convinced that the DOJ should just follow the SC. If Gloria and Mike don't come back, the Senate can possibly initiate impeachment against the SC Justices who rushed the granting of TRO, persecute Mikey and other family members involved in the corruption and criminal charges against the couple. There are plenty of remedies, all legal and all promulgating the rule of law.

Jess: It must be with a forced hand that they let go of them to complete the picture; then they mount the legal and political offensives you mentioned.

Nonoy: Yes, the rule of law almost always demand accountability somewhere, somehow. The Senate Blue Ribbon Committee for instance, which has initiated plenty of investigations about the PNP helicopter deals by Mike Arroyo, the cheating in the 2004 elections, etc., has an axe to grind against the SC justices who issued the TRO, should the Arroyos don't come back. The seed for impeachment of the justices is there already, ALL within the existing legal and constitutional rules.
-------