Boxing and Politics 1: Pacquiao as a Boxer and as a Congressman

I watched the Manny Pacquiao -- Juan Marquez 3rd fight today. My friend in NYC noted that Pacquiao's name and face is very visible in many places in NYC and other big cities around the world. Yeah, that's Manny.

When Pacquiao was walking towards the ring, politician Chavit Singson, well Governor of Ilocos Sur province, was with him. Chavit is a perennial non-boxing personnel on Pacquiao's close circuit before and after a fight. He looks like a leech seeking publicity in international sports media. He should get out there. 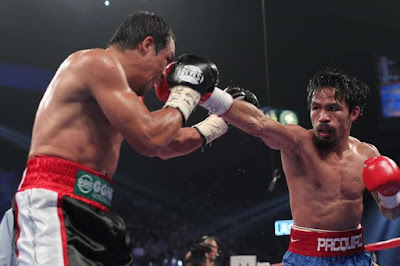 Personally, I was disappointed with the fight. Most Filipinos or other people who saw how Pacquiao clobbered his previous opponents on the ring (Cotto, Morales, dela Hoya, Margarito, Clottey, the British "hitman", etc.), me included, were waiting for Marquez to be knocked down even once, or be bloodied by Pacquiao's fast hands, but these did not happen.

After the fight and on my way back to the house, I pondered that Pacquiao's speed as a boxer has declined while his speed as a politician has increased. That he's ageing is no consolation as his opponent, Marquez, is already 38 while Manny is only 32.

Then I checked facebook, below are quick comments from some friends in fb:

1. Marquez fought well. Pacquiao's win is deserved but not very convincing that he conquered his greatest ring nemesis. Hats off to both gentlemen.

2. I'm not yet over this fight :)
--I think Marquez is the Pacman's "kontrapelo". A fourth fight will surely end up this way again - we've seen it three times.
--Ganyan talaga ang boxing, minsan panalo, minsan nadadaya :)

3. Great fight, but not very convincing since we expected the Pacman to dominate Marquez. It's the expectation folks, we know how it works - success is measured against the expected outcome - we see that in everyday life.

5. I think the judges' decision was due to Pacquiao not being tentative throughout while taking all of Marquez's punches and staying strong to the end. Pacquiao did enough to win the fight as reigning champion. 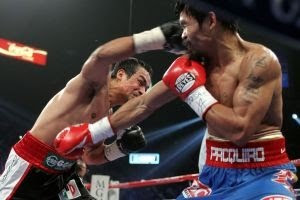 As a politician, especially as a national legislator, he has to attend various meetings, public consultations, events and parties, etc. Especially for a personality like Manny who is a globally-known athlete, I would surmise that the number of invitations to various events and parties could be several dozens each day. Even if he will just attend to 1 to 5 percent of such invites, these will greatly reduce his training hours to stay super- fit, and keep those seemingly bullet-speed fists.

From the above hypothesis, I can conclude -- facts and data will be confirmed or negated by time -- that the longer that he will stay as a politician-congressman, the slower he will be in the ring.

Then Gayweather will see it and soon will say, "Ok, I will fight Pacquiao." Or the Marquez camp will demand a Pacquiao-Marquez IV fight, and demand another round of big prize money.

Hours before the fight, I have another friend who said that "Despite the hype, I seem to be in no mood to watch two men pummel each other in a fist fight."

I told her that because of the fight, traffic everywhere in the Philippine's urban centers, also crime rate, would definitely go down. Because even the most rabid thieves and road maniacs would want to watch the Pacquiao fight, whether live or delayed telecast. :-)

I then postulated another hypothesis:

The more contact/brutal sports available, the less war around the world.

Why did I say this? I observed that the most aggressive, the most abrasive guys around the planet are attracted to play different types of contact sports -- boxing, karate, taekwondo, wrestling, UFC, soccer, rugby, hockey, basketball, etc. These aggressive guys have clear outlets. And ordinary people's thirst to see actual skirmishes, if not blood and fallen bodies, is channeled to watching full contact sports.

The good thing about full contact sports is that there are rules that are clearly defined, there are also referees and other individuals or entities who ensure that the rules are followed, that appropriate penalties like disqualification of players, are implemented. Thus, bloodied faces in boxing can prompt a referee to stop the fight.
-------- 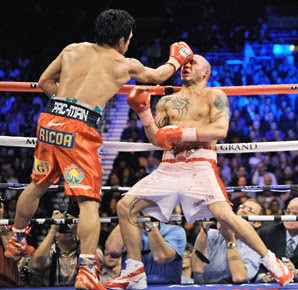 The other day, the Manny Pacquiao-Miguel Cotto fight materialized. It was Manny’s 7th quest for championship in 7 different weight categories and he has demolished all of his 6 opponents in other weight categories.

Manny Pacquiao is an icon in the Philippines. A towering athletic hero, the most popular Filipino, more popular – and 100 percent sure, most beloved – than the Philippine President. While discussions on politics, governance, religion, and global warming are 100 percent devisive, discussion about Manny’s boxing exploit is 100 percent a unifying topic among Filipinos. The only people I know who will dislike him are those who dislike him entering into politics. And those people include me. Manny is a hero, and will remain a hero until he grows old and die, if he remains a boxer until he retires, whenever that might be. But if turns into politics and run for an elective post, especially as a Congressman. He ran already for that post in the 2007 elections. Luckily, he lost. 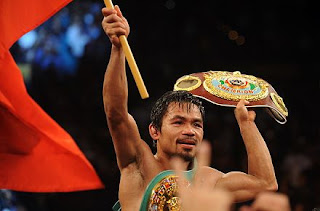 Two days before his fight, many of my Filipino friends in facebook were already posting about Manny’s fight in their status. It’s not surprising as Manny is the most popular Filipino in the country and around the world. On the fight day, November 14, he won against Miguel Cotto on the last round of the referee-stopped fight (Cotto’s face has been bleeding since round 2 up to round 12!). Before and after the fight, and even a day after his superb performance, there were still postings about Pacquiao on facebook. I guess it will remain so even in the next few days, especially when he returns back to Manila.

I watched the fight in a friend of a friend’s house in St. Louis, Missouri. My host in Terre Haute, Indiana, Leonid Nemenzo and his family, traveled to St. Louis to visit another Filipino friend there, John Encarnacion and family. We watched at John’s brother in law’s house, sipping beer and cheering while watching Manny’s power punches and Cotto’s bleeding face.

One Filipina friend asked in her fb status, “What is it about two grown men exchanging punches inside a ring that makes two countries and countless immigrant communities hold fiestas?”

I replied that it's the spirit of competition. Many people are braggart and hypocrite, they always claim, directly or indirectly, that they are “the best” in their field in the country or in the world. So the way to settle who's the better guy (faster runner, stronger boxer, higher jumper, etc.) is through competition. The rules are clear, the arena (say a boxing ring) is clear for the audience to see the fight or competition. And people love the openness and transparency of the competition. It makes watching sports events one of the favorite hobbies of many people.

This is true on a number of cases. But there is also exploitation, worse exploitation, in the absence of clear competition, in monopolization and heavy regulation economy. If we notice, almost all "regulators" in sports competition are non-government, like referees and umpires. They are not hired by the city hall or the provincial capitol or the Office of the President or Prime Minister. They are employees of the sports federation that organize the sporting events and competition. Only on issues where some players or teams question the judgment of their private regulators and referees, that they go to government courts for another form of settlement.

The main lesson here then are clear: One, we need more competition, in sports and in the economy, in order to remove doubts of claims of a “better” athlete or producer. And two, we do not need government for all or most forms of regulations. The rules are to be set by the players (producers and consumers, buyers and sellers, producers vs. producers under industry association regulations, etc.).

Manny Pacquiao’s competitive spirit should be used as an inspiration, if not a benchmark, in setting public policies. People love competition, so protectionists should stay out. Or government should not listen to them more often than people, especially consumers, who want more competition among many producers and sellers.
-------