(Note: in this series, here's Part 1, Ireland. Another related article will be Spanish problem: Euro or the State?)

There's another good article with 2 good tables by Daniel Mitchell last January 11, 2011, Which Nation Will Be the Next European Debt Domino…or Will It Be the United States?. 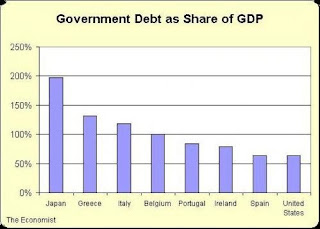 Dan says that while a high government debt / GDP ratio is one indicator of how fiscally wobbly an economy can be, it is not an important factor. Take this graph -- Japan has the highest public debt/GDP ratio among the rich countries, with government debt nearly 200 percent of Japan's GDP, 2010 data. But Japan is nowhere in the international news as having any serious fiscal problem in the short-term. It is European countries like Spain and Portugal, after the huge bail-out of Greece and Ireland. 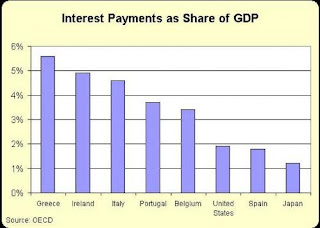 Now consider this second table. This would explain why Japan is far out from having any short-term fiscal problem as it is paying only more than 1 percent of GDP in interest expense for its public debt. Already bailed-out Greece and Ireland are at the top with about 5 percent of their GDP spent on interest payment alone. Coming in close to them are Italy and Portugal. Which means that these last two countries are deemed by debtor banks and investors as risky borrowers, hence they charge higher interest rates when these two countries borrow from them.

The US is paying close to 2 percent of its GDP on interest payment alone. Still far from what Greece and Ireland are paying, but about the same level as what fiscally wobbly Spain is already paying.

One explanation why Japan's interest spending is small is because the bulk of Japanese government's borrowings are made with domestic lenders -- the Japanese citizens and banks themselves. There is little exchange rate risks as the bulk of current and future debt payment, interest and principal amortization, will be valued in Yen, not in US$ or Euro or Chinese yuan or other foreign currencies.

Nonetheless, a debt is a debt, it has to be paid in the future by future taxpayers. Thus, if those huge public debt are no threat in the short-term, they will be in the long-term. So past and current fiscal irresponsibility by the governments of Japan, US, and other welfare states -- living beyond their means, expenditures larger than revenues for many years and decades -- will catch up on them.

Will they still be called "welfare states" when there will be too many taxes and fees that will haunt their productive citizens and expats working in their countries? When the monthly or yearly mandatory deductions are larger than what these productive people would get in the form of social and economic subsidies and services?
Posted by Bienvenido Oplas Jr at 5:28 PM