Remittances by overseas Filipino workers (OFWs) is an ever-increasing resource for the Philippine economy. Remittances were $10.7 B in 2005, $17.4 B in 2009, and is expected to possibly reach $20 B in 2010, but official figures are not available yet.

Most remittances are spent for the basic needs of the family members here -- building a new house (or improving an old one), children's education and family healthcare, daily sustenance. But a growing share is also spent on local investments and micro capitalism, like putting up small businesses.

A good friend of mine and a good supporter of MG Thinkers, Dr. Alvin Ang, an Economics Professor at the University of Santo Tomas (UST) in Manila, along with his colleague, Prof. Jeremaiah M. Opiniano from UST College of Journalism, won a big global competition. See the news report yesterday, 2 UST professors win top prize in prestigious international competition 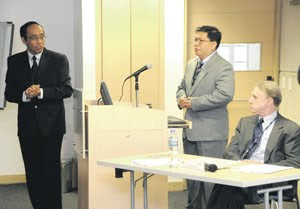 TWO Filipino professors have won the top prize in an international competition on research on development held in Bogotá, Colombia.

This is the first time the Philippines won the top prize in the Awards and Medals Competition of the Global Development Network (GDN)...

“Nearly 4,300 researchers representing more than 100 countries throughout the developing and transition world have participated in this competition to date. Nearly $2 million has been distributed in prizes and travel to finalists and winners."

The teachers said they wanted to test the tool, Ricart, on how remittances by overseas Filipinos to two fourth-class rural municipalities can be best directed for investment and development finance.

Alvin and his insitute in UST, the Social Research Center (SRC), has partnered with MG Thinkers in hosting two events in the past. In September 2009, two friends of MG Thinkers in the liberty movement, Alec van Gelder (then of IPN, London) and Barun Mitra (Liberty Institute, India) were in Manila to attend the Economic Freedom Network (EFN) Asia conference. A day before the event, the two gentlemen gave a talk at UST in the morning, then at the University of the Philippines School of Economics (UPSE) in the afternoon. 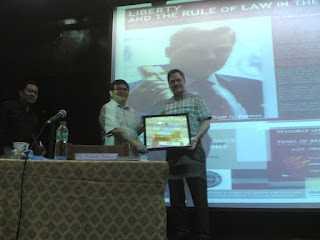 Then last July 2010, Dr. Tom Palmer, VP of the Atlas Economic Research Foundation (Washington DC, USA) came to Manila for a series of lectures arranged by MG Thinkers. Tom's biggest audience was in UST, an auditorium was filled with many students as Tom talked about the rule of law and the recent global financial crisis. In this picture, Alvin giving an award to Tom. Dr. EJ Lopez of the UST Economics Department was looking.

With this global award, the $30,000 cash prize with it for a very specific project of directing remittances to productive micro investments in two poor municipalities in the country, Alvin and his colleague are showing what really good civil society leaders can do to help the poor even without tax money involved.