This is essentially a repost from WUWT's article yesterday, NASA Sun Spot Number predictions revised again. The warming fanatics do not have this kind of literature -- the Sun and its effect on planet Earth's climate. That is why they cannot comprehend climate cycles of warming-cooling-warming-cooling. We are in a period of global cooling but they insist that "global warming causes the current global cooling." How idiotic that logic can be?

As a background, see these solar cycles (SC). The flat area starting from 1650 was the Maundeer Minimum where sunspot numbers (SSN) were very very low, almost zero at times. The next low SSNs in the 1800s was the Dalton Minimum. 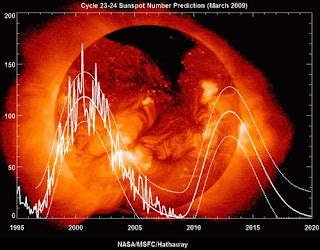 And here is the actual SSN as of this month. Consequently, NASA (in particular, Dr. David Hathaway) revised downwards its prediction of peak SSN to only 59, to happen sometime in June/July 2013. And that's almost the same level shown during the Maundeer Minimum.

After that solar maximum about 2 1/2 years from now, SSN will fall even lower as a new solar minimum will commence in the transition from SC 24 to SC 25.

That posting in WUWT, expectedly, has attracted many comments. As I write this, there were about 76 comments already. Here are two comments that I like:

On this basis, after about 2030 the global thermostat –apparently there is such a thing– will shake itself to pieces, simultaneously attempting to switch both On and Off. As cyclic wavelengths diminish, so weather-events’ amplitudes and frequencies will increase in proportion. Though chaotic, non-linear, complex dynamic systems are inherently unpredictable in detail (Edward Lorenz, 1960 – ’64), cyclical phenomena in context of long-term secular trends are well-defined.

Yes, global temperatures have been increasing since the LIA petered out from c. 1890; indeed, the thirty-year period 1980 – 2009 represented a cyclical warm-phase. But this involved no anthropogenic CO2 nor any other “forcing mechanism,” and populations now face an end to Earth’s “long summer,” our current 12,250-year Holocene Interglacial Epoch long overdue for a resurgence of median 102,000-year Pleistocene Ice Time.

SC24 has been flat for 12months, it is possible that we have seen the peak of activity already judging by the refusal to get into the normal ramp up, cycle max whenever that happens could be just like today. Its still early days but the revised NASA predictions lead one to think SC24 is a goner.

There are some interesting aspects observed so far. There was a regime shift around June last year where the type of sunspot changed. Large unipolar groups have dominated, these groups by nature have far less F10.7 and EUV output although magnetically they are very strong. The current F10.7 readings are too low considering the current spot activity. We have also witnessed a overall rise in magnetic strength and sunspot darkness over the past 12 months as we head towards solar max, sunspot 1148 yesterday continues this trend which flies in the face of L&P (although Leif will tell you differently)

The SC5/SC24 comparison graph is the one to watch with SC24 looking like it might be weaker than SC5.

Posted by Bienvenido Oplas Jr at 10:10 AM