A night with Singaporean libertarians

Singapore and its Big Brother government, to me, has been sort of an oxymoron of a "free market state." It is considered a free market economy because of its consistent high ranking in the Economic Freedom of the World (EFW) annual reports done by the Fraser Institute, the Index of Economic Freedom (IEF) annual reports by the Heritage Foundation and Wall Street Journal, Doing Business annual reports by the WB-IFC, and many others. Those reports are saying that it is much easy to do business, that there is less bureaucracy in Singapore, there is free trade, etc. Singapore and Hong Kong always trail each other in the top spot of those annual economic freedom reports.

But Singapore also has a politically harsh, single party state. Public criticism of the government and its top officials within Singapore is not easy. Individual expression of political and economic views that are harshly critical of the Singaporean government is very limited. A number of my Filipino friends who are working in Singapore say that it is a micro-managed economy. 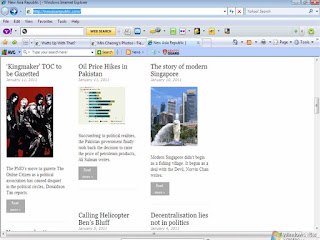 Thus, when I discovered the website of the New Asia Republic, I was intrigued. The website says that its mission is

Then I was able to trace and befriend its editor, Donaldson Tan. We became friends in facebook and in the Asian Liberty Forum (arbm2phuket@yahoogroups) that I moderate. 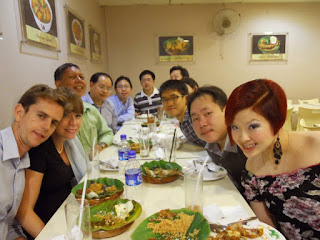 Last Monday, I went to Singapore for a meeting with some fellow free market leaders in Asia and London. That night, I met up with Donaldson and his NAR team. I was glad to see so many young writers and libertarians in that state. Donaldson is 2nd from right, beside him is Min Cheong, the energetic young lady who is NAR's special projects manager. Behind Donaldson are Say Peng, Christopher Pang, and Quek Dingfeng. To my right are Philip Stevens (from London) and his wife Debbie, to my left are Xingyuan Feng and Fu Weigang (from China).

It was a good meeting. We met at an Indonesian restaurant at Lucky Plaza, and that mall has lots of Filipino shops, restaurant, remittance center, etc.

Being an advocate of more individual freedom, more free market economy, more free trade, small and limited government, I try to seek new friends in the Philippines and abroad who share similar views with me. I was happy to meet them last Monday in Singapore.
Posted by Bienvenido Oplas Jr at 1:45 PM