(This is my article today at thelobbyist.biz)

Now certain sectors of the warming camp insist that the current weird weather of heavy snowstorms in the Northern Hemisphere, the cold front and cloudy sky in the tropics, and the heavy flooding in Brazil and Australia, are still due to “man-made warming.” The warm ocean causes more evaporation and precipitation, which dumps heavy rains on certain areas of the planet, like Queensland in Australia and Teresopolis in Brazil.

After the generally cooling phase (like the little ice age or LIA) some 2 to 3 centuries ago, warming phase set in, then cooling again as is happening now. That is for century level trends. There are also decadal or multi-decadal trend, like the Pacific Decadal Oscillation (PDO). 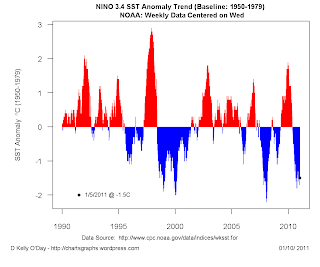 Here is the sea surface temperature (SST) anomaly of Pacific Ocean Nino region 3.4 which comprises the bulk of equatorial central Pacific, from 1990 to 2010. source: http://processtrends.com/images/RClimate_NINO_34_latest.png 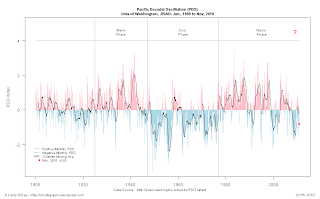 Another graph is that of a 110 years period PDO index, from 1900 to 2010. The warm-cool-warm phases are delineated. The global cooling in the 60s to late 70s for instance is very clear in this graph. Source: http://processtrends.com/images/RClimate_pdo_trend_latest.png

So the claims of the warming fanatics of “unprecedented warming” and “unequivocal, irreversible warming” is clearly disproven by scientific facts, especially by ocean temperatures. Note that three-fourth of the entire planet Earth’s surface is ocean, only one-fourth is land and there are even huge lakes and rivers along those land masses. So temperature and climate changes in the ocean drastically affect temperature in land masses.

Another claim by the said fanatics is that with “unequivocal warming”, ocean level is also experiencing “unequivocal rise”. So that a lot of flooding in many urban centers around the world can be explained by higher sea level compared to many decades ago. Is this true? 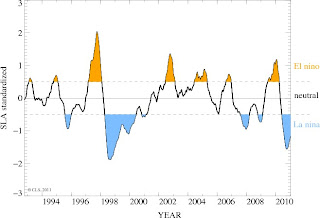 One measurement to check this claim is to construct a sea level anomaly (SLA) or “deviation from average” sea levels in the past. This graph below (units in centimeters) does not show upward or downward trend in sea level. Rise in sea level is followed by decline after several years. source: http://www.aviso.oceanobs.com/en/news/ocean-indicators/el-nino-bulletin/index.html

It’s those people with deep interventionist and socialist agenda, of accumulating more political power and control in their hands, like the many UN bureaucrats and their partners in national governments and foreign aid establishment, who endlessly push climate alarmism and scare.
Posted by Bienvenido Oplas Jr at 6:42 PM