BAGUIO CITY, Philippines - The temperature in Baguio City dropped from 10 to 9.8 degrees Celsius on Tuesday....

The coldest temperature in the nation’s summer capital was recorded at 6.3 degrees Celsius on January 18, 1961. PAGASA said it is possible that the same temperature will be recorded this year.

While temperature readings continued to drop, the number of people in the city who have fallen ill is rising.

Long lines of patients suffering from colds, cough, and fever have formed at the Baguio General Hospital's out-patient ward.... 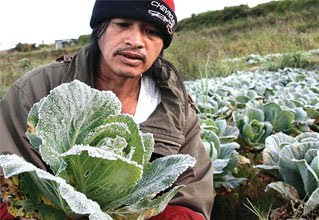 (picture of frost-cabbages in Baguio City from Manila Bulletin)

Saying the weather will become even colder in the coming days, state weather forecasters hinted on Wednesday that the temperature in Baguio City, the country's summer capital, might drop to 9 degrees Celsius.

Expect a nine-degree Centigrade weather in Baguio City. However, we are worried with the agriculture there. Frost may affect the vegetable industry there.

MANILA, Philippines - Weather bureau PAGASA on Tuesday said it will be a very rainy first quarter of 2011 in the Philippines due to the combined effects of the La Niña phenomenon and global warming.

In an interview on ANC, PAGASA officer-in-charge Graciano Yumul revealed only 11 storms hit the Philippines last year, way below the average of 20 to 22 storms a year.

Because of this, Filipinos can expect more and even stronger typhoons this year especially during the peak of the La Niña season from January to March.

A total of 26 persons have been confirmed dead and over 92,000 families or almost half a million people have been affected by continuous heavy rains in seven regions of the country, according to the National Disaster Risk Reduction and Management Council (NDRRMC).

The tally of the dead does not include three children who died from a measles outbreak that hit two towns in Mindanao.

The measles epidemic that hit Talaingod and Kapalong towns in Davao del Norte province came as the region reeled from rain-induced flooding and landslides.

Over 30 persons were also hospitalized because of the disease and eight of them were confirmed to have contracted measles, according to Mayor Basilio Libayao of upland Talaingod town.

MANILA, Philippines – Four people taken to the Manila Doctors Hospital on UN Ave., Ermita, last Tuesday night were found to have suffered strokes and heart attacks, as a result of the nighttime chill and uncontrolled eating during the holidays.

MANILA, Philippines—After Mindanao and the Visayas, Luzon is expected to experience rains but not as heavy and destructive as in previous days, the weather agency said on Thursday....

Heavy rains are currently experienced in the Bicol region and the Samar-Leyte area, forcing thousands of people to leave their houses in mountainous and low-lying areas for fear of flash floods and landslides.
------