My article last February 2010 in this blog, Decentralization and privatization, was recently published in Business and Finance Review in Pakistan, under a slightly different title, Decentralisation, privatisation and local govts. 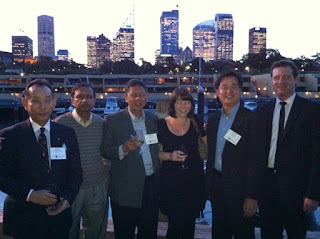 I thanked Dr. Khalil Ahmad, the Executive Director of Alternate Solutions Institute, Pakistan's first and only free market think tank, based in Lahore. AS Institute has a syndication service where some free market articles from abroad are published in some local papers. Khalil is 2nd from left in this picture, next to me, taken during the 4th Pacific Rim Policy Exchange in Sydney last September.

And just now, I learned that Khalil also submitted the same article to another paper in Pakistan, published today in The Frontier Post, Decentralization and privatization. 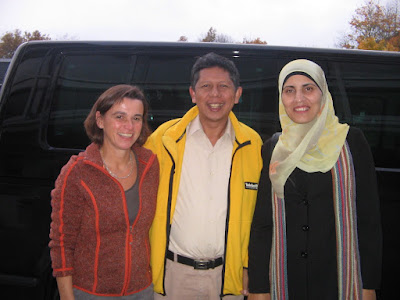 What I highlighted in that article, a discussion from a paper by Dr. Monika Ballin, "Local government and civil society", was the principle of subsidiarity. (Monika is the one on the left in this picture. To my right was Asma Ashfor from Palestine, during our seminar at the IAF in Germany in 2008.) I wrote in that article,


Thus, if the principle of subsidiarity is to be applied strictly, then most responsibilities should fall on private individuals, parents, firms, and citizens’ voluntary organisations, not on either national government or LGUs. This is part of a transition from decentralisation to privatisation. And by privatisation I do not mean the transfer of function from a government unit to a private corporation only. Not exactly. It can be an NGO, a cooperative, a sports and civic club, a church organisation, and so on.

The concept of "privatization" has been hijacked by groups who oppose it, those who love more government intervention (local, national or multilateral institutions). The smallest unit of any private enterprise is the individual -- the individual entrepreneur, individual consumer, individual supplier. When individuals band together to form a corporation, that firm is still not a person. It is just a juridical entity that has its own legal identity and corporate brand.

Thus, to "privatize garbage collection" does not mean that a private corporation alone should do that job as contracted by a local or national government unit. That function can be done by an NGO, say an environmental group, a civic organization, a cooperative, a church group, and so on.

There are many functions that are currently done by national or local governments that are better left to private groups and institutions. When government bodies focus on too many functions, they tend to forget what they are really meant for -- to protect the citizens' right to liberty, right to private property, right to life. As "government responsibilities" expand, so are the taxes, fees, penalties, regulations, authorizations, prohibitions that they impose.

So perhaps the operative term will be, "from decentralization to privatization, to more personal responsibility." And society will be more peaceful as the rent-seekers and spoiled brats will be deprived of power and resources to impose their egoism and irresponsibility on other people.


Meanwhile, may I repost here a paper by Dr, Monika Ballin:

Whenever the tasks and duties of the public on any level are being discussed, the influence of the principle of subsidiarity as well as the possibilities of decentralisation and privatisation come into the focus of attention.

The Principle of Subsidiarity

In short, the principle of subsidiarity means that the state and other entities of governmental administration should relieve private persons or organisations, as well as lower levels of state administration only of those tasks, which cannot be left to them without causing serious disadvantage for the community itself or for its members.

The basic assumption is that the smaller community should become active first of all. The national level should get involved only in those cases when the use of its measures becomes inevitable. Regarding this regulation means protecting the individual's freedom from the state's tendency to regulate each and every aspect in the life of the citizens and the society.

The principle of market economy also implicitly requires, that the state should carry out only those tasks which society is not or not sufficiently able to fulfil on its own. Yet it should withdraw in those cases, when private companies are equally qualified or even better qualified to take on these tasks. Accordingly, by liberal standards the market economy is generally believed to be superior to the administrative management system
of the state. Entrepreneurial activity is looked upon as private initiative and is therefore considered a role model, because in this case the initiative of state entities is not required.

These reflections are based on the general experience with public administrations. It frequently leads to the assumption that entrusting the fulfillment of tasks not to state authorities, but to the private sector offers the advantage of more efficiency and lower costs. The mechanisms of market economy usually force a company not only to constantly control its costs and minimise them whenever possible, but also to conquer new markets with innovative products and services. On the other hand the state is forced to engage in a constant comparison of costs and benefits in its economic activities to a far lesser extent, because possible losses can always be covered by public budgets, in other words, by taxes and fees.

This experience can also be applied to the relations between the national level and lower levels – states, provinces, districts, cities and municipalities.

Here, the term decentralisation can describe the fulfillment of tasks by the respective lower or even the lowest possible level. The responsibility for certain tasks is taken on by provinces or districts, even by cities or municipalities, instead of a central government. This way, tasks and duties are generally carried out more efficient, more concentrated on the needs of the citizen and more cost effective.

By implementing a decentralized structure of government and administration, it is at the same time necessary to provide those entities carrying out specific tasks with sufficient financial and personal funding. Either it is by installing an own tax and fee system for this entity or by paying money for the respective tasks.

The word privatisation is used in those cases, when duties of the cities or municipalities are transferred to the responsibility of private organisations, institutions or private companies.

There is a general agreement that not all state tasks can be decentralized and privatized. For example, a province administration cannot be entrusted with the task of safeguarding national independence and defence of the country, the protection of public security and law and order will not be left to the single individuals or private companies.

Yet there are developments, which also modify the quality of certain services and tasks as a result of technical or societal changes. For example, in former times the provision of fresh meat in the towns and cities of Germany was the duty of the state. For this reason slaughterhouses were managed by the municipalities. Due to technological development this system is obsolete today; functioning systems of frozen food transports put an end to the necessity of local meat production; supply was taken over by private companies.

On the other hand there is undoubtedly a trend showing that the administrative authorities on all levels will always be striving to redefine tasks and thus keep these tasks to the municipal or state administration. The only results are the creation of excessive burdens for the state budgets.

Therefore the fulfillment of tasks by state and municipal authorities must be subject to a continuous critical inspection which is called criticism of tasks.

As illustrated above, one of the roots of criticism of tasks is the increasing lack of finances in
the public budgets, including the budgets of the municipalities.

Another argument for criticism of tasks refers, similar to the simple rationalisation of administration, to the criticism of performance. It means the demand for the one-off or repeated scrutiny of executive measures, i.e. it deals with the question of how to fulfil the tasks of municipalities in a more effective way. Yet the need to fulfil them is not questioned at all. Within the framework of criticism of performance it is important, for instance, to determine the adequate requirements of trained staff and materials and to accelerate work routines.

It is therefore obvious that the criticism of aims in particular is an essential mission of liberal local politics believing in private and civil engagement. This is not only for reasons of cost saving but also of effectiveness of societal tasks being carried out as close to the people and as much serving directly the needs of the people as possible. All governmental entities, including the local ones should be managed like businesses alsways trying to optimize work procedure for better quality for lower costs.

Out of this consideration the liberals' claim for privatisation of public duties is understood not primarily as a relief for local budgets, but rather as a fundamental aspect of the role which the state and the municipalities play in the life of their citizens.
Posted by Bienvenido Oplas Jr at 5:55 PM