I constructed a graph from the interactive table of http://woodfortrees.org to show air temperature trend from 2002 to 2010 and this is the result. 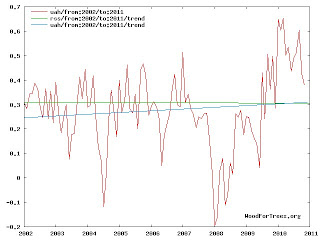 The recent big El Nino last year which lasted for about 10 months, pulled up global air temperature up to about 0.65 C anomaly or deviation from the 1979-98 average temperature.

So there. Global warming has stopped. Global cooling is setting in, slowly but surely.
Posted by Bienvenido Oplas Jr at 4:47 PM

Thanks Pierre. I dont know why woodfortrees does not have Dec. 2010 UAH data yet.