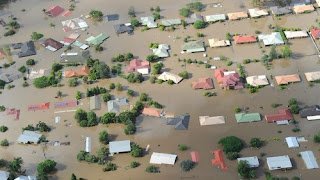 The on-going flooding in the south-eastern parts of Australia has created huge economic and human displacement to the people there. At least 20 have already died and more than 90 are still missing after many days of heavy rains and flooding. These 4 pictures are from various sources in the web. 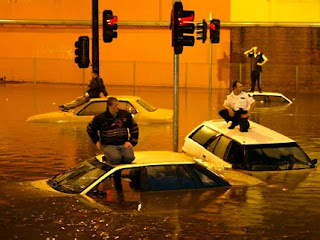 Queensland state is a major coal producing area. The flooding there grounded coal production and transport to a standstill. Estimates of the flooding's damage range from 0.4 up to 1.0 percent of Australia's projected GDP this year. 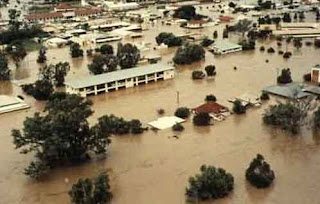 There are various explanations why this heavy flooding occured and why many government agencies and private sectors groups were not able to anticipate the extent of the disaster. But many of the affected areas including Brisbane could be natural flood plains in the past when population was still small. If the place is a natural flood plain, no amount of dams and huge drainage system can save that place when heavy flooding would occur, as is happening now. 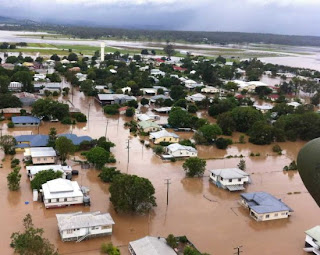 Similar to Bangladesh, New Orleans, and other low areas that are only protected by levees, dikes and similar structures. While there is big commercial opportunities in building wide human settlement in low-lying areas because of their proximity to river delta and ocean, there is also big danger when heavy flooding would occur.

Some warming fanatics though would blame "man-made warming" as the cause of the current disaster in Australia. They say that the Earth is getting hotter, so there is more evaporation, more rain clouds, more rains and more flood. So a cooler and wetter world is caused by a hotter world. Confusing or creating cause and effects, a case of incoherent and demented minds. 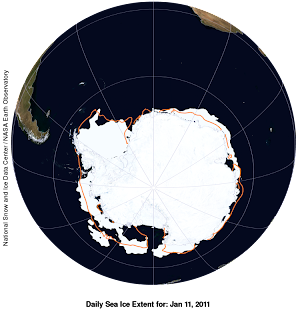 Here's a picture of sea ice extent in Antarctica, Southern Hemisphere's huge ice depository, as of the other day, January 11, 2011. Source of data is http://wattsupwiththat.com/reference-pages/sea-ice-page/.

At this time of the year, there are some 4.5 million sq. kms. of ice in Antarctica, going down further to its annual lowest level of 2.5 to 3 million sq. kms. of ice during February-March each year. The statement "warming and flooding in Australia and the SH is due to ever-melting ice in Antarctica" is simply stupid. Ice is melting-growing each year, both in the Arctic and Antarctica.
Posted by Bienvenido Oplas Jr at 10:54 AM