Theory vs. hypothesis, predictions vs. reality in climate debate

(Note: this is my article today in thelobbyist.biz. The 2 graphs below are not part of the original article, I only added them here to illustrate additional points.)

Theory is an explanation of an observed reality or data that has been tested and re-tested so that most researchers and scientists have agreed to its validity. Meaning, theory and data always conform with each other.

Hypothesis, on the other hand, is a proposed explanation of an observed reality, a statement that needs to be tested and proven for its validity. In short, hypothesis is an unproven and unverified theory.

Thus, if new data contradict the previously accepted theory, the scientific discipline expects or requires that data must prevail, theory must give way, and it should revert back to a mere hypothesis, to be subjected to another round of tests and more tests.

Skepticism is very much part of scientific discipline. A theory remains a theory so long as no major data contradicts it. If researchers and scientists do not practice skepticism, then they can be hoodwinked anytime by whoever are the first to proclaim that they formulated a particularly new theory.

Theory of gravity suggests that one should not jump from a tall building without a parachute or a huge net below, otherwise he/she will die. Whether there are 10 or 1 million attempts and “experiments” to test and possibly disprove it, the theory holds, 100 percent, zero contradictory data.

Theory of supply and demand says that if supply declines while demand remains the same or declines at a lower proportion as the decline in supply, price will go up. A strong typhoon flooded and destroyed thousands of hectares of vegetable farms. If consumer demand for vegetable remains the same and if there is no big supply from abroad (imported vegetables) or from other provinces, vegetable prices will go up. So far all historical data show that this is correct.

In the case of anthropogenic global warming (AGW) hypothesis, there are so many data that belie its claim and predictions. That proposition says that as more carbon dioxide (CO2) and other human greenhouse gases (GHGs) are emitted into the atmosphere, the world became warmer and will become even warmer in the future.

There are at least two operative terms that have become consequences of AGW claims. One is “unprecedented warming”, meaning the past (or current, as they claim) warming has no precedent in the past, no period in the past thousand or more years was warmer than current warming. And two, “unequivocal warming”, meaning unmistakable, indisputable and definite warming. Thus, future warming is definite, 100 percent, with all the horrible consequences like ocean level rise by 0.6 to 6 meters (IPCC and Al Gore projections) if human GHGs emission like CO2 are not controlled and significantly reduced.

There are at least four ways to test and validate all the above claims.

(Click to see a larger image. More discussion of this graph from A regional approach to the medieval warm period and the little ice age) One is to dig credible historical climate data reconstruction and see if indeed, there was “no period in the past thousand or more years that were warmer than the past century’s warming.” Just one period (of several decades or hundreds of years) that can be shown to be warmer than the past century’s warming, then AGW is also discredited because there was practically no human GHGs emission then as there was no electricity and cars then. 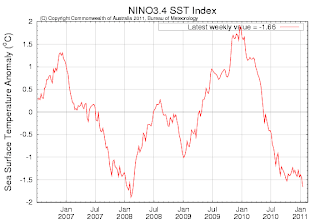 (SST anomaly in Pacific Ocean Nino 3.4 as of 16 January 2011, data from http://www.bom.gov.au/climate/enso/indices.shtml) Two is compare AGW’s “predictive capacity” with current global temperatures as the IPCC has been in existence since the 80s and been making the same analysis and predictions of “unequivocal warming.”

Three is check with existing theories in biology if indeed, CO2 is a “pollutant” gas that is harmful to humanity.

And four, if the first two tests show negative correlation – when it should be positive – between human GHGs and global temperatures, then give alternative explanations like natural geophysical processes (the Sun, clouds, water vapor, volcanoes, GCRs, etc.) that can explain the variations and changes in global climate and temperatures.

Many believe that if scientists and researchers were left on their own, the debate on climate would have been settled a long time ago. The big problem in settling the debate is when governments – the UN and various country governments – came in and implemented various programs and expenditures supposedly to “fight man-made warming and climate change.”

This political bias and the huge UN and government research funding immediately impacts negatively on the supposed independence of researchers and scientists. And this makes the climate debate highly dependent on political debates.
Posted by Bienvenido Oplas Jr at 10:35 AM