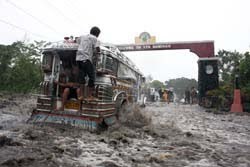 Over 12,000 displaced families in Albay head home after floods

AS FLOODS recede and the weather improves in the provinces of Albay, Sorsogon, and Catanduanes, displaced families were allowed to return to their homes in time to welcome the New Year, an official from the National Disaster Risk Reduction and Management Council (NDRRMC) said yesterday....

THREE children were killed by the landslide that struck Saint Bernard in Southern Leyte on Sunday as a result of the continuous rain that swept through some parts of the Visayas and the whole of Caraga region since New Year’s Day, officials said...

In Surigao del Sur the rains caused the Tago River to overflow, submerging the towns of San Miguel and Tago. The concrete fence surrounding the capitol building collapsed because of the swift current.

The Philippines' two season has wet months from June to October and dry months from November to May. It can be wet up to about mid-November, but generally, November to February are "dry but cold" months. Now we have heavy rains in the middle to the soouthern parts of the country until early January at least.

Terrible global warming.
Posted by Bienvenido Oplas Jr at 7:25 AM