In late October 2008, I attended the International Academy for Leadership (IAF) of the Friedrich Naumann Foundation for Liberty (FNF) in Gummersbach, Germany. The IAF holds about a dozen seminars per year on different topics, each seminar about 8 to 14 days long. The seminar that I attended was on "Local Government and Civil Society." Here's our group picture, we were 24 from about 10 or 11 countries from Asia, South America, Africa and Eastern Europe. 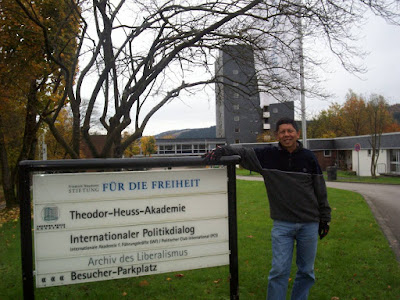 The venue was the Theodor Heuss Akademie (THA). It has complete facilities -- lecture rooms, meeting rooms, wide lobby, dining hall, internet area, library, 8-storeys dormitory, etc. The akademie is on top of a small hill. The city proper is below it. 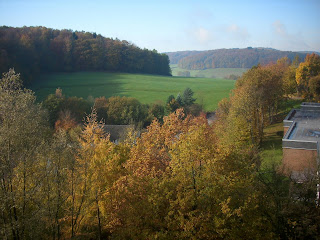 Gummersbach is a small and hilly city in the state of North Rhine-Westphalia, the richest among 16 states in Germany. It is 56 kms from Cologne. In front of the akademie is a forested and open grassland area, very serene and beautifully-landscaped. 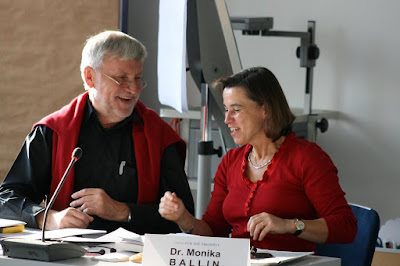 Our cheerful and very intelligent moderators were Dr. Monika Ballin and Dr. Arno Keller. They really have a good grasp of the philosophy of liberalism -- its emphasis on individual liberty, the principle of subsidiarity and the goal of a lean and limited government. They also smiled a lot. 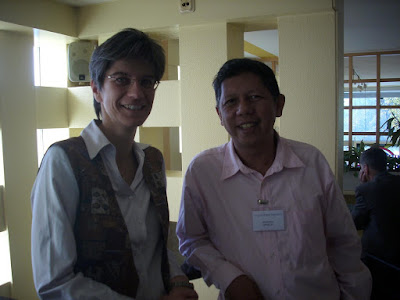 The Director of the academy is Birgit Lamm. A tall and soft-spoken lady who by now, has hundreds of friends from around the world, alumni of the academy. I am curious what Birgit would be writing because she tends to listen more than speak. So I guess her brains are full of different inputs and impressions of the participants and what those are saying. 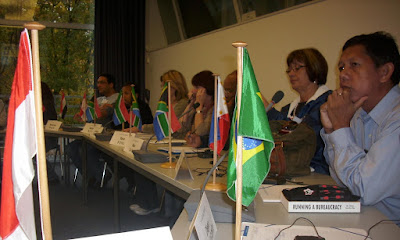 Four of us were from South America -- Argentina, Paraguay and Venezuela. They speak very little English, but we have two lady translators who would give simultaneous translation during the lectures. We wear the headphones when our friends from S. America would speak to listen to the translators. 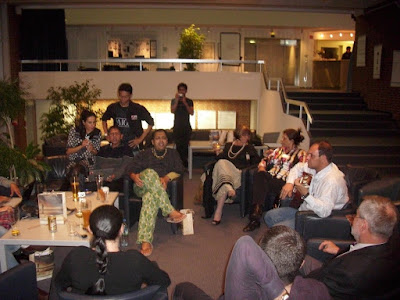 It's not all lectures and group dynamics, of course. We also have good time, in the evening, usually starting around 8:30pm. We gather in the lobby and just have a chat with each other, or we sing and dance. There is a piano in the lobby. Our Argentiian friend, Marcelo, played the piano and the guitar. They may not speak good English but they know and sing a number of songs by The Beatles, Billy Joel, Michael Jackson and other known Western musicians. Of course we also hum along with their Spanish songs and beat to their fast dance. 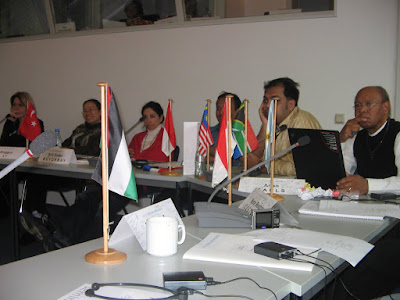 Ahh yes, we put our country's respective miniature flags in front of us everyday during lectures. The sight adds color and symbols to the participants. Some of us also were not that fluent in English, so we have to listen more attentively. 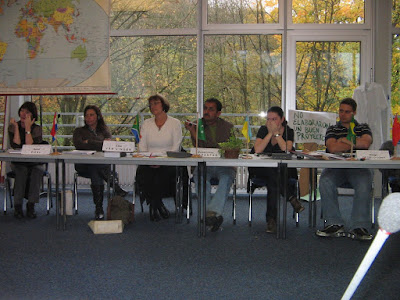 Another view of the participants. One side of the lecture room is facing the woods. It was nice to go out there during break time and noontime, feel the tolerable cold. 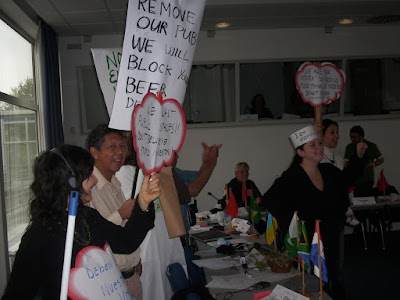 Aside from lectures, we also have group workshops and group presentations, to act out on certain policy debates. The "group acting" can be funny. Then we will assess each group after. Here, our group is protesting the closing of one municipal facility, we were the "protesters", while another group was supporting the move. I invented that plackard that said, "Remove our pub, we will block your beer delivery." :-) 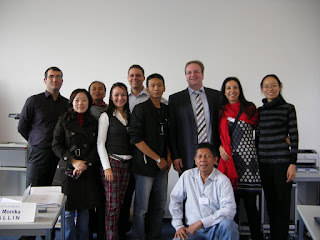 We also had some guest lecturers. Here, Mr. Uwe Ufer, a City Mayor near Gummersbach. Uwe was an independent politician who did not believe in belonging to any political party and wanted to focus his effort and time with the citizens than allocate additional time dealing with party matters and politics.

More pictures and stories later in Part 2 of this subject.
Posted by Bienvenido Oplas Jr at 7:52 PM