Last December 29, a known economist-theoretician, Ronald Coase, celebrated his 100th birthday. A columnist from The Economist wrote an article about him. 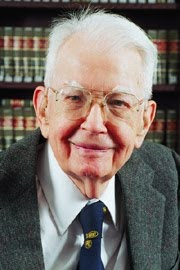 Why do firms exist?

...The economics profession was slow to recognise Ronald Coase’s genius. He first expounded his thinking about the firm in a lecture in Dundee in 1932, when he was just 21 years old. Nobody much listened. He published “The Nature of the Firm” five years later. It went largely unread.

But Mr Coase laboured on regardless: a second seminal article on “The Problem of Social Cost” laid the intellectual foundations of the deregulation revolution of the 1980s. Eventually, Mr Coase acquired an army of followers, such as Oliver Williamson, who fleshed out his ideas. In 1991, aged 80, he was awarded a Nobel prize. Far from resting on his laurels, Mr Coase will publish a new book in 2011, with Ning Wang of Arizona State University, on “How China Became Capitalist”.

His central insight was that firms exist because going to the market all the time can impose heavy transaction costs. You need to hire workers, negotiate prices and enforce contracts, to name but three time-consuming activities. A firm is essentially a device for creating long-term contracts when short-term contracts are too bothersome. But if markets are so inefficient, why don’t firms go on getting bigger for ever? Mr Coase also pointed out that these little planned societies impose transaction costs of their own, which tend to rise as they grow bigger. The proper balance between hierarchies and markets is constantly recalibrated by the forces of competition: entrepreneurs may choose to lower transaction costs by forming firms but giant firms eventually become sluggish and uncompetitive. 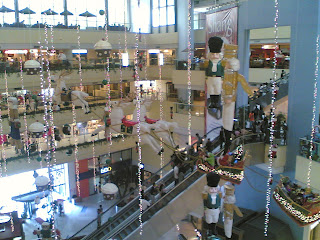 In microeconomics, firms competing with each other -- like so many shops and retailers of clothing, food, carparts, etc. -- are termed as "monopolistic competition" and not as "perfect market competition". A pizza house is a food shop but its product is different from other food shops that sell pasta, hamburger, sea foods, kare-kare and crispy pata, etc. There are "mini-monopolies" among dozens or hundreds of different food shops in one big mall or one big city.

A friend from another yahoogroups commented,

Ronald Coase's most significant contribution to Economics was to explain the rationale for firms - if individuals, acting in their best self-interest as economic agents, can negotiate their way toward the efficient solution (as explained by Adam Smith's "invisible hand"), why then does the economy require firms - companies where labor and other factors of production are on long-term "contracts", and an authority (the "entrepreneur" - the owner, management or board of the corporation) co-ordinates and organizes production....

Let McDonald's be as lousy as it can be, the authority-entrepreneurs who own Mcdo have command over their workers anyway. Then what? Mcdo collapses, consumers shift to Jollibee, or Burger King, or Mang Donald, or to other fastfood chains. Nothing is permanent except endless competition and change.

Firm central planning is different from government central planning. If a firm does not plan its moves, its competitors, existing or upcoming, will simply gobble it. When owners and managers of Victory bus line miscalculate their moves and become complacent, they will soon be gobbled by Five Star bus, Dagupan bus, North Luzon bus, even by Ceres bus liner.

Compare that with government central planning. If those state central planners make major mistakes and succeed in burying an economy into deep public debt crisis, who will gobble those planners? No one except bacteria when they die.

Free markets simply means free individuals. All markets are composed of individuals -- buyers and sellers, producers and consumers, young and old, rich and poor, men and women. If I am a banker and I want to hire a person's services at X pesos per month and that person says, "Nope, I want X plus 15 percent", then no contract can happen between us. He has the freedom to find another employer who will give him good terms, I have the freedom to find other analysts at a price that my firm can only afford. Zero coercion, zero taxation, everyone is free to enter certain contracts or not. The price system -- wages, bonuses, interest rates, exchange rate, rental, etc. -- is the main mechanism where voluntary exchange and contract between and among parties and individuals can occur.

All the mini-central planning, mini-monopolies in a monopolistic competition market structure, by firms and individuals, are consistent with free markets and the price system.

Firms fix or set their prices as most firms -- and individuals -- act on a "monopolistic competition" and not "perfect market competition". There will always be product differentiation, or service differentiation. Each different product would be considered as something "unique" with its corresponding unique price that is different from the price of other products in the same generic category.

Example 1, Tomatoes. (a) round-small-green tomatoes are different from (b) round-small-red, (c) oblong-small-red, (d) huge-green, (e) huge-red-flattened, (f) cherry-red, ... In the eyes and valuation of some tomato sellers and buyers, they are all different and would command different pricing.

Just one differentiation in specialization already constitutes a "mini-monopoly" of one professional economist from another.

So I go back to my earlier point -- firms (and individual consultants and entrepreneurs, etc.) exist because of specialization. Consumers and buyers of certain services want to consult or get the services of someone or some firm that is a specialist on something.

I am not sure if Coase's definition of "market transaction costs" is similar to the need for specialization.
Posted by Bienvenido Oplas Jr at 2:03 PM