(Note: Like the previous note, Weekend fun 3: Al Gore cartoons, all cartoons and pictures here were taken from the web, not one of which was taken or created by me) As global cooling continues, the "Al Gore effect" is highlighted in many countries and continents around the world. The call for more environmental regulations, more carbon taxation, continues as it does not matter where the weather and climate goes, warming or cooling, they are the same anyway -- caused by humanity.

The preacher declares: "Pay up more, send us more money, we will save the planet!" And humanity did so. Almost. Many of the new regulations and taxation on the agenda have been sidetracked by global cooling as public support for such additional regulations is declining. Two great saviours of humanity. Rock star Bono will save the poor of the developing world via more foreign aid and more government subsidies. Al Gore will save the planet from... sanity and reason towards climate insanity and lunacy. Remember, whether it is prolonged drought and lack of rains or prolonged rains and winter, they are the same -- caused by humanity and their modernization. 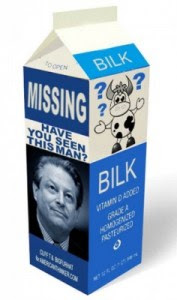 But where is the man, he has not been seen lately in the news more often.

Probably digging deep from the heavy snow in the US. Or moving around the tropics which have no threats of flight cancellations as there are no snow, yet, scaring people further that the end is near, unless they pay up to him, the UN and governments.

Or perhaps moving around to encash his various investments in carbon trading and finance as the leading climate exchange centers are either losing or closing shop, like the Chicago Climate Exchange. Aha, there he is -- the new "Consensus buster"! A carbon-less transportation system and world is Nirvana, it's heaven. No smoke, no pollution, no heat-trapping greenhouse gases. Yeah, let's go back to pedal power. Or better yet, back to arms power. This vehicle is made mostly of wood, a renewable resource, and minimal steel. If many developing countries will be hoodwinked into believing that modern transportation and carbon-emitting power plants are evil, then many people of developing countries will learn to go back to this type of human labor.
Posted by Bienvenido Oplas Jr at 3:13 AM