(Note: the original title of this paper was 'IPR, drug price control and taxes". I retitled it to reflect a discussion series on the subject starting in January 2011)

It is drug price control and taxes, not piracy and intellectual property rights (IPR) violation so far, that hound the Philippine pharmaceutical market. Not only innovator companies but also local generic manufacturers were adversely affected by the continuing government drug price regulation policy.

A WASHINGTON-based group of drug firms has retracted its earlier petition to the United States government that the Philippines be placed on the priority watch list of countries notorious for intellectual property (IP) violations.

The Pharmaceutical Research and Manufacturers of America (PhRMA) has instead recommended that the Philippines be merely retained in the regular watch list, after observing "notable strides" in the government’s willingness to hear out the private sector...

While challenges remain, the Philippine Government has made notable strides in engaging with the research-based pharmaceutical industry on critical intellectual property and market access issues," PhRMA said in a document dated Dec. 10…

PhRMA also took issue with the Maximum Drug Retail Price Mechanism which was authorized by the law, saying the scheme "has recently impacted [sic] a number of PhRMA member companies’ access to the Philippine market.

The Philippine government, through the Cheaper Medicines Law or RA 9502, wanted to bring down medicine prices by tinkering with IPR laws like drug patents which the government issued in the first place, and by drug price control. Issuance of compulsory license (CL) via local manufacturing by non-innovator companies of still patented drugs, or via parallel importation, are the most prominent provisions of the law.

The more than 20 years of generics promotion by the Department of Health (DOH) through the Generics Act of 1988 has improved competition among innovator multinationals and generic local manufacturers. There were already cheaper generic alternatives even for the most popular and patented drugs by the multinational pharma companies. 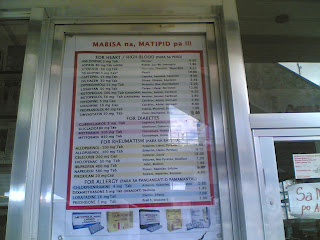 The most prominent example is amlodipine (anti-hypertension). When the DOH implemented the 50 percent mandatory price cut policy in 2009, the poor found the new price of P22.85 Norvasc 5mg tablet still expensive. So the poor continued patronizing the P8.50 generic alternative. Picture here are prices by one branch of The Generics Pharmacy sometime last year. Click on the picture to see a larger image.

The policy’s goal of making popular drugs more affordable to the poor was not attained.

The rich and middle class who used to patronize Norvasc at close to P46 a tablet greatly benefited as they shelled out only half that value after the price control policy. Local generic manufacturers who were selling their drugs at P18 to P25 were forced to further bring down their already lower prices as the price of the leading drug was forcibly brought down by the government to only P22.85. 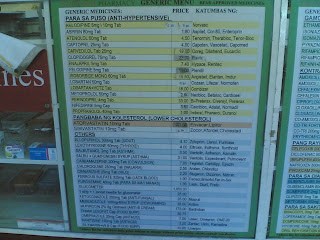 I saw this in one generic drugstore in one Uniwide mall, prices as of end-December 2010. Amlodipine 5mg was selling as low as P5.50 with equivalent ("katumbas ng") curative capacity of Norvasc. Atorvastatine (anti-cholesterol) 10 mg tablet, a generic was selling at only P20.50 while the innovator drug, lipitor, also made by Pfizer, is sold at P34.45, from its original price of almost P69 10mg tablet.

If competition among different drugs is working, what does the government care if one multinational company will sell its drug at P100 or P200 per tablet when the public has access to local generic drugs selling at only P10 or P5? Let the former overprice its product, lose its buyers, and commit business suicide.

The bigger challenge for government remains undone until now. Government should drastically cut, if not abolish, its taxes on drugs and vaccines, to make them cheaper and more affordable to the poor. The 5 percent import tax and 12 VAT on drugs contribute to at least 17 percent “more expensive” medicines. For instance, an imported medicine with a landed price of P20 per tablet, after the import tax and VAT have been applied, will immediately have a pre-retail price of P23.52 per tablet. Government is responsible for P3.52 price increase via taxes alone.

The lessons for all these are simple: One, competition is kicking hard among many drug products and drug producers, and government price control policy is distorting this dynamic competition. And two, government should instead look inward and drastically cut or abolish its taxes on medicines, to contribute to its avowed goal of “cheaper medicines for the poor.”
Posted by Bienvenido Oplas Jr at 7:02 AM