While reviewing some of my graduate Econ notes, I saw these two theories of migration.

Migrant networks are sets of interpersonal ties that connect migrants, former migrants, and non-migrants in origin and destination areas through ties of kinship, friendship, and shared community origin. They increase the likelihood of international movement because they lower the costs and risks of movement and increase the expected net returns to migration. These "declining costs" and "declining risks" results in a self-sustaining diffusion process with the following implications: 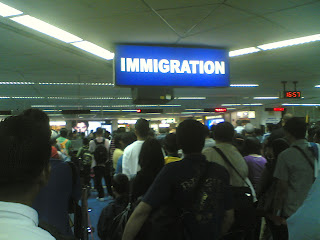 1. Once begun, international migration tends to expand over time until network connections have diffused so widely in a sending region that all people who wish to migrate can do so without difficulty; then migration begins to decelerate.

2. The size of the migratory flow between two ountries is not strongly correlated to wage differentials or employment rates due to the falling costs and risks of movement.
3. As international migration becomes institutionalized through network, it becomes progressively independent of the factors that originally caused it, be they structural or individual.

4. As networks expand and the costs and risks of migration fall, the flow becomes less selective in socioeconomic terms and more representative of the sending community or society.

5. Governments can expect to have great difficulty controlling flows once they have begun, because the process of network formation lies largely outside their control and occurs no matter what policy regimes is pursued.

6. Certain immigration policies, however, such as those intended to promote reunification between immigrants and their families abroad, work at cross purposes with the control of immigration flows, since they reinforce migrant networks by giving members of kin networks special rights of entry.

Once international migration has begun, private institutions, entrepreneurs and voluntary organizations arise to satisfy the demand created by an imbalance between the large number of people who want to move out and the limited number of immigrant visas the receiving countries offer. This yields hypothesis such as:

1. As organizations develop to support, sustain, and promote international movement, the international  flow of migrants becomes more and more institutionalized and independent of the factors that originally caused it.

2. Governments have difficulty controlling migration flows once they have begun because the process of institutionalization is difficult to regulate. Given the profit by meeting the demand of immigrant entry, police efforts only serve to create a black market in international movement, and stricter immigration
policies met with resistance from humanitarian groups.


I think both theories reinforce each other. The network among migrants, potential migrants and returning migrants allowed and encouraged the formation of institutions and support groups that respect or encourage more migration. Of course there are also groups and institutions that want to limit if not ban migration, say from a certain country or cultural/religious group, towards their country. But the latter are just reactions to the successful entry or wave of migrants.


I also like the implications and conclusions made by both theories, that governments (of both origin and destination countries) will have difficulty limiting or controlling migration. People move out in pursuit of freedom, and people in destination countries accommodate migrants also in pursuit of freedom. Like they want freedom from "dirty" and time-consuming work like taking care of the oldies in their homes, in  hospitals and homes for the aged, so they take in migrants to do such work at a rate much lower than if they  get locals.


Migration is freedom and freedom connotes migration and mobility -- within and outside one's community,   province, country or continent. The goals of governments that control or limit migration are mainly bureaucratic and to raise more state revenues.  There is big money involved in the various visa application fees and procedures.
-------