Two weeks ago, there was a big two-days UN global summit on how governments can control non-communicable diseases (NCDs). See Lifestyle Diseases 4: The UN on NCDs, September 25, 2011.

Because so many governments today, both rich and poor economies alike, have become highly welfarist or at least pretending to be one, governments think that personal irresponsibility of their citizens in abusing their own bodies should be highly subsidized too. That is why they think that more lifestyle-related diseases are a "drain on public resources."

Here is the chart from The Economist Daily Chart September 20th 2011. Global death from communic-able or infectious diseases + injuries and accidents, are no longer that worrying. It's the non-infectious or non-communicable ones. Some 63 percent of global deaths in 2008 were due to NCDs.

If governments and the UN-WHO will pour more tax money on preventing and treating NCDs, where is the distinction between personal responsibility and government responsibility in healthcare? People can over-drink, over-smoke, over-eat, over-sit, etc. and when they get sick, it is government responsibility to provide "quality healthcare" for them for free or at a highly-subsidized price? If the answer is Yes, then I think that this is a perfect formula for future fiscal bankruptcy and more government debt-initiated economic crisis.

I think a better formula is something like this: For infectious diseases, mainly government responsibility via vaccination, especially of babies and children. For NCDs, mainly personal and parental/guardian responsibility. Preventive healthcare via healthy lifestyle and eating will greatly help. People should as much as possible, get private health insurance, have ample savings for out of pocket (OOP) spending, with assistance from family and friends, and from private charity, voluntary and humanitarian organizations.
----------

Half year ago, I wrote this:

Cardiovascular diseases, hypertension, diabetes, cancer, these are among the major killer diseases not only in rich countries but also in developing countries like the Philippines. Gone are the days where the dreaded killer diseases were malaria, polio and ordinary flu.

There is a news report in yahoo today that I read, Diabetes out of control in many countries: study. It says,

CHICAGO (Reuters) – People with diabetes in the United States and several other countries do not get effective treatment to control their disease, U.S. researchers said on Tuesday, and health insurance, not personal wealth, plays a big role in determining which diabetics get good care. The findings suggest millions of people with diabetes are undiagnosed or poorly treated, putting them at risk of an early death from heart disease or significant complications of diabetes, such as blindness, chronic kidney disease and foot problems that can require amputations...

Diabetes is reaching epidemic levels. An estimated 280 million people, or 6.4 percent of the world's population, are suffering from it, according to the researchers...

In the United States, nearly 90 percent of adult diabetics - or more than 16 million adults aged 35 and older - fail to meet widely accepted targets for healthy levels of blood sugar, blood pressure and cholesterol.

In Thailand, up to 62 percent or more than 663,000 men surveyed are either undiagnosed or untreated for diabetes....

In October, the U.S. Centers for Disease Control and Prevention projected that up to a third of U.S. adults could have diabetes by 2050 if Americans continue to gain weight and avoid exercise.

The short discussion and picture below are from Medicinenet.com, Type 2 Diabetes Pictures Slideshow. 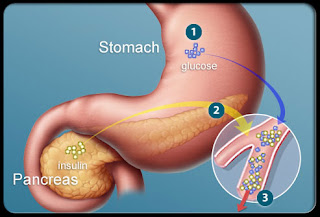 Diabetes is a chronic condition that thwarts the body's ability to change food into energy. This allows sugar levels to build up in the blood, which can increase the risk of heart disease, loss of vision, and other serious complications.

Factors You Can Control
1. Avoid being overweight, defined as a body mass index (BMI) over 25.
2. Avoid sedentary lifestyle.
3. Avoid abnormal cholesterol and blood fats, such as HDL "good" cholesterol lower than 35 mg/dL or a triglyceride level over 250 mg/dL.
4. Avoid high blood pressure greater than 140 /90 in adults.
5. Avoid smoking.

See, in helping prevent diabetes, there is nothing above that says "Avoid cutting budget for government healthcare." Much of things that are doable have nothing to do with government and public healthcare. Most doable things lie on healthy lifestyle, on personal responsibility aspect of healthcare.
-------

Email ThisBlogThis!Share to TwitterShare to FacebookShare to Pinterest
Labels: lifestyle diseases, NCDs, WHO