Sustainable Inclusive Growth (SIG) is being aggressively promoted these days as the next big goal of the government and the multilateral and foreign aid institutions. It is a relatively new but already abused term or topic. It was previously called "broad-based growth" or "bottom-up growth", all of which are accompanied by heavy lending by the foreign aid establishment (WB and ADB especially).
Yesterday, I attended the Pre-Conference briefing on Pathways to High and Inclusive Growth sponsored by the Center for Media Freedom and Responsibility (CMFR) held at the Asian Institute of Management (AIM), Makati. There were many participants from local media (GMA-7, BusinessWorld, inquirer.net, KBP, PPI, etc.) and NGOs. 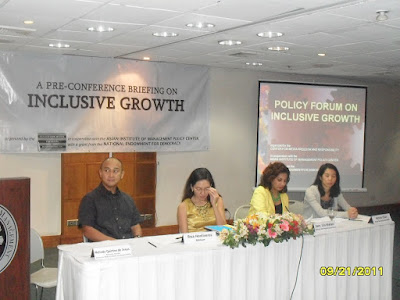 The speakers were (from left) Dr. Ronald Mendoza of AIM Policy Center, Ms. Risa Hontiveros of Akbayan, Assistant Sec. Lila Shahani of the National Anti-Poverty Commission (NAPC), and Dr. Natalie Chun of ADB-ERD.
Ronald gave an overview of the main international conference that will happen tomorrow, a full day activity also to be held at the AIM. There are a number of high-profile speakers like the Secretaries of NAPC, DOLE, the Minister of Social Development of Mexico (to talk about the CCT in Mexico, the Swiss Ambassador, etc.
Risa talked about certain social legislations and regulations that she wished were on hand to help the poor and marginalized sectors. Akbayan is a diluted socialist party-list. I say diluted because the socialist group BISIG which I used to be an active member in the late 80s, is a big part of the coalition but there are also non-socialist groups within the Party.
Lila discussed the 4Ps or Pantawid Pamilyang Pilipino Program or the Conditional Cash Transfer (CCT) program and related matters, while Natalie talked about the role of foreign aid like ADB in funding social protection programs. 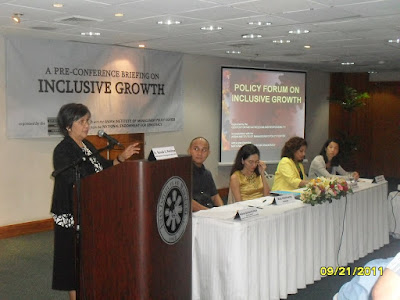 The main obstruction now to self-reliance and inclusive growth of the poor is government waste and irresponsibility. Take the Philippine public debt. Our interest payment alone for those public debt was P294 billion in 2010, P357 billion this year, and P333 billion in 2012. Principal amortization not included yet, only interest payment. When there was talk about imposing VAT on NLEX and SLEX, supposed to generate about P1 billion a year, or when the MRT subsidy of about P5 billion a year is proposed to be reduced, some people want to start a civil war already, and here is the government paying more than P300 billion a year on interest payment alone for its huge debt and annual budget deficit.

Such huge transfer of money from the poor and middle class taxpayers to the rich -- there is no poor among the bondholders, banks and other lenders to the government -- is a big hindrance to sustainable growth. The economic and financial turmoil in Greece, Spain, other European countries and the US are all rooted in high government debts.
(Note: Please check my earlier discussions when I gave a talk on this subject three months ago, Part 1 and Part 2, June 23, 2011)
The first to reply was Lila, she said that certain government programs and interventions indeed help the poor. She talked long but I didn't think it made much sense. Next to reply was Ronald who is also an economist. He said that at the heart of the things that I mentioned was the question of market and state, to what extent the government should provide for certain services to the public, and to what extend the market should be left alone to do its job.
Melinda gave me a chance for a follow up comment, thanks Melinda. I said that the "market and state" formulation is old. My focus is more on the division between personal responsibility vs. government responsibility. This week, there is a big UN meeting in NY where government leaders talk about addressing non-communicable diseases (NCDs) or lifestyle-related diseases. The communicable and infectious diseases like polio, flu, tb, etc. are now easily curable. So when people will drink and drink and have liver cancer or related diseases, they can just go to the government and demand that health is a right? Or when people smoke and smoke and have lung or throat cancer, or when they over-eat and over-rest and have hypertension, become fat, they also run to government to seek "health is a right" under universal healthcare? To me that is wrong.
Next to react to what I said was Vergel Santos, member of the CMFR Board of Directors and Chairman of the Editorial Board, BusinessWorld. He argued that the problem of the country is the ruling class and the elite, not government. They are too rich, the poor got nothing, government should run after their undeserved wealth, have real agrarian reform. Those who run away, government should go after them and impound their wealth, distribute to the poor.
Wow. I have no more chance to talk as there were others in the audience who were also raising their hands. I would have said that his proposal is absolving the government -- from the Constitution, Congress and Legislative franchising,government cronyism and business bureaucracies -- for creating monopolies and oligopolies, the guys and businesses who could be the object of his point. To continue demonizing the rich, especially those who became rich due to plain hard work, due to business efficiency and innovation, and asking government to run after their wealth to be distributed to the poor, is a proposal based on envy and heavy coercion.
Lila followed up on Vergel's comments, saying that the Filipino elites should indeed do more. Even Fil-Ams in the US, other well-off Filipinos abroad, should contribute their share and not turn their backs on the country.
My watch said it was already past 12 noon and my daughter was waiting for me in her kinder school since 12 noon. I bid Melinda a ba-bye and went out.
I shall go back to the big conference tomorrow anyway.
-------
See also:
Inequality 1: Rich Getting Richer is Good, August 29, 2009
Inequality 2: To Each According to his Needs... September 01, 2010
Inequality 3: Freedom, Free Market and Inequality, February 14, 2011
Inequality 4: Why Inequality is Good, May 10, 2011
Inequality 5: Comments to Why Inequality is Good, May 11, 2011
Inequality 6: On Social and Class Dominance, May 13, 2011
Inequality 7: Roger Federer, Manny Pacquiao and Free Market, June 19, 2011
Inequality 8: On Sustainable Inclusive Growth, June 23, 2011
Hayek 3: Inequality and Progress, May 19, 2009
Posted by Bienvenido Oplas Jr at 2:33 PM