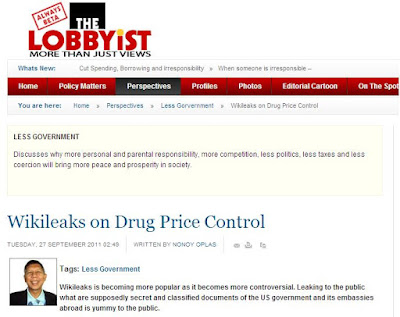 (This is my article yesterday in the lobbyist.biz, with original title, Wikileaks on Drug Price Control)

Wikileaks is becoming more popular as it becomes more controversial. Leaking to the public what are supposedly secret and classified documents of the US government and its embassies abroad is yummy to the public.

Some of the wikileaks documents that are freely available on the web now are the supposed cable reports by former US Ambassador to the Philippines, Kristie Kenney, on the drug price control policy that has adversely affected many multinational companies, mostly American and Europeans. 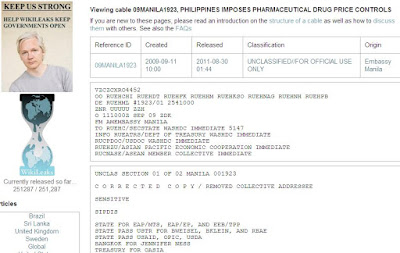 One report is this, Philippines Imposes Pharma-ceutical Drug Price Controls created September 11, 2009. I am posting two of the seven paragraphs of the report here and supply some data and my own observations.

5. Contacts at domestic generics pharmaceutical firms and drug distributors profess that the majority of local drug companies are against the new pricing regime. These controls have significantly reduced their cost advantage over brand-name medicines, and some claim they will lose market share as former generics consumers choose to pay the smaller additional cost to purchase cheaper brand name pharmaceuticals.

As a member of the DOH Advisory Council on Price Regulation (now called the DOH Advisory Council on Healthcare), I can confirm that this is true. I was there in several meetings from June to 2009 onwards of the Council, and the President of the Philippine Chamber of Pharmaceutical Industry (PCPI) and a few other federation leaders were very explicit in opposing the price control policy. Why?

Consider drugs A, B and C, same molecule and generic category, from companies 1 (multinational), 2 and 3 (locals) respectively. Drug A is branded innovator drug while B and C are branded generic drugs by the locals. Before price control, A’s price is P30 per tablet, B’s is P18 and C’s is P13. At this price range, they all serve specific markets and buyers, they all make sufficient profit, and they can comfortably co-exist and compete with each other.

After price control, A’s price becomes P15. B’s price is now the “expensive drug” and C’s price is not that far from A. To keep up with competition and retain their buyers, prices of B and C must significantly go down too, say to P10 and P6 respectively. Everyone is now adversely affected, their profitability is significantly reduced, if not eroded. What if C’s price cannot be brought down to P6-P7 without incurring losses? Then it will be forced to quit the market, temporarily or permanently (and company 3 must lay off some personnel if they cannot introduce new other products) while the number of drugs available to the consumers has declined.

Below is data from Watsons’ Drugstore. I am very thankful to their Director for Health Business Unit for giving me the go signal to share this to the public. 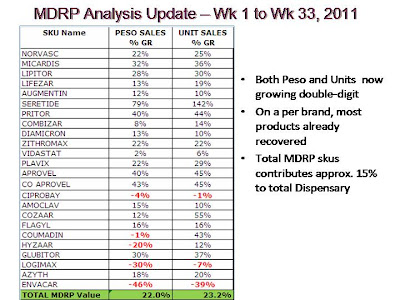 With a few exceptions, growth rate in both value and volume of the price-controlled innovator drugs by the multinational pharma has significantly increased to 22-23 percent this year over the previous year. And sales of those drugs 2010 were higher than their 2009. Which means one important thing: people, at least for the Watsons’ customers, have shifted to the innovator drugs and most likely, away from the generic drugs in the same molecular and generic category.

Back to the wikileaks report. There are some points in the final paragraph, the supposed commentary of the US Ambassador, that need clarification.

7. Although the government conducted public consultations on the implementation of this law, industry officials have a point about the lack of thorough scientific or economic studies underlying the government's actions to halve the price of these medicines. On the other hand, there is intense pressure for the current government to reduce medicine prices as the election season is nearing (reftel A), and calls for affordable medicines increase from civil society groups (reftel B). Prescription medication prices in the Philippines are the second highest in Asia (next to Japan), in a country where about a third of the population subsists below the official poverty line. In this instance, some multinational companies failed to recognize that cheaper medicine for the masses is an emotional and political issue. When price controls were placed on several of their most profitable products, it affected some companies' whole business model. Investment, and therefore, job creation by research pharmaceutical companies in the Philippines, will continue to be inhibited by such government market interventions. Furthermore, Philippine civil society's and government's success in lowering prices might encourage further interventions.

It is true that the DOH Advisory Council has met several times prior to the actual price control policy in August 16, 2009, especially on June 5, 2009, on whether a price control policy should proceed or not. There was also no list of drugs that were “candidates” for price control. Weeks before that, there was sustained, intensive and heavy pressure by then former Senator, former Presidential aspirant, Mar Roxas, to proceed with drug price control.

But to the big surprise of the members of the Council, by June 8, 2009, former DOH Secretary Francisco Duque and former Sen. Roxas already have the list of drugs to be put under mandatory 50 percent discount and presented to media. The criteria for selecting those 22 molecules were also illegal – they cannot be found in the Cheaper Medicines Law (RA 9502) nor in its implementing rules and regulations (IRR). The new four criteria were jointly designed by the IMS and DOH. There was also no scientific or economic basis for imposing a flat 50 percent discount – not 25 or 38 or 70 percent on specific drugs.

The supposed commentary above mentioned the high prices of drugs in the country. To a certain extent, true. But it failed to mention that government taxes on medicines – 5% import tax + 12% VAT + local government taxes – also contribute to high medicine prices here.

It is good that wikileaks has released these classified US government documents publicly. I am not sure though if these are indeed 100 percent correct, or some sentences and paragraphs were added or omitted. Nonetheless, my comments and data above stand, whether the stated document is correct or altered.
-------