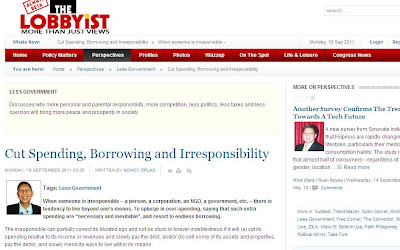 (This is my article this morning in thelobbyist. biz, with original title, Cut Spending, Borrowing and Irresponsib-ility. It seems to be my most popular article in the magazine as it is getting about a dozen hits per hour today :-))

When someone is irresponsible – a person, a corporation, an NGO, a government, etc. – there is tendency to live beyond one’s means. To splurge in over-spending, saying that such extra spending are “necessary and inevitable”, and resort to endless borrowing.
The irresponsible can partially correct its bloated ego and not be stuck in forever indebtedness if it will (a) cut its spending relative to its income or revenues and slowly pay the debt, and/or (b) sell some of its assets and properties, pay the debts, and slowly mend its ways to live within its means.

The incorrigible irresponsible though, would never do the above two measures. In the case of governments, what they do is (i) create new tax measures, or raise existing taxes and fees, or (ii) simply declare a default and ask for debt write off for some, or restructuring and postpone payment to even longer period. Let the future administrations worry about the wastes and excess of the past and current administrations.

Citizens of highly indebted countries like Portugal, Spain, US, France and Germany, simply want their governments to cut spending, not increase spending via Keynesian stimulus hallucination. Ordinary citizens, especially those in the private sector, are net taxpayers. The politicians and those in various government bureaucracies – local, national, and multilateral or foreign aid government bodies – plus the welfare dependents, are net tax receivers. Thus, there is a big gap in perception on how to solve the perennial public debt problem. The net tax payers do not want additional taxes to pay for those increasing debts. The net tax receivers want ever bigger governments to be financed by ever-higher taxes from the rich, the industrious and responsible people.
Here in the Philippines, the ever-rising public debt is also financed by endless borrowings – from foreign aid (WB, ADB, JICA, etc.) and from private lenders (individuals, banks, corporations). Below is a table of how scandalous the interest payment that we taxpayers in this country have to pay in order to bail out the continued wastes and irresponsibility of our political and bureaucratic leaders. These debts have high interest rates and other charges, from 4 to 10.6 percent p.a. or several times larger than the London Inter Bank Offered Rate (LIBOR) of around 1 percent. Table is lifted from Alas, Oplas CPAs blog, Interest payment on foreign debt securities, Philippines.

1.    These foreign debts were meant purely for budgetary support, ie, to finance the budget deficit.
2.    Only loans with more than $50 M in interest payment in 2010 (1stblock) and in 2012 (2nd block) are included here.
3.    The Loan Account name indicates (a) amount loan, (b) interest rate and other charges, and (c) year of loan maturity.

If a debtor has some sense of responsibility and sanity, it will take the high interest rate as a signal  and say, "Hoops, they are charging me high cost of borrowings, I might as well reduce, if not stop borrowing even temporarily."

An economist friend suggested, “BSP's foreign currency reserves (not counting gold and other forms of reserve assets) are already $59B. These are earning, what, 2% p.a. or less? In principle, forex reserves are assets owned by the Philippine Government. The latter can take half of the stockpile of forex reserves (or even less), and pay down the entire amount of USD denominated debt on your spreadsheet above.”

I am not aware of the technical or legal issues why such measure cannot be done by the government through the central bank (BSP). But if those issues are not too serious, the government should pursue such measure. The important thing is that the high public debt, especially those from high interest rate foreign debt securities, should be retired as soon as possible.

Greece is falling closer and closer to a debt default, which is option (ii) that we discussed above. Governments do not collapse even if they default on their debt obligations. Maybe the administration in power can collapse but government as an institution does not. The guys and entities who lent to the irresponsible government are also the other group who might collapse.

Government is force and coercion. That is why it often attracts the most horrible and irresponsible people in the planet masquerading as saviors of the poor and masses.