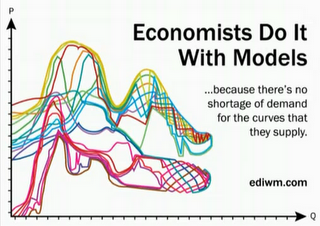 1. Economists do it with models.
2. They are armed and dangerous: "Watch out for our invisible hands."
3. They can supply it on demand.
4. You can talk about money without having to make any.
5. You get to say "trickle down" with a straight face.
6. Mick Jagger and Arnold Schwarzenegger both studied economics and look how they turned out. (so did gary lising, jon santos and the guy who created dilbert)
7. When you are in the unemployment line, at least you will know why you are there.
8. If you rearrange the letters in "ECONOMICS", you get "COMIC NOSE".
9. Although ethics teaches that virtue is its own reward, in economics we get taught that reward is its own virtue.
10. When you get drunk, you can tell everyone that you are just researching the law of diminishing marginal utility.

Three professionals -- a physicist, an engineer, and an economist -- survived a plane crash and went to a small island, ala Robinson Crusoe (?) island, nothing much to eat there nor are there other islands with people to trade with. Luckily they got several boxes of canned food that also fell from the plane, but they got no can opener. So the natural challenge is how to open the cans so they can eat.

Engineer improvised wooden sticks to open the cans, fail.
Physicist used fire and heat (rubbing stones to produce fire, etc.) to melt the can and hope it will open, fail.
Economist's turn, he said, "Let's assume that the cans are open."
------

In front of St. Peter were 3 souls.
St. Peter to soul 1, "What's your IQ? soul 1 said "300!". St. Peter said, "Great! we can discuss Einstein's theory of relativity and Svensmark's Sun-GCRs-climate theory. Wait for me on that door.

Same question to soul 2, the latter replied "200!". St. Peter said, "Good! we can discuss about reptiles, amphibians and dinosaurs. Wait for me on that door.

Q: Why do Economists provide estimates of inflation to the nearest tenth of a percent?
A: To prove they have a sense of humour.

Q: Why did the economist cross the road?
A: It was the chicken's day off.

Q. What does an economist do?
A: A lot in the short run, which amounts to nothing in the long run.

Two economists meet on the street. One inquires, "How's your wife?" The other responds, "Relative to what?" To an economist, real life is a special case.
------

Email ThisBlogThis!Share to TwitterShare to FacebookShare to Pinterest
Labels: Economics