Two jokes here, which attracted a series of other jokes, on functions, equations, coordinates, and crocodiles. The two original jokes are from Dennis Arroyo's facebook wall. Dennis is a friend from UP School of Economics. The image is taken from other friends' fb walls. Enjoy.
--------

1. A gloomy equation went to my office and shared with me his love life problems. He lost his X and couldn't figure out Y. 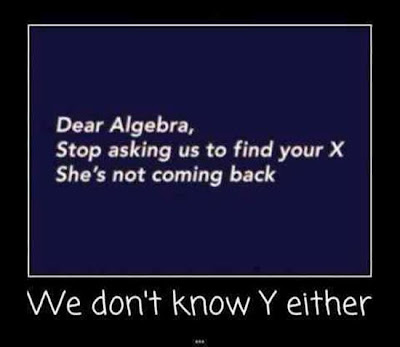 The equation thought that romance was as easy as pi.

I advised him that he should try to stand out. The equation could use some differentiation.

infinitely frustrated because he and his x were divided by nothing...

I first tried to cheer up the equation by bringing him to watch a show by the band The Logarithms.

The equation complained that his X did not give him enough degrees of freedom.

Did you consider that maybe X and Y did not share any common denominator?

Or was it really Y's main correlation and hidden intention to intersect and co-opt X's prime assets.

There is some rumor going around that Y was tired of X's small inadequacies. He may have been keeping his genetic defect - having truncated XY chromosomes a secret.

I told the equation that his speech could use a little less hyperbola.

tell him to keep his error terms in control!

But he says that he is just typical, his error terms are normally distributed.

You mean they're not skewed?

The equation admits that his geeky mind is a bit skewed. He humbly concedes that he is among the ordinary least squares.

Oh, but you said he was gloomy, right? Then he interacts a lot with dummies.

The central problem, said the X, was that there were limits to her patience with the equation. That was her central limit theorem.

So her patience did not approach infinity then.

in other words- it just wsn't reciprocal.

perhaps he should derive the root of the problem. in all probability the expected answer can be solved by fixing what's missing in I instead of U.

tell him that they were not meant to intersect; level of confidence is way too low for the relationship to be significant.

Is that conclusion from empirical evidence, projection from life experience, statistical inference or simply by definition of terms hence (as we say on the street) a totoology (tututs). Tata.

though angles so oblique, at some point meet, the gloomy equation and his X have lives that, like parallel lines, will never meet.

They never met because X always takes the hypotenuse when they walk on a triangular path.

If life is a polynomial function,then I'm in one of the abscissa. I just don't know if it's a relative or an absolute one.


2. While totally bound, that giant crocodile caught in Agusan Sur did some small talk with his captors. "You know, my son is very successful abroad. He's now luggage for Bulgari."

and his brother is a congressman.

A giant crocodile has been found. Please count the members of Congress to see if someone's missing.

Pork daw ang pinangbitag. Pork but not in a barrel!
Posted by Bienvenido Oplas Jr at 6:34 AM