Last week, I wrote this:

The "war dance" rhetorics over the Spratlys, and the huge lobbying for more tax money to buy more fighter planes, more battle ships, more missiles, and possibly, getting a submarine, is alive and kicking. Just observe these news and opinion titles and the word "war" is clearly emblazoned. 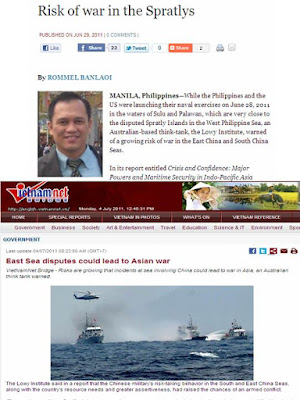 Picture above, Risk of war in the Spratlys by Rommel Banlaoi, Newsbreak, June 29, 2011.

Picture below, East Sea disputes could lead to Asian war, Vietnamnet, July 4, 2011. "Asian war", tsk tsk. I have not seen any news report yet from other claimant countries like Malaysia, Brunei and Taiwan. Do they also call it as possible "Asian war"? 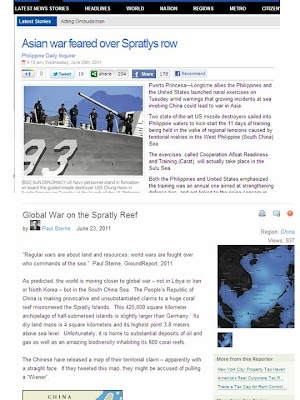 In this news report from the Inquirer, another "Asian war" mongering. Do the local media people really want a war, or at least prolonging the "word war" so they can sell more?

These are all "war dance" rhetorics, and possibly, some government policies. BIG governments like the communist states of China and Vietnam, are not satisfied pointing guns on the heads of their citizens ("support the single party communist party or else"), they want to extend the guns to their neighboring countries.

Now many sectors want the Philippine government to join the war dance, through what? MORE TAXES, more government fees, what else. Where will government get the money to buy more fighter planes, battle ships, ammos and missiles? Government is a penniless institution that becomes big and wealthy through endless confiscation of the citizens' money. For what purpose, to "fight poverty" by "developing" some islands and atolls in the Spratlys"?

We will soon spend less for the private education of our children, for the private healthcare of our families, for our simple joys in local or foreign travel, so that the government will have more money, more money to buy jet fighters and if possible, a submarine, to "develop portions of the Spratlys."

BIG government sucks. They fool and steal big time. From the man-made warming scam to the Spratlys war scam.

Meanwhile, here's a good article written by another friend who teaches at the UP College of Law, and specialization is international maritime law, Jay Batongbacal, PH correctly stands its (maritime) ground, Inquirer, June 29, 2011. Jay wrote,


China posits its claim to sovereignty and jurisdiction over the entire South China Sea, enclosed within the so-called “nine-dashed lines” map, based on ancient Chinese voyages and maps made 2000 years ago.

But claims to sovereignty and jurisdiction merely on the basis of ancient explorations have no credence in modern times. They are inconsistent with the historical record demonstrating that such voyages were never for conquest or territorial acquisition. Instead, they were for trade with the diverse pre-colonial peoples who inhabited the lands around the South China Sea, some of whom later became the first Filipinos.

About a century before Magellan’s arrival, China stopped all its maritime activities and abandoned all its foreign interests. The Chinese lived in Southeast Asia’s coastal communities as traders, not administrators. Local sultans and datus controlled the waters, some even demanding tributes for passage. So if anyone actually controlled any portion of the South China Seas in the past, they were more likely our Southeast Asian ancestors, not the Chinese.

We need more legal research, more diplomacy work, zero additional military spending for the Spratlys. We better get 10 or 50 or more Jay Batongbacal type of legal experts and researchers and wage a strong diplomatic "war" at the UN, various international venue (APEC, ASEAN + 6, etc.). The communist government of China will be ashamed internationally if their claims are exposed as a scam. And we will not need even a single additional fighter jet to achieve that. Do not listen to the AFP-DND-allied bureaucracies' lobbying for more tax money for their spratlys adventure. The corporate military suppliers and their hosts in the war dance noise are salivating at another large scale robbery of Filipino taxpayers' money.

We're in the 21st century already and governments are still in the "let's go to war" mentality. Private enterprises like google, facebook, yahoo, youtube, wordpress, etc. are creating endless connections, friendly connections, among people from all countries, except those countries dominated by notorious communists like the China government.
------

Today, I got engaged in a twitter debate this morning with Ruffy Biazon, a former Congressman. After I replied to him and Ces Drilon, a broadcaster from ABS-CBN News, our debate started. Below.

@Noysky It's not financing a war. It is investing in defense.

@ruffybiazon "investing in defense" or investing in offense, the same. We cant even develop Sulu, Tawi-tawi, we want war to develop Sprat?

@Noysky Assertion over SPratlys in not just about owning real estate. It's about harnessing the natural resources there.

@Noysky Pagasa could serve as a forward defense post for our Malampaya fields, presently generating revenue for the Philippines

@ruffybiazon Palawan, Sulu, have nat resources too, we cant develop them even if we dont buy new jetfighters. Now we "develop" Sprat.

@Noysky Spratlys is within our claimed Exclusive Economic Zone. It will not become exclusive if we are unable to defend it.

@ruffybiazon agree that certain islands in the Sprat are w/in our EEZ. Let's hire 50, 100 top notch marItime lawyers, expose China at the UN

@Noysky NO we don't need jet fighters to develop SUlu and Tawi2. Problems there are local peace and order, not foreign intrusion.

@Noysky And I also dont agree that we need jet fighters now. We might afford to buy them, but we cannot afford to operate dem. AT dis time.

cesdrilon Cecilia Orena-Drilon
@Noysky @ruffybiazon there are anti aircraft weapons. Some are rusting, others are said to be working, though no test firing has been done.

@ruffybiazon Spend on top notch maritime lawyers & diplomats, not jetfighters. China can demolish all mil def but not legal battle at d UN.

@Noysky Diplomacy shouldn't be abandoned. But neither will it work by itself. We must be able to maintain our present hold in KIG.

@Noysky Our advantage is proximity and present occupation. We need to defend that advantage.

@ruffybiazon Atty Jay Batongbacal of UP Law wrote a good piece that can shame China over KIG, other islands. We need more minds like him.

@Noysky NO debate about diplomatic track in addressing Spratlys issue. But I stick to backing it up with an improved defense capability.

@ruffybiazon I like your Dad's position. The "battlefield" over Spratlys is at the UN, other intl. fora, not at the WPS or SCS.

@Noysky Then your understanding of his position is incomplete. Because we have the same position---use diplomacy, defend your property.

@ruffybiazon Basilan has 2x land area than Sing, but Sing GDP is larger than entire RP GDP. Devt has little to do with more EEZ, more mil.

@Noysky Basilan cannot be compared with Singapore. Apples and Oranges.

@ruffybiazon It's comparing RP & Sing. Use of Basilan only to highlight how small Sing's land area. Sulu archip abt 5x Sing land area too

@Noysky Even if its SG vs. PH. I have always been averse to comparing the two. Different factors contribute to situation of the two...

@Noysky It's not a refusal to learn. But we should always pick the best, not swallow the rest. There's no fixed template.

@Noysky The PH Air Force /AFP/DND thinks its necessary to defend it. That's why they're planning to get jets. I agree w/ defense, not jets

@Noysky I wouldn't resort to such cynicism abt AFP/DN.D Their mandate is to defend the country. We must give them the wherewithal to d

@Noysky The entire government suffers from instances of corruption. But our fear of corruption shouldn't hinder govt from functioning.

There are some entries there attributed to me but were actually tweets from you. Hope you could correct it.

Thanks for posting! It was a pleasure engaging you in this discussion.

You're welcome, Ruffy. Thanks for the engaging debate too.