In less than two weeks, on August 2, the US federal government's public debt of $14.294 billion threshold where the government can no longer borrow, will be reached. That is why the noise on "debt default" is becoming louder. See my paper on this 3 days ago, Fiscal irresponsibility 11: US debt default talks.

Please note that these figures are public debt by the federal government alone. Not included here are debt by local governments -- states, counties and cities. Those lower government levels have their own share of debt crisis too, like the state of California.

The extent of fiscal irresponsibility, of persistently living beyond their means, criss-crosses various levels of government.

The next chart is from Dan Mitchell of Cato, Mr. President, Here’s that Balanced Approach You Keep Demanding, July 15, 2011. 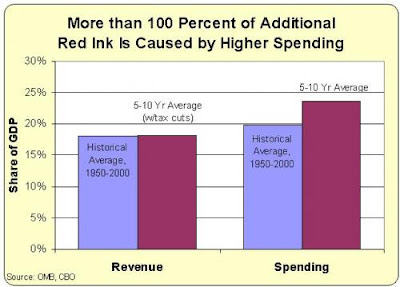 Over-spending, then over-borrowing to finance the excess spending. This is the plain and simple reason why the US government is digging deeper in public indebtedness and the various economic, financial and political problems attached to it.

There should be other potential government revenues aside from more taxation. Privatization of many government assets (land, corporations, banks, universities, hospitals, etc.) is one important policy tool. But it is not palatable to the political class. And this attitude is not unique to the US. There is deep insecurity and hypocrisy in the political and bureaucratic class not to entertain this policy tool.
-----

There is a good graphics I saw from CQ.com, Debt limit of the US federal government from 1980 to 2011. There are 4 lines there. Topmost is US GDP, next (light brown) is the debt limit, below it is the debt subject to debt limit (light green) and further below (dark green) is marketable debt.
The debt limit started rising more frequently since 2003. And the gap between the size of GDP and debt limit used to be far until about mid-2008. Since then, the gap between the 2 has become narrower and narrower. The two almost intersected in early 2010. That's when the US government was bailing out many big private corporations using money it borrowed from many sources. Click these charts for a larger image. 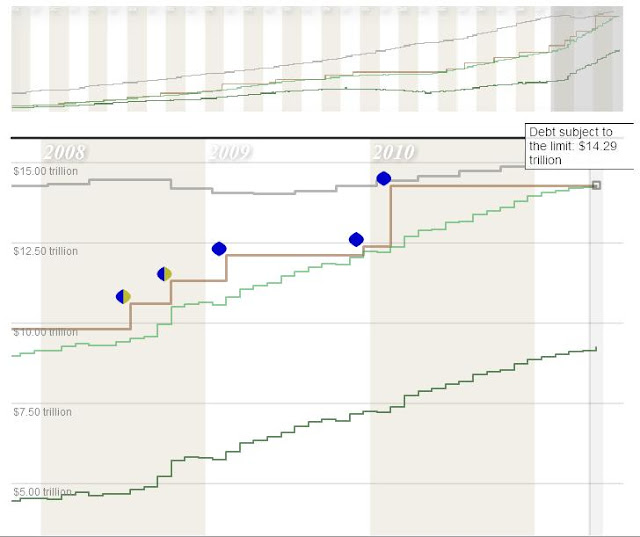 This table is interesting. It shows who lent how much to the US federal government, as of end-March this year.
Domestic private investors lent $3.23 trillion while foreign investors, mostly governments and foreign central banks, lent $4.48 trillion. Of the latter, the Chinese government lent $1.15 trillion, Japan government lent $0.91 trillion. Graph source, Who holds the federal debt. 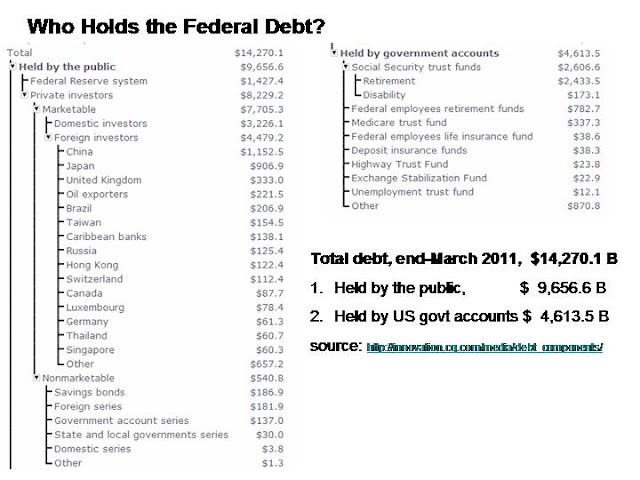 Chart source below, The Economist, Daily Chart July 28th 2011. It shows the overall debt over GDP ratio for both the US and Canada. I just copy-pasted them from the interactive graph of The Economist. All 4 sectors -- financial, government, non-financial business, and households, contribute to rising overall debt. 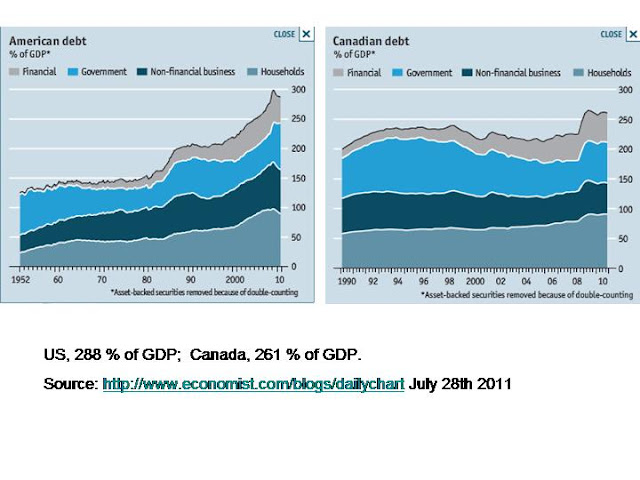 Fiscal irresponsibility of the government is often matched by corporate and household irresponsibility, of further accumulating more debt. Having debt is normal, especially for investments or for emergency spending. But having an ever-rising debt is not normal, or not proper as the cost of their future payment becomes more and more difficult.
Posted by Bienvenido Oplas Jr at 7:36 PM

In the end, it comes down to people. Is America capable of being a self governing society, anymore? Is Greece? Is the Philippines?

We are literally developing societies where the number one policy objective is assisting Person A to steal from Person B. The number one driver of debt and deficits here are transfer payments from the productive, to the non productive. The old at 65. Government workers at 52 (after 30 years of work.) The drug/alcohol dependent. The lazy. The women who do nothing but have kids for a living. All the health care these groups can consume. The thing you mentioned are part of it, but pales next to transfer payments. And best yet, all these groups vote.

Add to this a corrupt journalism profession, personified by the Paul Krugmans, insisting we can be Greece, and yet not suffer the same consequences. A Marxist President who has learned well the demagoguery of other leftist leaders past and present, and yes, we've got quite the mess here.

Exit question. When does China stop funding out foolishness?

Well said, Todd. Social engineering towards forced equality by the central planners is backfiring now. The expensive welfare state has created a big number of welfare-seeking but highly articulate people whose expensive entitlements can hardly be withrawn. The "debt default" scenario will be a shameful part of the American economy. The rule of law culture makes America a stable society to do business with. If America will default on its debt obligations, it will endanger, if not throw away, that rule of law culture.

These kind of post are always inspiring and I prefer to read quality content so I'm happy to find many good point here in the post. Writing is simply great! Thank you for the post.