Among the most abused, also hypocritical term in public finance in the country, is "freedom from debt." For instance, there have been many attempts in the past by members of the House of Representatives to "dishonor the automatic appropriation for debt payment" so that "unjust loans" will not be paid. There is also an old but still big association called the Freedom from Debt Coalition (FDC).

If we look around, there is no counterpart group called Freedom from Borrowing Coalition (FBC) :-)

Seriously, one will NEVER have freedom from debt if one's mentality is to borrow as much as possible to finance each and all subsidy and welfare programs that one can think of. Thus, it will be a rising public debt situation. Like what is happening now in the Philippines, the US, Japan, the PIGS (Portugal, Ireland, Greece, Spain) and many other European countries,

See the most recent public debt data for the Philippines below. I got this table from the Bureau of Treasury website, National Government Debt, March 2011. 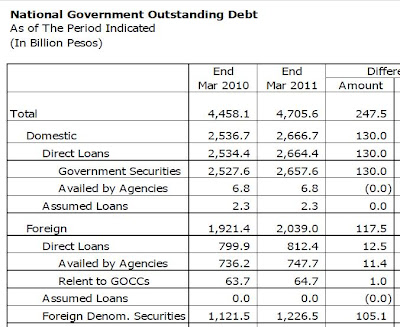 See that, P4.7 trillion of outstanding public debt as of March 2011, which was almost P248 billion larger than its year ago level. If we include contingent debt of another P525 billion as of the same period, that's more than P5 trillion of public debt. Or P500+ billion x 100.

I believe that by simply NOT borrowing more for whatever bleeding heart program, government simply living within its means, that act is already poverty-reducing. Why? See the next table, I constructed from a table in the DBM's Budget of Expenditures and Sources of Financing (BESF). 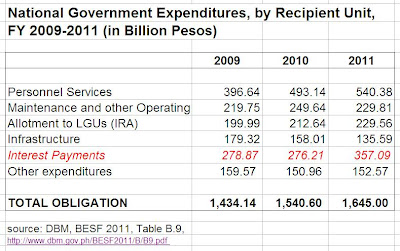 For this year, of the P1.645 trillion total obligation of the national government including transfers to local governments (internal revenue allotment or IRA), P357 billion or 21.7 percent will be for interest payment alone.

This means that ALL the other agencies (education, healthcare, agriculture, public works, justice, social welfare, police, local governments, military, etc.) will have to fight it out for the remaining P78 out of every P100 total budget.

So if the government can resist borrowing P300 billion (the average budget deficit per year recently), at say, 6 percent annual interest rate, we will spare ourselves of P18 B per year in interest payment alone. What to do with the P18 B savings? Government can spend for the poor, instead of borrowing more to spend for the poor. That's the estimated savings for not borrowing for just one year alone. If the government will stop borrowing for the next 10 years, meaning the entire government bureaucracies will learn to live within their means, then there will be lots of savings. And the FDC can self-destruct as there will be real freedom from debt as a result of freedom from borrowings policy.

The other side of this is poor tax collection (tax administration). 78-85% of professionals do not pay or pay poorly their tax obligations (that includes me), somehow, government has to bridge that gap by .... borrowing. Only QC has the will & the means to collect from professionals, even sari-sari stores are taxed through indexing.

I think the law on personal income tax is a joke. Who are the people who do not pay or underpay income tax?

It is important that government bureaucracies should learn to live within their means. If the people and taxpayers perceive them as lazy or inefficient or thieves, so that many people avoid paying taxes as much as possible, they must accept that. If total revenue collection is only P1.3 trillion, then spending should be only P1.3 trillion, not P1.6 trillion because government will borrow P300 B.

Of course I do not stop at "good governance". For me, a lean, small and limited government that is focused on promulgating the rule of law is good governance.
---------