After the President delivered his State of the Nation Address (SONA) 2011 yesterday, many people as expected, dissected and analyzed, positively and negatively, his speech. The basis of their analysis, of course, are their personal biases. A socialist and interventionist for instance, would naturally lambast his speech for not promising the public of more subsidies -- more education scholarship, more public hospitals, more condoms and pills for the poor, and so on. 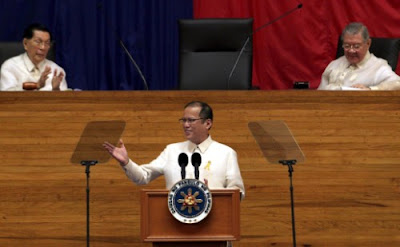 My analysis of the President's SONA is from a liberal philosophy perspective. Because the President won under the Liberal Party, not from the socialist-leaning parties like Bayan Muna, Anakpawis, Gabriela and Akbayan. Liberalism as a philosophy does not advocate more state subsidies of things that are better left as personal and parental or household responsibilities.

Here are among the important achievements and directions of the government as mentioned by the President yesterday.

1. No more wang-wang, sirens and display of political power over ordinary people.

2. Imprisonment for the corrupt, level playing field for people to improve their lives.

4. Discovery of excesses in the past: (a) used police helicopters purchased at brand new price; (b) PNCC officials who gave themselves huge bonuses and pay and brought the company to new debts; (c) costly dredging of Laguna Lake; (d) arbitrary food for school program; (e) PAGCOR, P 1 billion for coffee alone.

5. Tax evasion by many professionals, only 1.7 million self-employed have filed income tax returns.

6. More honest DPWH, dismissal of a district engineer who wanted to steal.

8. Housing subsidies for the police, military, jail personnel and firemen.

9. Better protection of Recto Bank in the Spratlys, purchase of Hamilton Class Cutter, a modern warship; also more helicopters, patrol crafts and armaments for the AFP. Bring the (Spratlys) conflict to the International Tribunal for the Law of the Sea.

13. Synchronizing the ARMM and national elections, discovery of 80 percent of disbursement were unliquidated. 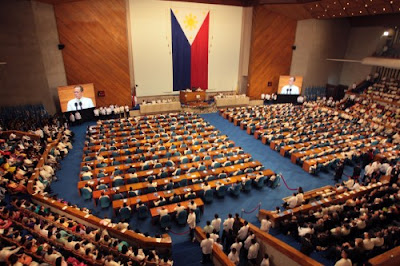 There are other achievements and directions of the administration mentioned by the President but I won’t mention them all here. For now, I will categorize the above list into (A) Liberal policies, (B) Interventionist/socialistic policies, and (C) Plain description of achievements.

A. Liberal Policies, Promulgation of the rule of law:

So for me, the President affirmed his being a liberal leader by promulgating the rule of law in four (4) statements and goals. They are generally self-explanatory, I will not elaborate on them anymore.

I will elaborate instead, why I think the six statements above are anti-liberal and more interventionist and socialistic.

7. Over-importation of rice, building more warehouses. Is rice trading a state responsibility? Isn’t it private and market function, along with tilapia and bangus trading, medicines and oil trading? Government should discontinue the wrong policy of being involved in rice importation and trading, even at a reduced volume.

8. Housing subsidies for the armed government personnel. The rule of law postulates that if you have to do or subsidize something, it should apply to all other sectors. If government must give housing subsidy to its employees, it should cover all employees, not just the armed personnel like soldiers and policemen. Is the President afraid of military and police coup d’etat?

9. Job matching programs is no government function. Companies and entrepreneurs sound out the kind of jobs they will be needing, students and job-seekers adjust to it, unless they intend to become entrepreneurs and employers themselves after their schooling.

12. More CCT. I have argued it in the past. The government has provided lots of programs and subsidies for the poor already: education (elementary to tertiary), healthcare (barangay health centers to specialized government hospitals to drug price control policy), housing, credit, irrigation, agrarian reform, public works, etc. for the poor. They should be failures somehow that poverty remains high, so government invented cash transfer for the poor. Sensing that it will be another failure, government is now readying condoms and pills for the poor, or population control of the poor. Endless state subsidies that encourage abdication of personal and household responsibilities.

15. More mass transport via monorail. Government should better limit its function at ensuring that contracts between and among private parties are respected and enforced. If a group of companies will put up an MRT or monorail from Quiapo to Fairview or Bulacan or Cavite and risk their own money, why should government restrict and over-regulate?

Liberalism limits the role of government to a few important functions that will enhance, not restrict, individual freedom. Promulgating the rule of law, of government own rules and contract between private individuals and entities. The rest, individuals as businessmen and employees, as producers and consumers, as buyers and sellers, they should be free to set their own production and pricing.

By mentioning or advocating the above six points, the President is veering away from liberalism and moving towards more interventionism, even socialism.
------