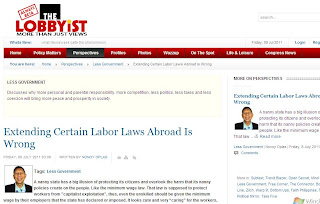 (This is my article yesterday in the lobbyist.biz with original title, Extending certain labor laws abroad is wrong)

A nanny state has a big illusion of protecting its citizens and overlook the harm that its nanny policies create on the people. Like the minimum wage law. That law is supposed to protect workers from "capitalist exploitation", thus, even the unskilled should be given the minimum wage by their employers that the state has declared or imposed. It looks cute and very “caring” for the workers, except that when that minimum wage level is high for many enterprises, plus many other costly labor regulations, businessmen hire as few workers as possible, and will not hire the unskilled, the young and little or no job experience yet. And this expands the level of unemployment in the economy.

Recently, the Saudi Arabia government stopped giving work visa for Filipinos trying to work as domestic helpers. This is after the Philippine government issued a new regulation that the minimum wage that Filipino helpers should get is $400, and that employers should provide family information and the layout of the residence where the domestic helper will be working.

The Philippine government is wrong here. Employment is a private contract between the employer and would-be employee. Government intervention in domestic labor market by setting a minimum wage law is already wrong, how much more extending such interventionist policy abroad, to cover foreign employers?

One, opportunity to travel abroad, to see a foreign country, its people, culture, main economic activities.

Two, opportunity to move to another work once they get there. For instance, some applicants as domestic helpers are actually teachers, nurses, other professionals. Once they get to their destination country, their employers or other friends might give them another job opportunity with a higher pay.

Three, opportunity to work in another country or employer that offers a higher pay for a similar job once they get some experience working abroad.

Four, to be reunited with other family members, relatives or friends who have stable job or settled already in destination country. There are many other personal or social reasons that the individuals have in mind.

What do they mean, that government should hire more employees and expand its already bloated bureaucracy? This will mean more taxes from the public as government spending will definitely jump.

Or they mean that the displaced workers can start their own business locally here? Many people who say this are not fully aware of how the national and local bureaucracies treat local entrepreneurs. See these photos below which I took from various small and medium establishments. 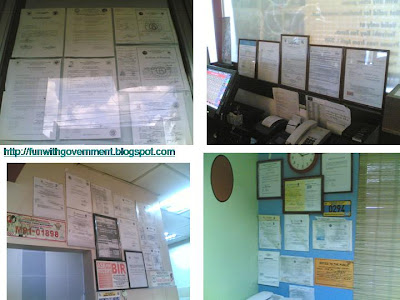 The number of business permits that micro, small and medium enterprises must secure even before they can start a business are plenty. Among them: barangay permit, location permit, health and sanitation permit, fire department permit, electrical permit, Mayor’s permit, etc. At the national government agencies level, entrepreneurs must also secure permits from the BIR, DTI or SEC, SSS, other agencies depending on their line of business (eg, get NFA permit if selling rice, get DOH and FDA permit if selling medicines, etc.) Then there are mandatory membership in other government agencies like PhilHealth and Pag-IBIG. 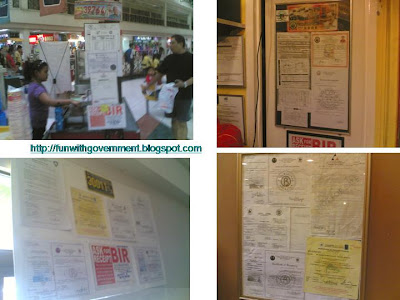 It is not only the cost and fees of those multiple permits, people have to spend money and time to go to those offices, wait several days or weeks before they can finally start a business.

So if the government is not friendly to local entrepreneurs, limiting their potential employment generation capacity, why should government intervene again to regulate foreign employers who intend to hire Filipino workers who cannot be absorbed by the local labor market?

Last year, the Hong Kong government also protested a Philippine government regulation requiring HK employers of Filipino domestic helpers to get various insurance for their helpers costing US$144 for two years. The HK government already requires its citizens to get local insurance for their foreign workers. The Philippine regulation therefore, was an additional imposition, additional cost, to foreign employers. This made many HK households to get Indonesian, Malaysian, or mainland Chinese helpers even if they wish to get Filipino helpers. See my discussion about that case here, Restrictions to OFWs.

I suspect that a local mafia are working with the POEA or DOLE to make otherwise simple procedures become more complicated. These are the guys who sell insurance, in the HK case, and recruitment agencies who charge even higher “placement fee” from aspiring OFWs as the latter are supposed to receive higher salaries abroad because of those new Philippine government regulations, in the Saudi Arabia case. Now they have seen how their treachery would backfire. But the bigger loser are aspiring OFWs who want to work abroad.

Government should learn to step back as most if not all of its interventions have adverse consequences to the people.
-----------