Dr. Roy Spencer, a climatologist at the University of Alabama in Huntsville (UAH), former NASA scientist, and book author, is among the high profile climate scientists who question the man-made warming fiction. And he correctly links the heavy politics of the UN and its member-governments who want more environmental regulations and energy taxation, with IPCC reports. See my earlier article, Dr. Roy Spencer on IPCC defunding, February 21, 2011.

Now the man has produced a new book, not about climate but about free market. Wow! 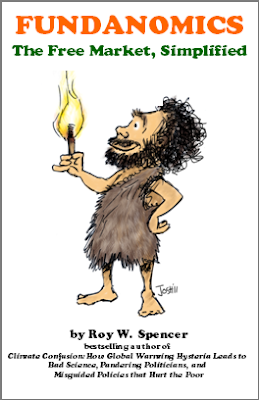 From Fundanomics.org: FUNDANOMICS is the simplest and most concise exposition you will find of what energizes the Free Market, and why it should be celebrated by all social classes.

Best-selling author Roy W. Spencer looks at the fundamental driving force that propels a society to ever higher levels of prosperity, generation after generation: People having the freedom to provide as much stuff as possible to each other that is needed and wanted...no matter what that stuff happens to be. Everything else in economics is details.

In his blog post about his book, Dr. Spencer wrote,

When we allow politicians and opportunistic economists to fool us into supporting a variety of technical and murky government “fixes” for the economy, we lose sight of the fundamental motivating force which must be preserved for prosperity to exist: Liberty and the pursuit of happiness.

The main role of the government in the economy is help ensure people play fair…and then get out of the way.

Amen. Just promulgate the rule of law, that's the single most important role of government. All other functions are either secondary or unnecessary. Like "fighting global warming", a totally useless but very expensive program by so many governments. 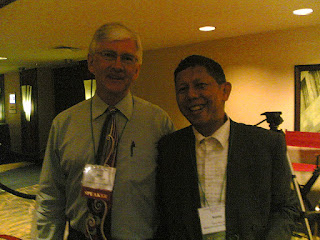 I am reposting my picture with him. This was during the 4th ICCC, also sponsored by the Heartland Institute, in Chicago last May 2010. I've been a fan of Dr. Spencer since a year before that, so when I finally met him at the conference, I obliged him to have a photo with me :-)

Almost the entire blogosphere is a product of free market. Google, blogger, facebook, twitter, yahoo, wordpress, hotmail, linkedin, etc. were developed by private entrepreneurs as a response to human wants, human need, for fast and cheap communication and social networking with other people around the world.

Free market after all, simply means free individuals. All markets are made of individuals -- consumers and producers, buyers and sellers, young and old, male and female, rich and poor. When we free up markets away from the interventionist hands of many politicians, bureaucrats and statist economists, especially those who work in the multilateral and foreign aid institutions (UN, WB, IMF, ADB, USAID, etc.), human creativity, entrepreneurship and innovation will naturally flourish.

There will be lazy and irresponsible guys of course, they are everywhere. The good thing in free market is that these guys will become very poor, if not starve. There will be no heavy entitlement programs that will subsidize and feed them and bail them out from poverty.
Posted by Bienvenido Oplas Jr at 10:59 AM

Is there Philippine distributor for the Fundanomics? I have searched local bookstores, both online and personal visit but could not find any. I guess you may help me find one. Thank you so much!

Hi Marlon, the book was released only last July 4 in the US. I don't think it will be made available in the Philippines soon (if ever). So you will have to order it online in the US, visit fundanomics.org. Problem is that shipment cost may be high, then the Bureau of Customs might slap a VAT. Regards.