I'm following PAGASA, the Philippine government's weather bureau, on twitter. This morning, I was commenting to their tweets: 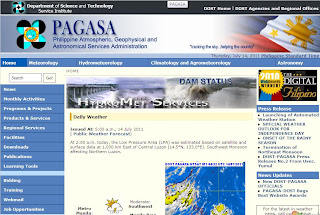 dost_pagasa PAGASA-DOST
we use local names if the tropical cyclone is inside the Philippine Area of Responsibility (PAR).

Noysky Nonoy Oplas
@dost_pagasa What's the reason for having 2 names, int'l & local, for storms or cyclones that enter PAR? Why not just adopt the intl name?

dost_pagasa PAGASA-DOST
Ma-On is still outside of the Philippine Area of Responsibilty (PAR). if this typhoon enters the PAR on Sunday, we call it "Hanna"

Noysky Nonoy Oplas
@dost_pagasa Lesson: keep asking PAGASA why they give 2nd name to cyclones that enter PAR, they wont answer. They give u d local name. cool.

Noysky Nonoy Oplas
@dost_pagasa Next question to PAGASA: Why are past temp data, say past week, months or yrs not available in your website? You sell the data?

dost_pagasa PAGASA-DOST
Typhoon "Ma-On" is still far away from the country and around 2400 km east of Extreme Northern Luzon.

Just like many govequrnment bureaucracies, if they do not like your questions, you get zero response from them. Tney just want your tax money perhaps. Now, if we want some data that they are paid by our tax money to generate, they say, "Sorry, data not freely available. You pay per sector, per year."

Yesterday, it rained here in Manila and surrounding areas. It has been cloudy since last month and, well, since the past few months even after the regular rainy season is supposed to have ended last October or November. I like it when it rains these months. April-May are the hottest months of the year, so if we have cloudy sky almost everyday, and even rains in April, it's cool. 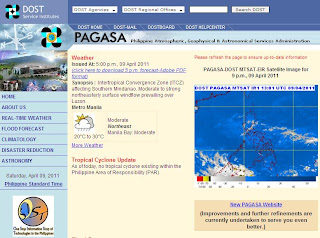 I wanted to know what's the average monthly temperature for some Philippines cities like Manila. The government agency that has the mandate to keep and give such data is PAGASA. If you go to their website, this is what they will give you.

But such data are available in other websites for free, and those websites do not get a single centavo from us Philippine taxpayers. PAGASA gets several hundred million pesos per year of taxpayers' money. 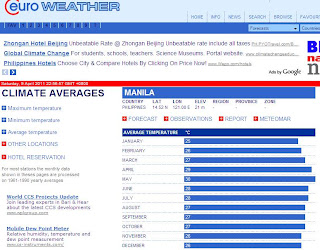 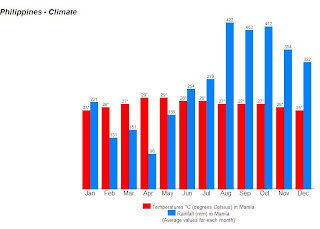 And this one's from Students of the world. It shows the average monthly temperatures (in red) and rainfall (in blue) in Manila. The basic source of data is not shown though. 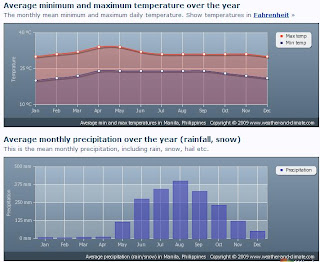 This one is from World Weather and Climate Information. The charts are easy to read, showing the maximum and minimum temperatures per month in Manila, also the average monthly precipitation. 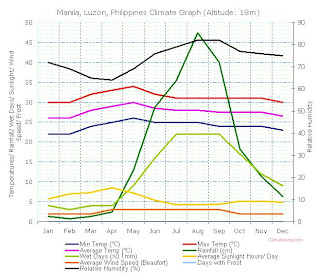 This one may look complicated, but it shows all the important monthly data -- maximum, minimum, average temperatures, rainfall, wind speed, and so on. Cool!

It's from the Climatetemp info.

Data is from the Weather Channel.

PAGASA is getting money from the public twice -- from the regular annual budgetary appropriations, and for each data given and sold to the public. Other government agencies and offices of course, get those data for free.

PAGASA is also part of the anthropogenic global warming (AGW) camp. The past century's warming was "man-made." Natural climate cycles are also called "man-made climate change". It is easy to peddle these fictions and imaginary stories if one does not show objective climate data of warming-cooling-warming-cooling cycles in the past.

In the case of PAGASA, it does not even give data of average temperature range for the past few months and years. One has to write to them to request for the info, go to their office in Quezon City to pay a fee, then wait for several days before they send you the data. It is bureaucratic, it is costly, it is time-consuming. Simply inefficient.
-------