(This is my article yesterday in thelobbyist.biz with original title, Fiscal irresponsibility and debt default)

The term “debt default” suddenly has become a common term in public discourse in the US. The biggest economy in the world, the strongest military power in the world, and among the beacons of the “rule of law” in the world, is entertaining the idea of violating the rule of law, by defaulting on its huge public debt payment. What happened?

It is actually common sense and will not take a degree in astrophysics or financial economics to understand that living beyond one’s means will bring someone to big trouble someday. By spending larger than one’s income or revenue, regularly and consistently, then one’s debt will simply pile up year after year. And that is what has happened to the US and so many other countries in the world now, rich and poor alike.

I will limit my words and show these charts and a table below to speak for themselves. These will help readers make their own conclusions too.

The US’ budget deficit (expenditures larger than revenues) from 2010 to 2012 is projected to average around 9 percent of GDP. This is a very high figure. The ballpark “sustainable” level is 3 percent of GDP or lower. I discussed this chart earlier in ATR and the soul of limited government.

Fiscal irresponsibility, of public spending larger than taxes and other revenues, has been around since the 70s or earlier. There was a short period of fiscal surplus in the last decade (mainly during Pres. Bill Clinton’s term) but were erased immediately. Source of this chart and below is The Economist, I just forgot to note the issue date.

While the US war in Afghanistan, Iraq and elsewhere, then the huge corporate bail-outs in 2009-2010 have contributed a large part for the big jump in public spending in recent years, it will be the expensive welfare and entitlement programs plus high interest payment that will tear down the American taxpayers’ and government’s pockets in the coming years and decades. 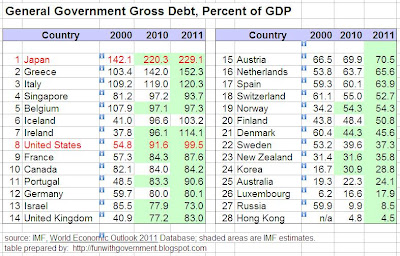 Recently, it was Ireland and Greece that experienced deep fiscal crisis. Soon, Portugal, Spain, Italy, UK and other European countries, and the US, will follow suit. Note the 14 countries above which have gross debt of 77 percent of GDP or higher in 2010.

The US, or any other highly indebted economies around the world, should NOT default on their debt payment. The current high debt payment is penalty for past wastes and excesses. It should be a painful reminder that fiscal irresponsibility is wrong.

What the US and other highly indebted countries should DO, is to cut spending, from the size of their bureaucracy to military spending to expensive entitlements to foreign aid. If revenues are not sufficient to cover whatever bleeding heart programs, then that’s it. Governments should learn to live within their means.
-------

Five years ago, I wrote this:

How Bloated is the US Government?

Lucky that I checked the Mackinac website, and I saw Mr. Mark Brandly's article, "How big is Bush' big government?". For brevity purposes, I removed certain paragraphs; if interested to see the whole paper, please see http://www.mackinac.org/article.aspx?ID=7689

Below are the relevant numbers from Mr. Brandly's paper:

* Federal spending alone in fiscal year 2006 is expected to be over $2.7 trillion, which means the federal government spends $7.4 billion a day or $5.1 million in every minute of the year. This is 815 times the level of federal spending in 1930.

* This $2.7 trillion in federal spending breaks down to $9,000 per capita or more than $36,000 for the average family of four. If we add in all state and local spending, then total government depredations (a term Murray Rothbard used to describe the greater of government spending and government receipts) are currently over $4.4 trillion or about $14,700 per person annually.
* A significant portion of this spending is being financed with government borrowing. In 1930, the per capita debt load was $140 per person. The current federal total debt level is $8.4 trillion, which works out to around $28,000 per person. In short, the per capita debt load is 200 times larger than it was in 1930. Adjusting for inflation, the real debt per capita is still over 16 times more than it was in 1930.

* Federal government debt increased $553 billion in fiscal year 2005 alone. That's more than $1.5 billion of additional debt per day and over $1 million of borrowing per minute for every minute of the year. The interest on the debt in 2005 was $352 billion or more than $1,100 for every man, woman and child in the country. These interest payments are roughly equal to 37 percent of federal income tax revenues.

* Much of this debt is owed to the Federal Reserve. U.S. taxpayers are on the hook for $758 billion of government securities that are held by the Fed. So, on average, every person in the country owes the Fed about $2,500.

* One way to see the harm of government intervention is to realize its effects on our standard of living. The depredations of the state reduce the incentives to be productive, destroy our capital base and have a negative effect on economic growth. From 1959 to 2005, adjusting the numbers using the implicit price deflator, real Gross Domestic Product increased an average of 3.37 percent annually.

* Consider the possibility that government interventions reduced real economic growth 1 percent annually during this time. If there had been an additional 1 percent per year economic growth since 1959, then real GDP would currently be 55 percent higher than it is. The 2005 GDP of $12.5 billion would have been $19.3 billion. The median family income is estimated to be $44,389. A proportionate increase in this statistic results in a median income of $68,800.

* It is conceivable that the $4.4 trillion of annual depredations could have caused more than 1 percent annual damage to our economic growth since 1959. What are the implications of a 2 percent negative impact on GDP? If the absence of interventions had added an additional 2 percent annual growth, this would have resulted in 141 percent more output today. The 2005 GDP would have been over $30 trillion and the median family income would now be $107,000. The worker described above with the $44,389 gross salary and the $28,850 of after tax pay, would have an income of $107,000. The depredations have reduced his net income by 73 percent.

* Those of us making the case for liberty have logic, history and morality on our side. Government intervention is immoral and should be stopped for that reason alone. However, the economic costs of the intervention are also important. Part of the appeal of freedom is that it leads to tremendously higher standards of living and these numbers show that government interventions that cause seemingly small amounts of harm, over time, impoverish a society.
-------