Where there is political and economic coercion by governments, there is also product and service non-availability or withrawal by the affected players and companies. The stronger the coercion, the plentier the amount of goods and services that are non-available in the market.

A clear example are the highly-repressive governments of North Korea, Myanmar, Venezuela, Congo and many other African countries. Private companies, especially multinationals, would hardly consider setting up businesses in those countries as the political threat of price control, product confiscation, raids and other forms of harassment are very clear and real. Contrast that with free trade economies like Hong Kong (unilateral free trade policy actually), where almost anything and everything is available from so many countries and territories. 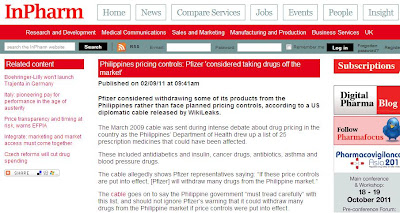 While searching google on "drug pricing", I saw this article from InPharm, Philippines pricing controls: Pfizer 'considered taking drugs off the market', dated September 2, 2011. It said,

Pfizer considered withdrawing some of its products from the Philippines rather than face planned pricing controls, according to a US diplomatic cable released by WikiLeaks.

The March 2009 cable was sent during intense debate about drug pricing in the country as the Philippines’ Department of Health drew up a list of 25 prescription medicines that could have been affected....

The article referred to a Wikileaks cable, PHILIPPINES CLOSER TO DRUG PRICE CONTROLS, so I visited the site. 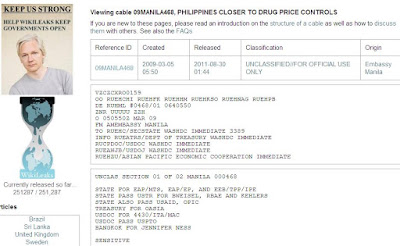 It's about the supposed cable of then US Ambassador to the Philippines, Kristie Kenney (I follow her on twitter, and just 3 days ago, she mentioned me and replied to my tweet on the subject of Rule of Law :-)) to the US Secretary of State, dated March 5, 2009. The cable said,

1. Summary. The Philippine Department of Health has listed 34 prescription medications that will be subjected to price controls under the Cheaper Medicines Act (reftel) enacted last year. The main impetus for the rapid imposition of price controls came from advocacy groups and non-governmental organizations. Local representatives of international drug companies participated in consultations on maximum retail prices, but warn that some of the controlled prices are lower than the costs of making the drugs, which could force them to withdraw many drugs from the Philippine market. End summary...

4. We met with several directors of the Pharmaceutical and Health Association of the Philippines, the trade association of foreign drug companies, who noted that the main impetus for the rapid imposition of price controls came from advocacy groups and non-governmental organizations. While the Association acknowledged that it has been invited to consult with the Health Department, it also noted that some member companies had not participated. The Association is also concerned that the final list of drugs subject to price control may contain more than 25 medications.

5. In addition, the Association asserts that the Health Department has been pressuring companies to sell drugs in small packages that can retail for 100 pesos, or around USD 2, offering to
exempt such drugs from price controls. In many cases, this can amount to a handful of tablets needed for one cycle of a course of doses. Representatives of Pfizer warned us that for certain
antibiotics, small doses can promote antibiotic-resistant bacteria, and claimed that it is being pressed to sell antibiotics that currently cost over 1000 pesos for the 100-peso fixed price. Pfizer said that if these price controls are put into effect, it will withdraw many drugs from the Philippine market.

6. The Philippine press has recently featured stories noting that drug prices have not fallen since the Cheaper Medicines Act came into effect, creating pressure for more immediate action from the government. However, the Philippine government must tread carefully and should not ignore Pfizer's warning that it could withdraw many drugs from the Philippine market if price controls are put into effect. Pfizer's withdrawal of medicines from Thailand following laws on compulsory licensing clearly demonstrates the risks. Post will continue to remind Health Department officials that expecting pharmaceutical companies to sell products for less than it costs to produce them could prove counterproductive.

Wow. I have read other Wikileaks cable release supposedly also from then US Ambassador Kenney about her opinion about now PNoy Aquino when the latter was still a Senator. There were questions about the validity and authenticity of those "cable leaks." So I will also not take the above cable leak as 100 percent true.

But assuming for the same of argument, that the above communication was indeed true, I will not be surprised of the wording of the former Ambassador. Pfizer as (or any other) US-based company that pays plenty of taxes to the US government, would naturally seek the assistance of its own government to talk to the host (Philippine) government when the policy of the latter will adversely affect its business. The same way that some Philippine-based company/ies sought the assistance of Philippine Congress and the Executive branch in crafting the Cheaper Medicines Law (RA 9502) and amended the Intellectual Property Code so that certain patent protection of innovator drugs by some multinational pharma companies can possibly be tweaked and dishonored via provisions on compulsory licensing, special CL, early working, exhaustion of rights and government use. 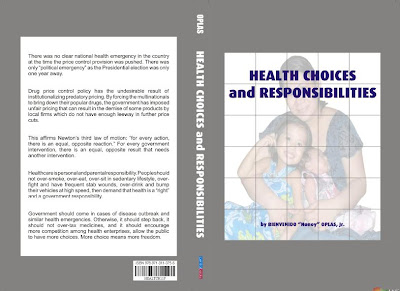 I started attending only on its 4th meeting in early June 2009. I have a long discussion of what transpired in the 4th and 5th meetings of the Council on June 2009, see my book, Health Choices and Responsibilities (published January 2011, 233 pages) and turn to pages 2-7, also pages 72-73.

Anyway, these issues are now water under the bridge. Pfizer did not withraw its innovator drugs that were hit by price control (Norvasc (amlodipine), Lipitor (atorvastatin) and Azithromycin (anti-biotic), what else) and opted to absorb the losses and resorted to deep cost-cutting measures including laying off a few hundred employees.

But what will not go away is the damage done by government intervention -- particularly the Philippine Senate, the Committee then headed by former Sen. Mar Roxas, the DOH then headed by former Sec. Francisco Duque, and the former President Gloria Macapagal Arroyo -- in drug pricing. As I wrote here in the past, price control is price dictatorship.

This damage to the business environment, at least in the health sector as far as foreign investment is concerned, is long-term. And the fact that the price control policy is still not lifted until now even if all the 3 main political personalities involved are no longer in their offices, makes the damage last longer.
-------