I attended the 2nd Generics Summit organized by the Department of Health (DOH) and one of DOH's big office, NCPAM. It was held the past two days, September 7-8, at the Richmonde Hotel in Eastwood, Libis, Quezon City. 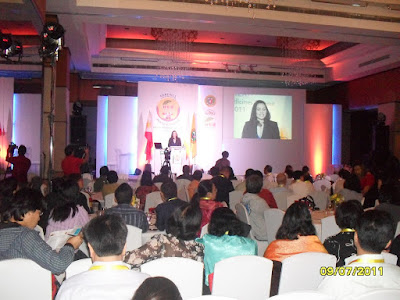 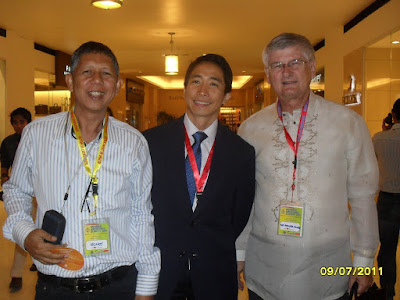 Then a generics expo exhibit was formally opened late morning that day, at the 2nd floor of the Eastwood Mall. I had the chance to have a photo here with Beau Agana, President of the Philippine Chamber of Pharmaceutical Industry (PCPI) and CEO of Pharex Pharma, and Reiner Gloor, President of the Pharmaceutical and Healthcare Association of the Philippines (PHAP). PCPI is composed of mostly if not entirely Filipino companies (manufacturers, drugstores, more than 120 member-companies) while PHAP is composed of mostly multinational and innovator pharma manufacturers, also some local drugstores).

Afternoon session was packed with many discussions and some debates. First session was on Improved Healthcare Access and the four speakers were:
1. Oscar Picazo of PIDS who spoke about access to cheaper medicines via the Botika ng Barangay (BnB), Botika ng Bayan (BNB), DOH treatment pack and other programs.
2. Ruth Natividad of IMS Health who spoke on impact of the Cheaper Medicines Law with their survey of both physicians and patients, their knowledge of the drug price control policy and related provisions,
3. Romeo "Al" Castro also of IMS Health who spoke on the overall generics picture in the country, and
4. Catherina Timmermans, Technical Director of WHO, spoke on the global picture of generics. 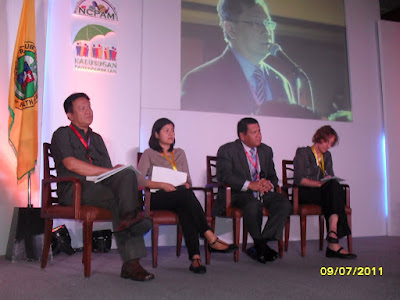 (From left: Picazo, Natividad, Castro and Timmermans) Here's one twist. I went to the Summit as an ordinary participant, not a speaker nor a reactor. While the last speaker, Ms. Timmermans, was delivering her talk, I was asked by a friend at the DOH if I can be one of the reactors as two scheduled reactors from the consumers and civil society were not around.

Perhaps being used to spontaneous writing and thinking as a blogger, I said YES, even if I have just about 10 minutes to compose my thoughts, write comments and draft questions, to the four speakers. Tough job eh.

In those roughly 10 minutes (or less) from the time I was informed to be an instant reactor to the time I went to the reactors' table, this is what I said.

I speak here as a consumer and as a taxpayer. As consumers, our interest is simple: more choices, more options, from more competition among more players, from innovator and generic manufacturers, from more drugstores. Getting subsidies is not much a major concern.

Thus, government policies that inhibit if not kill competition among players, like the drug price control policy, is wrong and against our interest.

As taxpayers, it is unfair for us if we pay plenty of taxes so that government will have more money to subsidize those who over-drink, over-smoke, over-eat, over-sit, over-fight, over-sex, and when they have frequent stab wounds, have AIDS, have fat bodies, etc. they run to government to demand that "health is a right."

Now to my questions.

For Mr. Picazo of PIDS, you know the bad fiscal situation of the government, the high annual budget deficit, the high public debt burden and the high interest payment to pay for those public debt. Consider for instance, interest payment alone, principal amortization not included yet, of the national government: P294 B in 2010, P357 B this year, and P333 B in 2012. Would you recommend that government should limit, if not get out of the Botika ng Barangay (BnB) since many of them are not performing well financially, in order not to further bloat the spending and the public debt? There are many private generic drugstores now that are entering more and more small municipalities and even poor barangays, like The Generics Pharmacy, independent and non-chain drugstores.

For Ms. Natividad and Al Castro, since IMS data show that the current drug price control policy did not achieve its main goal, and IMS data are for subscribers only and its rather expensive to get subscription, would you be wiling to show your data to Congress, especially on the deliberation of Cong. Biron's bill to expand the price control and an idiotic and wrong policy of creating a new government bureaucracy called the Drug Price Regulations Board?

For the WHO, while promoting generic drugs which is a good policy, but aren't you spearheading some anti-innovation and IPR-busting policies like compulsory licensing, early working, parallel importation?

Their reply were, as far as I can remember them, as follows:

1. Picazo: Yes, the fiscal burden is big, so I recommend that for those BnBs that are going under, they should be allowed to close and not be subsidized further.

2. Castro: Yes, we are willing to show our data if it will help promote good public health. Provided also that we will not be cited for contempt or be harassed.

3. Timmermans: No, we are not advocating IPR-busting policies, it's just that some policies to enable governments to deal with health emergencies should be on hand. 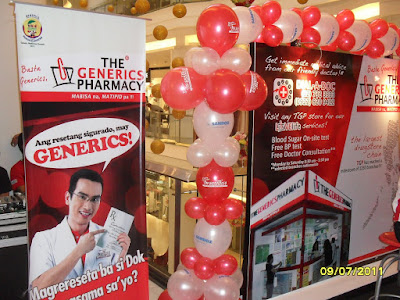 After the panel speakers and reactors went to their seats, I was approached by some friends and other participants in the audience, saying that they liked my reaction, yeah! One of those who approached me was the President of The Generics Pharmacy. I think people appreciate it when I emphasize the personal responsibility aspect of healthcare, it's not all about government responsibility, or pharma manufacturers and drugstores responsibility.

The next panel that afternoon was on Private Sector Efforts in Improving Access to Generic Medicines. The speakers were the respective heads of Reiner of PHAP, Beau of PCPI, and the Philippine Medical Association (PMA), Dr. Oscar Tinio. 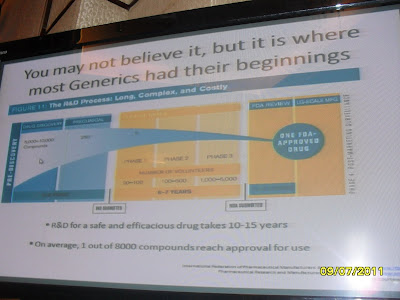 This is one slide shown by Reiner. I think this will help people realize the role of drug innovation, that without innovator drugs, there will be no generic drugs. Or without innovator companies, there will be no generic companies. Thus, continued efforts, explicit or implicit, to bust the patent and IPR system, will have both short- and long-term negative impact on drug innovation. 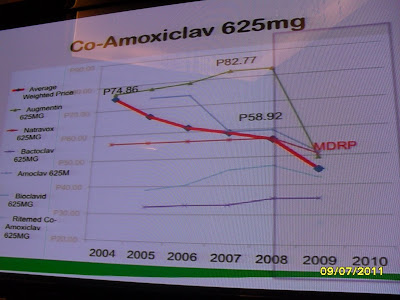 And here is one of the many slides that Beau showed, showing an important point that even prior to the drug price control policy of the government, the average price of drugs for co-amoxiclav molecule (anti-biotics, anti-infection), simvastatin (anti-high cholesterol), amlodipine, and other important molecules, have been going down. 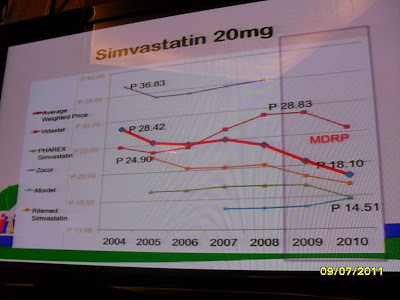 What the drug price control policy has done is to force, to coerce, further price reduction of the innovator drugs, but several generic drugs were also eased out of the market as they have little leeway for major price reduction. Beau said he will send me his presentation, so I can write more about the subject.

The next panel was on the Retail Landscape and Intellectual Property Landscape. The speakers were Janet Estranero of The Generics Pharmacy, Epifanio Evasco of the Bureau of Patents, Intellectual Property Office (IPO), and Catherina Timmermans of WHO. I would have wanted to be a reactor in this panel as IPR and medicines is among my favorite topics. But the reactors that afternoon were also great minds, like FDA Director Suzette Lazo, from the Philippine Pharmacists Association (PPhA), others. 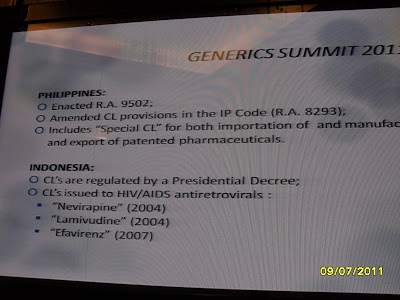 . Mr. Evasco showed this among his many slides. He said that while compulsory licensing (CL) is clearly in the Cheaper Medicines Law, they have not accepted any CL application yet from any of the local pharma companies. They received one CL application in 1998, and there was no successor application then.

I think this is good. All the big and blockbuster drugs like amlodipine, clopidogrel and atorvastatine already lost their patents. There are now plenty of branded generic drugs on these molecules sold at much lower price than the innovator brands, so consumers and patients have more choices now. There are a few remaining patented drugs in the Philippine market but these are not blockbuster drugs, like anti _____ cancer. Any CL applicant will spend huge money anyway in legal battles, so why spend big on lawyers and PR guys when you can spend your money developing and marketing new and more branded generics of the blockbuster off-patent drugs. Or wait for those patents to expire in a few years and spend your savings and resources developing new generic drugs. 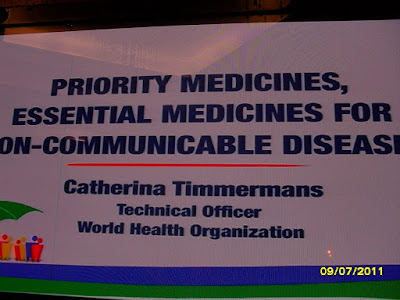 The WHO recently is going almost full throttle on the campaign to control non-communic-able diseases (NCDs) or lifestyle-related diseases. The infectious diseases are now generally under control except for some disease outbreaks like SARS and H1N1.

My position on the matter is simple: If people will over-drink (have liver cancer, intestinal disorder, etc.), over-smoke (have lung cancer, throat cancer, etc.), over-eat and over-sit (have hypertension, high cholesterol, diabetes, etc.), is it other taxpayers' problem via governments and the WHO? Self-inflicted diseases should be addressed by self-financed healthcare, with assistance from friends, family, private and charity foundations. Government assistance and subsidy may be expected -- no one can stop now those politicians and legislators if they will coerce getting more of our money via more and high taxes to spend on things that whet their political appetites -- but this should be limited.

More stories and pictures later.
Posted by Bienvenido Oplas Jr at 7:03 AM

You're welcome, Beau. I'm a friend of the generics guys, also of the innovator guys. As I said repeatedly, as a consumer and future patient -- now I'm on a zero or boycott medicines lifestyle :-) -- I, we, simply need more competition from more players and more manufacturers. Cheers.