IPR and Medicines 17: Why are Drugs Still Expensive After Patents have Expired?

This is the question posed by a friend, Mhyanne, in her facebook wall. It's a question that has both valid and invalid presupposition because some off-patent drugs are really cheap (say, paracetamol that sells for only P2 or less per tablet) while some are still expensive. But before I discuss further, here are some comments and explanations to the question, "Why are drugs still expensive even after patents have expired?", from her other friends in fb.


1. Because government is corrupt. Companies, especially international, cannot just lower their prices because they have to pay some of our government officials before their products are allowed to enter (especially thru bidding) our market.

2. Because profit from patented drugs are to pay for the cost of research and drug development of drugs until marketing. after the patent expires, thats the start pa lang they get profit from it. Also depends if multinational drug companies are willing to produce the same generic to make the cost competitive.

4. It's not the post-marketing research that is expensive. The whole research from pre-clinical until post marketing. But if drug companies will not research new drugs, lots of people could be dying now. I think there is no money in drug business. Money is on electronics and computers. There are only a few who would invest on drugs coz the turn-over of money takes years. One drug research would take maximum 20 years. some don't even get patented and trash.

5. Wrong idea about the conventions abroad. Research people and doctors don't go abroad only for pleasure, most of us dont even sleep at night coz we respond to many emails. Research is usually global, so people meet in one country only, share notes and study, learn together about the drug, methodology and the treatments.

You cant blame also the multinational drug companies. Some doctors if you don't splurge money on them during postmarketing, they will not move. Even if the new drug is great.

My friend added her own observations and ideas:


Government will be looking into the issue of unethical promotion of the pharma companies. Yes there are cheaper meds but a regular employee earning 350 salary per day still wont be able to complete the full course of ceftriaxone vials if patient has pneumonia, it will be great if insurance system would cover even take home meds, pharmaceuticals must also look into their pricing schemes like for developing countries like the PH sana it'll be lower.

Centralized procurement can lower prices, less people to transact with. Companies who spend so much in research for new drugs are useful too, specially now that resistance to certain antimicrobials is rapidly increasing... 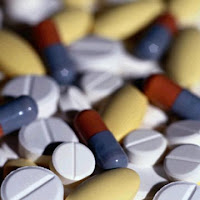 My own suggestions are:

2. Remove mandatory discounts (50 percent under drug price control for the 21 molecules + 20 percent for senior citizens and persons with disabilities, PWDs). Drug manufacturers and drugstores have to jack up the price of other drugs not covered by these to compensate for revenue losses. This will also require a new law, amending or abrogating the previous laws on those mandatory discounts. Not all senior citizens are poor; in fact, many of them are wealthy, getting good pension from their previous employers or from their well-off children or relatives. Thus, assuming that all senior citizens are poor that need subsidy -- not from the government but from private enterprises like drugstores, restaurants, airlines, shipping lines, etc. -- is wrong.

In the case of the existing drug price control policy, I have argued in several papers here, that the DOH should withraw that policy. See my latest paper for instance, Drug Price Control 21: Illegalities in the Implementation of the Policy, November 14, 2011.

3. Encourage the entry of more generic manufacturers, both foreign and domestic, and more innovator companies from the developed world. Competition among players is the best regulator of prices and product quality, not more government regulations and taxation.
-------

On a slightly different thread, my friend from Malaysia, Tricia Yeoh, posted this in her facebook wall: "A heated discussion continues today, this time on intellectual property rights, and the needs (or not) for such rights."

A number of Tricia's friends commented, I joined the fray. My debate with Yin below actually extended to climate alarmism, but I will not include that thread here, limit the exchanges only on IPR.

Leon: IP is needed - but people are overdoing it. IP should not protect ideas which will eventually emerge given time, but really original constructs.

Kia: Trish, ask them about the impact of IPR and FTAs on access to affordable medicines for the poor and those who need it.

Leon: your opening a can of worms. Do remember it cost USD1Billion to develop a block buster drug - IP is a good way to recover a profit and make it worth while. I have a solution though for the next gen of block buster drugs, but its an indirect approach.

Kia:  I have no problem with firms making their investments worthwhile...js don't stop generics from producing and no 'data exclusivity' conditions forcing generic producers to incur costs which are really unnecessary, given the test findings that are already there.

Kelvin: That IP must be protected is a given. The actual discussion should center around where these protections cease to be useful and begin being detrimental to continued innovation. IF a drug company can't patent chemical compound, then they have no incentive to develop one. But if they can rest on their laurels indefinitely (patents last forever) then why develop a new compound if the current one works? Also, at what point does the protection of IP becomes an issue of ethics? Beware strawmen arguments, "We should shorten the period in which IP is applicable", "Research shows that the lack of IP would cease big budget innovation bla bla bla." - the argument is for shortening the period of applicable IP laws, not getting rid of them. Anyone who thinks that IP is purely detrimental and that all information should be free is an idiot. And anyone who thinks that the same IP laws should apply across all fields is a fool. Different industries have different rates of innovation and evolution. IP laws should reflect this accordingly. To hell with sweeping generalisations, we are not children and this is not a simple world. We need a nuanced approach, but a principled one.


Yin: Are you implying that TWN's active opposition to a legal institution invalidates them from questioning the merits of that institution? Your implication appears to be that you shouldn't talk about IPR unless you are an advocate. That seems a rather authoritarian and anti-intellectual stance for someone who appears to support freedom and personal responsibility.

Nonoy: The linked TWN papers are lousy. Thousands of people are dying from dengue alone each year, and there are plenty (tens of thousands) of anti-biotic resistant bacteria that sprout each year, there are dozens and dozens of different types of cancer -- ALL with no existing drugs or vaccines yet. Demonizing drug innovation for political reasons is wrong.

An IPR like patent or trademark is a mini-monopoly, true. Amlodipine molecule (against hypertension) as discovered by Pfizer for instance many years ago, was a product monopoly for a limited period of time. But other companies also invented their own drug molecules against hypertension and called them by a different name. So no one really has a monopoly on a drug against hypertension as there are many molecules, mostly off patent, against the diseases. Demonizing patent and IPR for political reasons is wrong.

Yin: You are muddling categories (or shifting goalposts) with the IPR argument. The TWN paper is focused on the particular case of HIV retrovirals where large numbers of victims exist amidst superlative company profits which serve to restrict access to health and containment of the disease.

The other examples of health crisis you offer are based on different diseases which may or may not merit compulsory licensing, depending on whether pricing of a cure constitutes a major barrier to access for many poor victims. Even in your linked article you never address this humanitarian concern at all. So, don't shift the goalposts, address the humanitarian problem of HIV and retroviral access head on; or should victims do up their bootstraps, get a good job, earn more money and pay drug companies their 'fair due' for the drugs?

I have read a number of activists attacking IPR because formulas in algebra, calculus, chemistry or dance steps should not be patented. I wondered where they get that idiotic idea that such formulas and dance steps are patentable? Perhaps from plain paranoia.
-----