IPR and Medicines 16: Wikileaks and the Cheaper Medicines Law

In a news report today in the Philippine Star, author Sheila Crisostomo wrote,

MANILA, Philippines - The online whistle-blower WikiLeaks reported that the United States had lobbied against the Cheaper Medicine Act in the Philippines after American stakeholders expressed concern about the possible changes in the country’s pharmaceutical policies.

A press statement revealed that on Oct. 27, 2005 then US Ambassador Kristie Kenny said that US Intellectual Property (IP) Rights holders “were concerned about Roxas’ move to amend the IP Code with respect to patents and parallel imports for pharmaceuticals.”

Kenny supposedly said that Roxas’ bill was “troubling US pharmaceutical rights holders trying to retain their market share and profitability in the Philippines.”

“Roxas’ proposal would change the IP Code so that the period of patent protection begins after the product has been introduced anywhere in the world rather than just in the Philippines,” the statement quoted Kenny sa saying....

Ms. Crisostomo did not cite her source/s but it should have come from the various wikileaks and cablegate, gathered by James Love of the Knowledge Ecology International,


http://keionline.org/node/1225
Wikileaks cables on the US opposition to Philippines legislation on affordable medicines

From September 19, 2005 to January 15, 2010, the US Department of State sent dozens of cables from Manila reporting on disputes in the Philippines regarding IPR and the pricing of pharmaceutical drugs. Much of the U.S. advocacy in the Philippines was done in close cooperation with Pfizer.

One disturbing feature of the cables is the constant lying about the IPR norms in the TRIPS agreement. For example, the Department of State often claims that TRIPS requires patents on new uses of old drugs or data exclusivity (it clearly does not). The US Department of State also implies in several cables that parallel trade (importing the patent owners' own product that was placed in the market in another country), is inconsistent with TRIPS....

The other reference to Ms. Crisostomo's article, especially her last paragraph,

The statement showed that Kenny had said the Philippine government must tread carefully and should not ignore the multinational company’s warning that it could withdraw many drugs from the Philippine market if price controls are put into effect.

...
¶5. (SBU) In addition, the Association asserts that the Health
Department has been pressuring companies to sell drugs in small packages that can retail for 100 pesos, or around USD 2, offering to exempt such drugs from price controls. In many cases, this can amount to a handful of tablets needed for one cycle of a course of doses. Representatives of Pfizer warned us that for certain antibiotics, small doses can promote antibiotic-resistant bacteria, and claimed that it is being pressed to sell antibiotics that currently cost over 1000 pesos for the 100-peso fixed price. Pfizer said that if these price controls are put into effect, it will withdraw many drugs from the Philippine market.
Here now are my commentaries to the above articles.
1. About her news story, 'US embassy lobbied vs CML", I think it is obvious that ALL embassies by governments to other countries are lobby groups for the political, economic, business and other interests of those governments. For instance, the Philippine embassy in the Kingdom of  Saudi Arabia (KSA) is there to lobby Philippine interests on (a) secure oil imports supply, (b) secure more Filipino workers' placement in KSA, (c) lobby the Saudi government not to proceed with beheading or other capital punishment against Filipino OFWs convicted of some crimes in the kingdom, among others.
The same way, the US embassy -- and UK embassy, Swiss embassy, etc. -- would have talked to the authors of the CML then to protect the IPR of American, British, Swiss, other foreign innovator pharma companies here who will be affected by the major amendments to the Intellectual Property Code (IPC) re compulsory licensing (CL), special CL, exhaustion of rights (aka parallel importation), Bolar principle (aka early working), other IPR-related policies.
2. On the proposal by the DOH to "chop-chop" expensive anti-biotics into small dosages so these can be sold at P100 a piece, I think it's rather weird for the DOH to do or say that. Anti-biotic resistance (ABR) is a real and existing health risk. Once a patient develops ABR, the disease or infection will not be healed; or it can be temporarily cured, to resurface later as a new, more powerful disease, that will require more expensive treatment. The patient will be the end-loser.
One alternative to expensive vaccines and anti-biotics is to drop or remove government taxes (3-5% import tax + 12% VAT + local government taxes) on medicines. Another is to encourage the entry of more innovator companies that can supply cheaper alternative drugs (competition among innovator companies), or scout for existing cheaper generic alternatives.


Meanwhile, here are some slides presented by Reiner Gloor, Executive Director of the Pharmaceutical and Healthcare Association of the Philippines (PHAP) during the 2nd Generics Summit, September 7-8, 2011, Richmonde Hotel, Eastwood, Quezon City. The event was sponsored by the Department of Health. PHAP is the federation of mostly multinational pharma companies and some big drugstore chains. Reiner was showing the value and risks of drug innovation.


Up to 10,000 molecules and compound of molecules are invented and on average, only one will get the nod of the FDA. 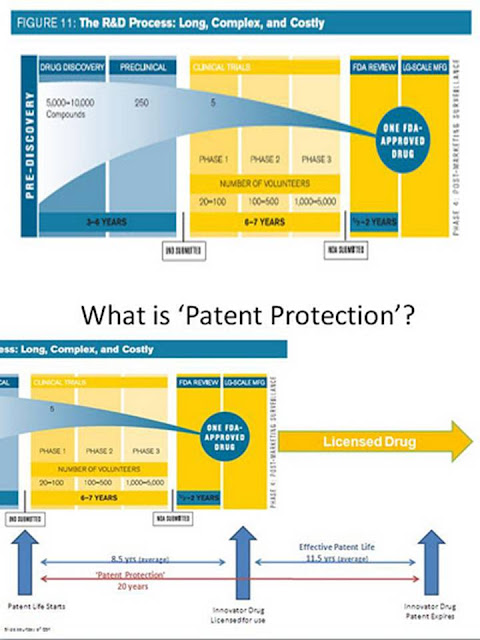 Out of the 20 years patent life of a drug molecule, about 9 to 10 years consumed by regulatory approval process to test on efficacy and safety of those new drugs. The commercial period to earn for the innovator companies is only 10 to 11 years, then the patent will expire.


Then various generic manufacturers, and the innovator companies themselves compete with each other to produce the low price, effective drugs and treatment. And this is where the public maximizes the benefits of drug innovation. 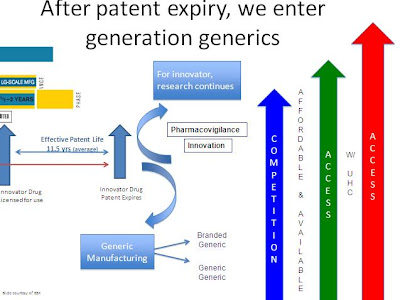 Reiner also showed one slide on the rising cost of developing one new drug. As of 2005, their industry average cost was $1.3 billion already. It should be higher at this time.


I remember a debate a few years ago with one friend in the health NGOs, she said that they do not believe that the cost of developing just one new drug would be $1 billion or more. She quoted one estimate saying it's only around $160 million. If this is so, then the number of innovator companies worldwide should drastically expand. Why be contented with being a generic manufacturer, waiting for the patent of a successful drug to expire, or spend big money to lobby governments and legislators to make it easier to impose compulsory licensing (CL) and special CL, when they can be innovator themselves? Yes, why spend big money on politics and politicians, when you can spend it on drug innovation instead?
----------