Last Sunday, October 30, I drove my old pick up to Pangasinan. My wife, two young girls and their yaya were my passengers. At the back are some old things that we are donating to our farm caretaker in Pangasinan -- an old refrigerator, a rice dispenser, an old cushion, etc. After paying at the first tollgate, I was stopped by a tollway guard, and told to park on the side. I was wondering what my crime was. 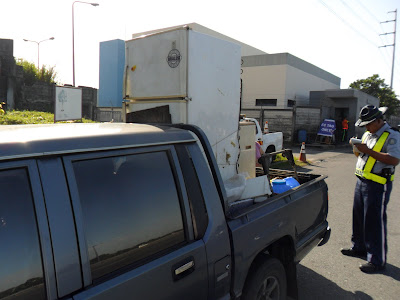 My violation, I was told, was UNSAFE LOAD NOT PROPERLY SECURED. The refrigator was tied, I tied it myself. Then it was blocked by the rice dispenser, then the old bed cushion, then the back or tail gate of the pick up. I thought it was properly secured already. 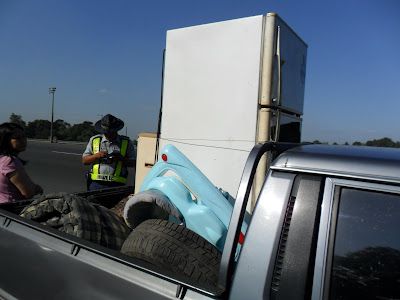 I told the apprehending officer, Mr. Orolaza, of TMC, deputized by the Land Transpo. Office (LTO), that I was driving slow, 65-75 kph even on a straight, pothole-free highway, and my 2 young girls (aged 5 and 1 year olds) were with me, so I really have to drive very carefully. He said it was not secure enough, that there should be a canvass cover. Well, I did not have a canvass cover, I didn't know that they would be so particular about it. I asked if they have a manual or a copy of the LTO regulation that states and defines what is "Unsafe Load Not Properly Secured", he could not produce any. 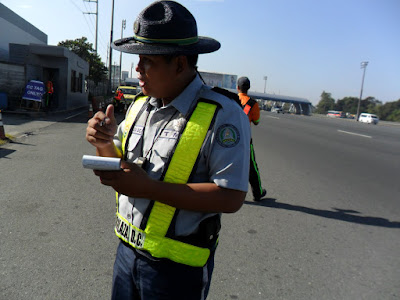 Sensing that it was fruitless to argue, I later appealed to him, "Bosing, huwag nyo na po akong hulihin, di ko kasi alam ganon kayo ka istrikto at mabagal naman ako magpatakbo", but Mr. Orolaza was determined on getting my driver's license and slapping a fine on me.

Irritated, I just shook my head at these insensitive government bureaucrats and accepted the temporary driver's permit he gave and went back to driving. He said that I can contest it at the LTO main office in Quezon City if I want to. 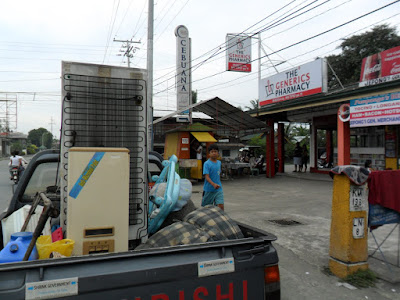 As I was driving slow, it took me more than four hours to reach Bugallon, Pangasinan, here at km. post 198, in front of the Bugallon Municipal Hall. Nothing moved unnecessarily, the refrigerator nor the rice dispenser or any other cargo did not tilt or whatever.

I was curious what that violation is all about, I went to the LTO website, clicked on Fines and Penalties, I see this, http://www.lto.gov.ph/fines_and_penalties/penalties.aspx#v_load_limits. It's Department Order No. 2008-39, SUBJECT: REVISED SCHEDULE OF LTO FINES AND PENALTIES FOR TRAFFICE AND ADMINISTRATIVE VIOLATIONS.

It's a looong list of various forms of violations and their corresponding fines and penalties. There were 97 different violations, with sub-sections on certain items. The closest violation that is explicitly stated in the Department Order that I can see is #75, Reckless Driving (it has 32 different forms of violations), letter (c) "Failure to provide canvass cover to cargos or freight of trucks requiring the same."

For this crime, the government will confiscate P1,000 from me before they will give back my driver's license. I paid the government motor vehicle registration charge and other fees last April, pay my personal income tax monthly, paid VAT on toll rates (the P195 became P218), paid VAT, import tax, etc. on diesel, etc. The government wants more, more money from citizens even for minor lapses.

I plan to write a letter of appeal to the LTO tomorrow when I redeem my driver's license. I do not know how receptive they are for such exercise. Will they give me a hard time, like make me wait for hours or days? If they will do it, I'll just pay the penalty and get out of their office as quickly as I can.

I should write a follow up story about this after I come back from the LTO tomorrow.
--------

Email ThisBlogThis!Share to TwitterShare to FacebookShare to Pinterest
Labels: LTO

If a vehicle has no plate/s - either in front, at the back, or both - is the driver guilty of offense no. 18 or 21? The LTO should be clearer because the two offenses carry different fines. (I often see motorcycles and, sometimes, even cars on the road that do not have plates...yet, the enforcers do not seem to notice.)