Preventive healthcare is oftentimes more effective than curative healthcare. Have healthy or at least non-abusive lifestyle, get certain vaccines against some known dangerous infectious diseases, while one is not yet sick.

I saw these news reports recently, they are giving hope to humanity who want early protection against certain communicable diseases. 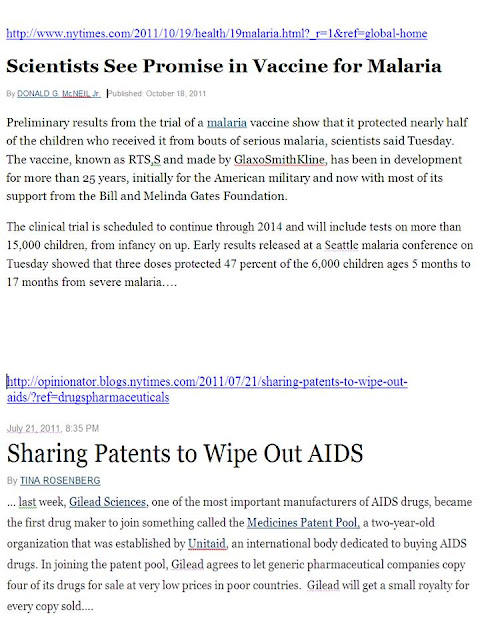 Above news is about vaccine vs. malaria. I thought that there are already existing vaccines against this mosquito-born disease.

Lower news report is about the Patent Pool to discover new drugs against AIDS. These are voluntary schemes, no coercion like compulsory licensing is involved, to develop treatment for patients suffering from, or being exposed to, AIDS.

Here's another news from Partnership for Safe Medicines (PSM) where physician-researchers have tried the drug that they are developing yet on themselves. For these physicians to do this, they must have high confidence on the efficacy and safety of their new drug and vaccine. 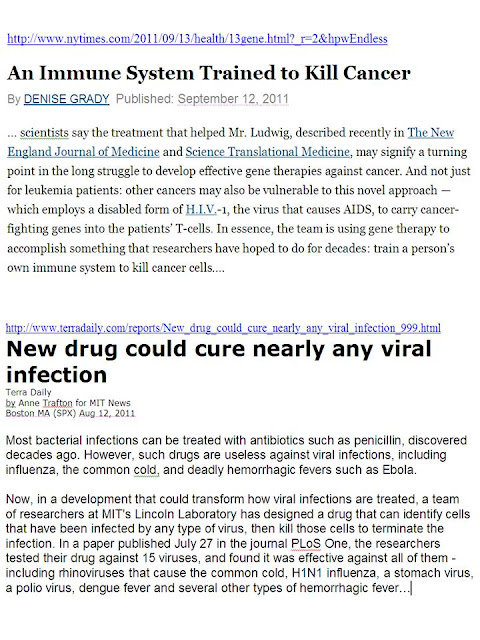 News above is definitely good news for patients suffering from certain type/s of cancer, also the family members and friends of the cancer patient. I'm particularly keen on new drugs to curtail or kill cancer. My elder brother, my sister in law, two of our wedding Godmothers, my mother's two cousins, have all died of cancer. If someday, more powerful drugs will be invented against various types of cancer, I shall be even happier. People should live long and productive lives whenever possible, that is why keeping a healthy lifestyle is important.

New drugs against infection, or other anti-biotics treatment, should be another welcome news for many people around the world. 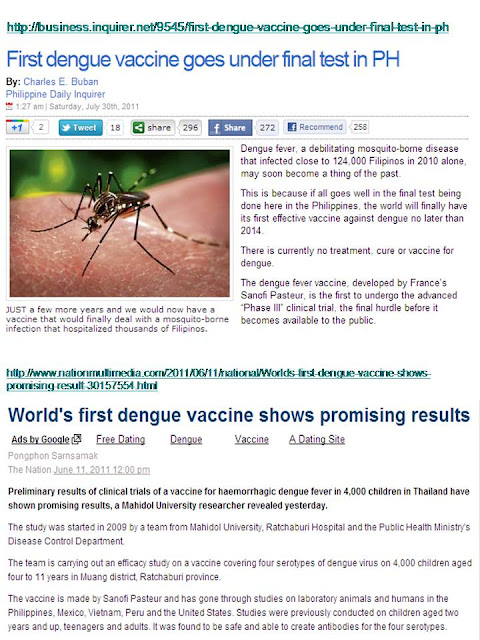 Finally, the much-awaited vaccine against dengue. It is expected to be commercially available by 2014. Some 2,000 Filipino children and 4,000 Thai children were among those who participated in the clinical tests and the results have been generally positive.

It is to be expected that the initial price will be high to allow the innovator company to recoup its high costs of developing the vaccine, compensate for failed or unsuccessful molecules and drugs that did not pass the stringent approval process. But with high volume procurement by both private and government agencies in many countries, evem the initial price can be further brought down. When other innovator companies will also commercially produce their own dengue vaccines, or when the patent by Sanofi will expire after a few years and generic drugs can be introduced and sold, the price should drastically go down, benefitting more patients from more provinces and countries.