This is among the philosophical discourses in pilipinasforum@yahoogroups nearly 8 years ago. Postings in the  PF are raw and written informally, but the content are generally serious. Unlike other PF series here, there are just a few exchanges here, and only more than 5 pages long. Enjoy.
---------

Ayn Rand will generally disagree with a Keynesian approach of uplifting human welfare. A rice farmer and fisherman can pursue their individual interests (surplus of their produce they sell to the market) and they end up providing rice and fish in our dinner tables - - welfare for both producers and consumers. This short article below by Ayn Rand (I got from my other egroups) will elucidate this philosophy...

A seemingly perennial and prolonged (1998-2003 and counting...) budget deficit situation is anti-individualism, anti-market, anti- self-interest. Why? A government which can hardly distinguish which public services promote efficiency and which ones promote complacency, even laziness and monopoly, is being kept afloat by sustained borrowings. Its philosophy is: never mind today's debts, tomorrow's taxpayers will pay them.

Should we discourage, even scare, a large segment of the productive sectors of our society -- them tax-paying professionals, entrepreneurs, other skilled workers -- with high tax rates and complicated tax system in the future, so the inefficiencies of the past will be paid? 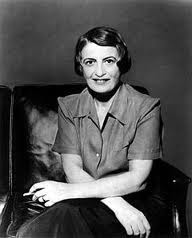 At a sales conference at Random House, preceding the publication of Atlas Shrugged, one of the book salesmen asked me whether I could present the essence of my philosophy while standing on one foot. I did as follows:

If you held these concepts with total consistency, as the base of your convictions, you would have a full philosophical system to guide the course of your life. But to hold them with total consistency — to understand, to define, to prove and to apply them — requires volumes of thought. Which is why philosophy cannot be discussed while standing on one foot — nor while standing on two feet on both sides of every fence. This last is the predominant philosophical position today, particularly in the field of politics.


My philosophy, Objectivism, holds that:

2. Reason (the faculty which identifies and integrates the material provided by man's senses) is man's only means of perceiving reality, his only source of knowledge, his only guide to action, and his basic means of survival.

3. Man — every man — is an end in himself, not the means to the ends of others. He must exist for his own sake, neither sacrificing himself to others nor sacrificing others to himself. The pursuit of his own rational self-interest and of his own happiness is the highest moral purpose of his life.

4. The ideal political-economic system is laissez-faire capitalism. It is a system where men deal with one another, not as victims and executioners, nor as masters and slaves, but as traders, by free, voluntary exchange to mutual benefit. It is a system where no man may obtain any values from others by resorting to physical force, and no man may initiate the use of physical force against others. The government acts only as a policeman that protects man's rights; it uses physical force only in retaliation and only against those who initiate its use, such as criminals or foreign invaders. In a system of full capitalism, there should be (but, historically, has not yet been) a complete separation of state and economics, in the same way and for the same reasons as the separation of state and church.
----------

Looks like a ploy to have two of my favorite ideas collide, he he. Well, foremost, objectivism as propounded by Ayn Rand is indeed pro-capitalism, and of course, pro-market. I recall in Atlas Shrugged how she presented a "new world" inhabited by objectivists, all denizens (John Galt and the rest)working and contributing to the microcosm of an economy they created, in the absence of government. They simply exchanged products and services. But they lived simple lives: no taxes, but no LOTR movies, no chicken joys, no surprises, no crisis arises. It's all very nice, but not very good, ika nga. Not that i disliked the idea of the microcosm that was created by the objectivists. I think it did exemplify the success that people can achieve if we all start afresh, cuentas claras, tabula rasa, and work for what we need. However, reality states that the world is not so. The naturally skewed allocation of skills and resource endowments ( ang iba guapo, tulad ni Nonoy O+, ang iba cute tulad ni Kat Fermeza) among people and among nations is a fact. And in a fast-globalizing world, i do not know if the theoretics of Ayn Rand's microcosm will in the bigger world hold. 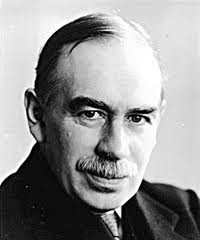 Besides, I do not think that Keynesians are not pro-market. Keynes is pro-market, Keynes is pro-capitalism. It is no way near the ideals of those we deem as socialists and communists. Keynes is even pro-globalization. I recall him to have been in the Bretton Woods activity that led to the setting up of the IMF in 1994. Barkada kami niyan eh, roommate pa :-). Only, Keynes thinks that the market left alone, economies may have at times the tendency to settle (achieve equilibrium) in points characterized by highunemployment. In this case, government must prop up aggregate demand to tame unemployment. Not that government will intervene all the time, pareng Noy, but only in cases wherein the economy seetles at high unemployment levels. Kumbaga, pasundot sundot lang, when the wheels of the market economy encounters a pothole on the road, espeically potholes that are are hard to get out of.

Therefore, Ayn Rand and Keynes are not poles apart in theory. They belong to the same strand of thought, only different in intensities. Kumbaga, kung sa usapang hue, may shade of blue. May sky blue, may light blue, may blue-gray, may true blue. Ang sagot ko naman, conforme sa talong...he he he... but i digress.

In Ayn Rand's microcosm, everybody works for their needs. But at a bigger scale, in Keynes macroeconomy, there will be workers willing to work but no work is available. Simply because technology, among others, will allow one person to do the work of two, or even ten. Technology makes us efficient. And efficiency is what drives markets to work. Competition seeks efficiency.

Ahhh. I guess the difference between Ayn Rand and Keynes is that Ayn Rand is a philosopher, while Keynes is a mathematician-economist. And their similarity? Tumpak! I love them both. By the way, my daughter's name is Ayn Rand. If i end up having a son in the near future (ibang nanay naman, he he), guess what will be his name... Keynes? nah. Oyn Rond.

> Should we discourage, even scare, a large segment of the productive
> sectors of our society -- them tax-paying professionals,
> entrepreneurs, other skilled workers -- with high tax rates and
> complicated tax system in the future, so the inefficiencies of the
> past will be paid?

I totally agree. And I think my agreement to Macho Camacho's proposition to expand the revenue base is only because of the plan's character of not imposing new taxes but only rationalizing them, even enforcing them. For example, lawyers and medical professionals get away with income taxes because they charge professional fees without issuing receipts. For example, the percentage/part of the professional fee that we are supposed to charge against our Philhealth insurance are still charged from us because they substract it from the total bill that is sent to Philhealth and ask us to pay the fee separately and in whole. I think by rationalizing and evenly enforcing taxation, we will even encourage the tax-paying honest professionals to pay kay pedro and kay pedro.

If Ayn Rand -- born & studied in Russia, migratred to America -- is to teach Philosophy in any Philippine university, where would she go? Ateneo? La Salle? Silliman U? UA&P? UP? UST?... (alphabetical order yan ha)
Ateneo? I'm sure not. Ateneo's "man for others" motto is contrary to the philosophy of objectivism.

UP? No -- if the "Iskolar ng Bayan" mantra is to be adopted. Yes -- if the free-soulness of the university is adopted. Definitely she'll be no friend of the nat-dems and those student activists (like us, when we were 20-40 lbs. younger) who march in the streets demanding "greater state subsidy to tertiary education". She'll be an activist of the reverse kind: demanding that the state should minimize its tax-ing business, let the parents and students work their butts out to secure good education for themselves and their children.

Anyway, I like this part of Objectivism's ethics: "Man - every man - is an end in himself, not a means to the ends of others; he must live for his own sake, neither sacrificing himself to others nor sacrificing others to himself; he must work for his rational self-interest." Objectivism therefore, rejects altruism and a highly interventionist state, even if the claimed rationale for intervention is provide "welfare" to other people. After all, many of those government inefficiencies and corruption were made in the name of "providing welfare."

May I join your delightful reparte about Ayn Rand and JM Keynes? Si Ayn Rand hindi land true blue, deep blue pa, because the more you think about Objectivism the more you realize that self-interest is actually about community interest, and this is validated by the beautiful mind himself, John Nash. If you look deep down, we were all built for a higher purpose beyond ourselves. Take a simple example from personal experience--on my own, I love to smoke, but for the sake of my family's health, I minimize it. Fact is, the whole point of making ourselves better is for the purpose of sharing with others the person we become. Applied in economics, I believe this to be the driving principle behind economic cooperations. We can't all get what we want, otherwise, we will never get to that social indifference curve where (theoretically) everyone is happy; but when everyone is happy, happy na rin tayo diba? So we get pa rin what we want. Di ko lang alam if Ayn Rand ever got to that conclusion. She resisted communism too much kasi to see its beauty. But then again, there's nothing beautiful about the abuses that happened in Russia. But as the ol' bard says, "Aye, there's the rub"... and here come the age-old contradictions of life--We must find ourselves only to lose it. Jesus says we must die to ourselves in order to achieve life eternal. Zen people say, "once you find the buddha, you must kill it", and so on. In the end, what does all these tell us? Iba-iba siguro ang mga responses dito. But for me, it tells me that the fight is within. To quote the same soliloquy, "To be or not to be, that is the question".

Tungkol naman kay Keynes, napaka-practical na manong yan. He said that if we all waited for the market to clear (because it always does in the long-run), we may all be dead! Kaya nga short run lahat ng models nya! I don't know about all of you but I find a lot of wisdom in that. The guy knows that change is the only sure thing in this world, so he advocated theories that would enable us to do what we can today. Hindi naman nya sinabi na gov't intervention lang ang pwedeng gawin diba? Siguro no'ong panahon nya, appropriate yon, and hey, he did get the world out of the great depression! And he's not anti-market, by the way. Pratical lang si Manong Keynes, because the truth of the matter is, markets can and do fail. So when they fail, fix!

I don't know how Keynes got such bad publicity. Classical economists and new classicals kasi portray him as this all-interventionist control freak. If I'm not mistaken, he didn't think the fixed exchange regime established at Bretton Woods (after the war) would last, and true enough, it didn't. Practical lang si Manong not to be beholden by the market...and frankly, so should we.