I saw two news reports today re China's entry into the vaccine production and exportation industry. One is from AP and posted in yahoo news and other papers, the other is from the National Bureau of Asian Research (NBR). 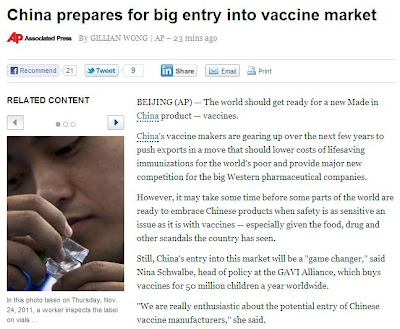 The report written by Gillian Wong of AP says that China is still readying for this in the next few years, and not yet ready this year or next year or next 2-3 years. And the author also recognizes that there is that big question mark in the minds of the public in other countries about the quality of China-made drugs and food products due to several scandals of contaminated food manufactured in China. And here are parts of the report:


China's vaccine-making prowess captured world attention in 2009 when one of its companies developed the first effective vaccine against swine flu — in just 87 days — as the new virus swept the globe. In the past, new vaccine developments had usually been won by the U.S. and Europe.

Then, this past March the World Health Organization announced that China's drug safety authority meets international standards for vaccine regulation. It opened the doors for Chinese vaccines to be submitted for WHO approval so they can be bought by U.N. agencies and the GAVI Alliance.
"China is a vaccine-producing power" with more than 30 companies that have an annual production capacity of nearly 1 billion doses — the largest in the world, the country's State Food and Drug Administration told The Associated Press.

But more needs to be done to build confidence in Chinese vaccines overseas, said Helen Yang of Sinovac, the NASDAQ-listed Chinese biotech firm that rapidly developed the H1N1 swine flu vaccine. "We think the main obstacle is that we have the name of 'made in China' still. That is an issue." 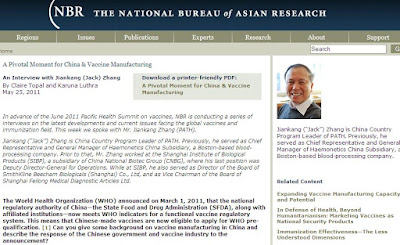 Currently, China has 36 vaccine manufacturers that produce 49 types of vaccines against 27 diseases. The country’s annual manufacturing capacity is nearly one billion doses. WHO’s clearance opens the door for these companies to apply for WHO vaccine pre-qualification—a regulatory status that opens the door for United Nations agencies and governments to begin ordering the vaccine— with the aim of becoming eligible for vaccine procurement by the United Nations Children’s Fund (UNICEF).

In order to speed up the process of obtaining WHO pre-qualification, the Chinese government is now offering more support and encouragement to domestic vaccine manufacturers than ever before, particularly to state-owned enterprises such as China National Biotec Group (CNBG) and other leading vaccine companies. This top-down approach has proven to be the most efficient way to move things forward in China.

The announcement will motivate domestic manufacturers to strengthen vaccine development partnerships with international organizations at broader and more strategic levels. More government funding will also pour into companies working toward the goal of WHO pre-qualification. Furthermore, a new interest in vaccine technology will encourage Chinese scientists who are now working overseas to return to the country in order to leverage this opportunity....

During the Conference of Generic Drugs in Asia (CGDA) in Taiwan last week, Nov. 19-21, there was no speaker from China -- generic manufacturers or the State FDA or other industry associations from the health sector. I did not ask the organizers, FAPA and the Pharmaceutical Society of Taiwan why, I just assumed that perhaps it has something to do with the old China-Taiwan tension.

China is the homebase of generic drugs production worldwide. As of 2008, 97 percent of total pharma market by volume was already accounted for by generic drugs. See one graph there from Mr. Roy Fan in Generic Drugs Asia 3: FDAs and the Consumers, November 25, 2011. Next to China would be India, Brazil, Mexico, and other "pharmerging markets".

Given the aggressive development of future China-made vaccines because of the various incentives or subsidies to be extended by the China government, plus the high demand for cheaper vaccines worldwide, when supply meets demand in terms of low prices, the role of governments, especially the various Food and Drugs Administration (FDA) or similar bodies, is to protect public health via more stringent approval process for imported drugs and vaccines, against substandard and counterfeit ones.

But this is not a 100 percent viable scenario due to weak or limited resources and capacity of many FDAs in developing countries like the Philippines. So one "clearing house" scheme would be for those generic vaccine exporters from China and other countries to partner with existing and known pharma companies in the local market, both innovator and generics. The FDA can then focus on lesser-known or zero track record new players yet. This would sound "penalizing the smaller players". Somehow true, and this will encourage the new players to prove their worth, or to partner with more established players on some products.

On another note, there is also one good development in China that can help improve global confidence of their pharma products and exports. It is the establishment of anti-counterfeiting and intellectual property rights (IPR) protection agency. 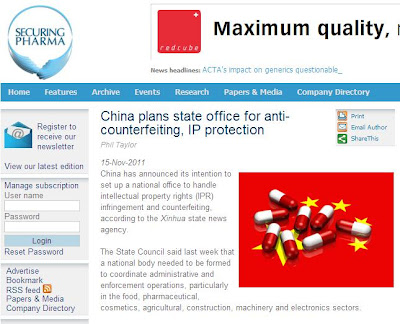 The US government said just a few days ago that it had uncovered 1,800 instances of suspected counterfeit parts and equipment sold to the Department of Defense, for example, with China emerging as the most common country of origin.

The new office will exercise stricter supervision over manufacturers, in part through inspections, and encourage police forces and local government bodies across different regions in China to work together on investigations involving IPR infringement and product counterfeiting.

The State Council statement also calls for greater oversight of local government, tighter regulation of Internet trade and stronger penalties for those found guilty of partaking in this type of criminal activities.

China's Ministry of Public Security said earlier this month that police have solved 28,000 cases involving IPR infringement and counterfeiting over the course of a year-long crackdown on the activities, focusing on fake luxury goods, pirated books, audio and video and counterfeit medicines and foods.

All told the cases represent around 500 billion yuan ($80bn) worth of goods if calculated in terms of the prices of genuine, licensed products, said the Ministry...

See that? A communist government recognizing more and more the value of private property rights, whether physical property or intellectual property. This is because while the China government can arbitrarily disrespect such property rights within its national territory, it cannot do so in the international market.

By moving towards this direction, the China government -- and other developing country governments -- will recognize that IPR protection related to drug innovation, whether newly-developed drugs or generic drugs and vaccines, is important, both for corporate finance and business aspect, as well as protecting public health.
Posted by Bienvenido Oplas Jr at 6:54 PM