Expansion of existing urban centers and urbanization of rural areas is the norm and natural path of many cities and areas in the planet. Congestion is the natural result as people try to squeeze themselves in a limited space where various amenities and work and business opportunities are available; things that they cannot easily find in rural areas.

In East Asia, cities from China and Japan are the biggest in population size. In Southeast Asia in particular, Metro Manila is the biggest. (See table)

Traffic congestion is among the most prominent problems of many big cities, like those with population of 5 million or more people.

In Metro Manila and other big Philippine cities like Cebu, Iloilo and Davao, the growth in number of vehicles is much faster than the growth of new roads and highways being constructed.

This subject was discussed in a round table discussion organized by the Albert del Rosario Institute (ADRi) on “Greater Manila Transport Infrastructure Solutions: Thinking Beyond EDSA” last Oct. 28, at the Tower Club in Makati City.

After the opening message by ADRi President Victor Dindo Manhit, Mr. Eduardo Yap of the Management Association of the Philippines gave a good presentation that compared the Metro Rail Transit (MRT)/Light Rail Transit (LRT) system in Metro Manila to the train systems in Bangkok, Jakarta, and Taipei.

Ours are small and short compared to those three and many other East Asian cities. The population figure that he gave refers to “Mega Manila,” which includes nearby provinces like Bulacan, Pampanga, Rizal and Cavite. (See illustration) 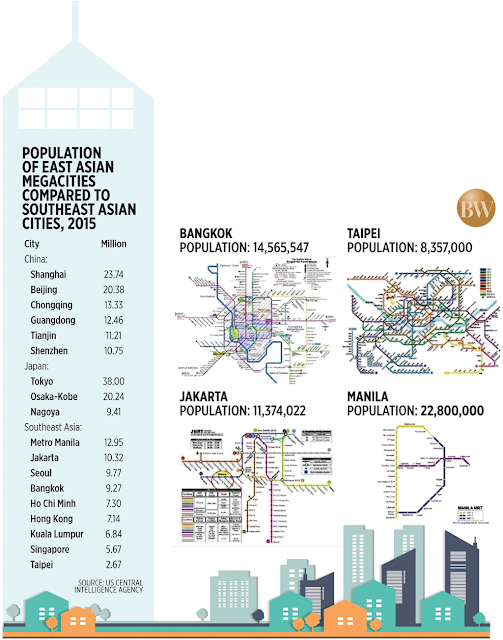 British physicist and mathematician, Sir Isaac Newton (1642-1727) was known for his contributions in classical mechanics and physics. His famous theory is the so-called “Newton’s Laws of Motion.” Upon closer examination, it seems that the laws of motion in physics can also apply in society and economics.

Application: Bureaucracy in command and control state will remain in that state unless huge public pressure is applied on it.

There is a culture in the bureaucracy where the officials declare, “No one moves, no one builds anything, unless they get our signatures and permits first.” A state of inertia and inaction should be sustained unless players and stakeholders first get the signatures of officials and regulators.

And that explains how unsolicited proposals to build various MRT lines, skyways, and new tollways via build-operate-transfer (no cost to the government) two to three decades ago never got off the ground.

The Metropolitan Manila Development Authority (MMDA) policy is to keep blaming private players -- the car owners, bus and van operators and drivers, even passengers. Thus, policies like cars number-coding prohibitions and similar rules covering some provincial buses and vans restrict the capacity and mobility of high occupancy vehicles unless they secure a legal franchise which, by itself, is very costly and time-consuming to get. People have to endure three or four rides one way (tricycle then jeep/bus, then MRT/LRT, then jeep or tricycle to final destination), and so many are forced to drive their cars, which exacerbate the traffic congestion.

Third law: “For every action, there is an equal and opposite reaction.”

Application: For every government intervention, there is an equal opposite distortion.

When government prohibits people to drive their own cars on certain day of the week, many people buy a second or third car, especially if their village is far from the main road. And this exacerbates traffic congestion. When government prohibits certain provincial buses to enter key areas in Metro Manila, many of these car-owning probinsyanos take their cars or motorcycles to Metro Manila, and this again worsens traffic congestion.

One alternative that the MMDA and Department of Transporation and Communications/Land Transportation and Franchising Regulatory Board should consider is that instead of segregating between Metro Manila and provincial buses, they should allow those bus companies to choose their routes. Say from Cavite to Fairview or Pasig-Marikina, and these buses can pick up and unload passengers along EDSA or C5. Make the bus-train commute more convenient and cost-effective, and many people will leave their cars at home. In addition, many jeepneys and tricycles will die a natural death, without creating a new law or Administrative Order or local government unit ordinance. And we shall have less traffic.

Traffic congestion is an engineering problem with engineering solutions; it is a result of market failures but can be solved by market solutions. Like those unsolicited proposals to build more urban rails since 20 or 30 years ago. Like those air-con vans that bring office personnel from their houses/villages straight to Makati, Ortigas, Bonifacio Global City, Eastwood, Manila, airport, and so on, with just “one ride.”

Government should learn to step back and allow market players to initiate market solutions to the traffic congestion. Government should focus on securing road right-of-way for important infrastructure projects and enforcing property rights. Enforce the rule of law, like the law against bus hold-uppers, terrorists, murderers, and kidnappers. Transporting people and goods to various destinations is not a crime that requires lots of permits, taxes, and expensive franchises.

Bienvenido S. Oplas, Jr. is the head of Minimal Government Thinkers, Inc., and a Fellow of the South East Asia Network for Development (SEANET).
------------