KUALA LUMPUR -- The protection of property rights and promulgation of the rule of law are the cornerstones of peace and order in society. When such property rights are removed and unprotected, society can quickly degenerate into chaos and disorder. For instance, your house or car is also somebody else’s house and car, and he/she can take and occupy it anytime, anywhere.

Measuring property rights protection across many countries has been done by the Property Rights Alliance (PRA), a network of 74 independent, nongovernment, and market-oriented think tanks from 57 countries around the world and is based in Washington, D.C.
PRA produces the International Property Rights Index (IPRI) annual reports, which is a measurement of how governments in the countries covered promulgate the rule of law and protect property rights, public and private, physical and non-physical or intellectual.

The IPRI 2015 Report is launched today here at Park Royal Hotel in the capital city of Malaysia. The event is jointly sponsored by the PRA and the South East Asia Network for Development, which is a regional project of the Institute for Democracy and Economic Affairs in Malaysia.

The event’s theme is “Protection of Property Rights, Economic Growth, and the TPP.” The Trans-Pacific Partnership (TPP) is included in the theme because of its recent approval by the original 12 member-countries including Malaysia. TPP of course will not be implemented unless each member-country ratifies the agreement.

IPRI is derived by getting the score (one to 10, 10 being the highest) of each country covered in three major areas:

2 Physical Property Rights (PPR), which includes registration and protection of physical properties, and access to loans; and

As a result, countries with high scores in two or all three of these areas will have a high IPRI score and global rank.

In the 2015 Report, the top 10 from 1st to 10th places are: Finland, Norway, New Zealand, Luxembourg, Singapore, Switzerland, Sweden, Japan, Canada, and Netherlands.

For this piece, the focus will be on Asia-Pacific Economic Cooperation (APEC) member-countries that are covered in the IPRI annual reports. Only 19 countries are in this table because Brunei was not included in the IPRI 2014 and 2015 Reports while Papua New Guinea was never included in all IPRI reports, past and present. (See Table) 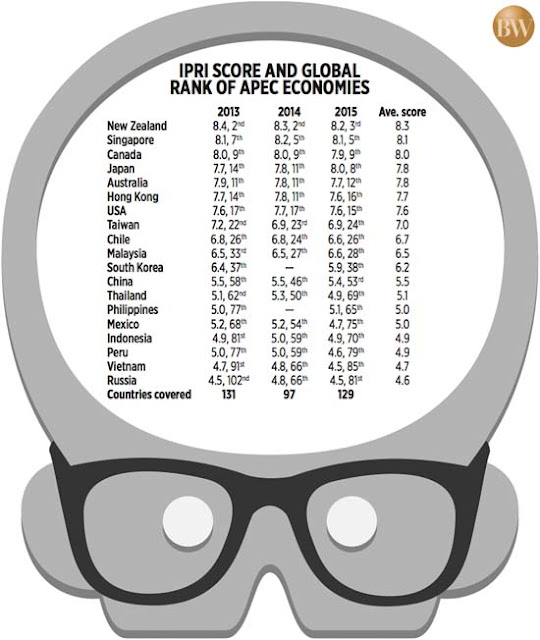 APEC countries that were not included in the 2014 Report because of some incomplete data were given this observation in that report:

2 South Korea: Over the 2010-2014 period of analysis, the South Korea IPRI score fluctuated around the value of 6.3. PPR data is missing from the analysis completely and IPR is missing for 2010 and 2011... In general, the overall IPRI value for South Korea is good and stable.

The Philippines’ jump in global rank from 77th in 2013 to 65th in 2015 is somehow impressive despite the flat score of 5.1 and 5.0, respectively. The reason for the big jump is because many countries have suffered significant decline in their scores from 2014 to 2015.

Within the Association of Southeast Asian Nations-6 that are also APEC members and covered in this annual report, there is a mixture of results over the years. The bad news is that (a) the gap in overall score between high-ranked Singapore and low-ranked Vietnam was very wide, with the average score of the former almost twice that of the latter; (b) Thailand and Vietnam suffered significant declines in scores and global rank, both falling by at least 19 notches in ranking from 2014 to 2015; and (c) Indonesia global rank also fell significantly from 59th in 2014 to 70th in 2015.

The good news is that Singapore and Malaysia have managed to retain their high scores and global ranking.

The results of this annual study should prod the governments of the Philippines and other East Asian economies to remember the main function, the raison d’être or reason for existence, of governments: to enforce the rule of law, the protection of the citizens’ right to life (against aggressors), right to private property (against thieves and destroyers of properties), and right to liberty (against bullies and despots).

There is a positive relationship between economic development and economic freedom, and the strength of property rights protection. Civil society leaders should keep reminding governments of this reality, and dissuade the latter from enacting and implementing various programs that directly or indirectly erode the respect of private property.

Bienvenido S. Oplas, Jr. is the President of Minimal Government Thinkers, Inc., which is one of the 74 think tank-members of PRA. He is also a SEANET Fellow.
-----------