* This is my article in BusinessWorld yesterday, November 13.

Expensive electricity and unstable power supply are two big concerns for many sectors and businesses in the Philippines. These problems have adverse economic and social impact for the people.

Electricity-intensive sectors like hotels, malls and manufacturing are forced to raise the prices of their products and services. Many local government units cut on the use of street lights. When many streets are dark at night, there are more crimes and road accidents that happen, and it is the poor who are likely to be victimized. It is them who walk on dark streets, where thieves, rapists, and murderers hide.

Policies and measures therefore, that further raise our already expensive electricity should be avoided. Unfortunately, the reverse is happening, as certain business sectors and the Department of Energy (DoE) expand those policies that contribute to more expensive electricity. Like the feed-in tariff (FIT) under the Renewable Energy Act of 2008 (Republic Act No. 9513; RA).

After delaying the implementation of FIT from 2009 to 2011, the Energy Regulatory Commission was pressured to grant the renewables lobby in July 2012, but at a lower rate as requested by the National Renewable Energy Board (NREB). (See Table 1)

Of the four new renewables (the “old renewables” are geothermal and big hydro), solar is the most problematic. From the original 50-megawatt (MW) allocation, it was raised by former DoE Secretary Carlos Petilla to 500 MW, in exchange for lower FIT for the next 450 MW.

Then the Philippine Solar Power Alliance, the main solar lobbying group, sent a letter to the DoE last June asking to expand the solar FIT allocation from an already expanded 500 MW to 2,000 MW -- a 1,500-MW hike in the allocation.

This will make expensive electricity a bigger problem in the future. The FIT allowance has been collected since February at P0.0406/kWh. There are projections that this will rise to P0.13/kWh or more by 2016.

FIT has gone up and continues to go up in Germany, Denmark, Spain, United Kingdom, and other European countries.

Germany has one of the world’s most elaborate renewables subsidy schemes. The feed in act (similar to our FIT) has been rising as more renewables, wind and solar especially, were added yearly to the energy mix and electricity distributors are forced to buy them even when cheaper electricity from coal, natural gas, nuclear and hydro are available. (See Table 2) 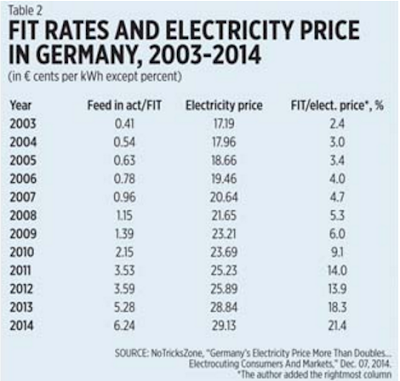 From a negligible 2.4% of total electricity price in 2003 up to 21.4% in 2014, the FIT is now a major cost contributor to expensive electricity in Germany which is now second highest in Europe, trailing Denmark.

What makes FIT a formula for ever-rising price of electricity?

As contained in Section 7 of RA 9513, FIT forces the following:

(a) Priority connections to the grid for electricity generated from emerging renewables such as wind, solar, ocean, run-of-river hydropower and biomass power plants,

(b) priority purchase and transmission of, and payment for, such electricity by the grid system operators;

(c) fixed tariff to be paid to renewables producers for 20 years; and

The RPS as contained in Section 6 of the law, is the minimum percentage of generation from eligible renewable energy resources to be set by the NREB.

This means that even if cheaper power from say Quezon coal or Sual coal, Magat or Pantabangan hydro, Sta. Rita or Ilijan natural gas are available especially during non-peak hours, but wind power from Ilocos are available, Meralco and the various provincial electric cooperatives in Luzon grid are forced to buy from the expensive wind power plants.

Aside from FIT and RPS, RA 9513 gives many other subsidies or relaxation of regulations and taxation to the renewable producers, privileges that are denied to producers of conventional but cheaper power sources. These privileges include: (a) Income tax holiday for seven years; (b) duty-free importation of RE machinery, equipment and materials within the first 10 years; (c) special realty tax rates; (d) net operating loss carry over to be carried for the next seven years; (e) 10% corporate tax rate (not 30%); (f) tax exemption of carbon credits; and (g) tax credit on domestic capital equipment and services.

This writer is not against renewable sources per se. They are fine, along with geothermal, big hydro, coal and natural gas. What is objectionable is the cronyism and favoritism granted to the renewables which results in ever rising electricity prices in the country. The case of Germany is already a guide for us.

Government intervention and cronyism in energy policy is wrong and counter-productive. Governments should get out of electricity pricing and stop forcing grid operators and electricity distributors to buy from renewables even if their rates are expensive. RA 9513 needs major amendments to remove the FIT and RPS schemes.