* This is my column in BusinessWorld yesterday.

The search for affordable and competitive electricity prices in the Philippines and elsewhere remains a continuing adventure for consumers and many industry players.

In a previous column entitled “DoE’s new circular will raise, not lower, electricity prices” (Oct. 21), it was argued that the Department of Energy (DoE) order mandating competitive selection process (CSP) by distribution utilities (DUs) would have the potential of increasing, not lowering, electricity prices.

There is an existing platform for CSP by electricity producers and distributors in the country via the Wholesale Electricity Spot Market (WESM), created under Republic Act No. 9136 or the Electric Power Industry Reform Act of 2001 (EPIRA). Managed by the Philippine Electricity Market Corp. (PEMC), the spot market became operational in June 2006 and it allowed the Philippines to join three other Asian developed economies -- Japan, South Korea, and Singapore -- to have a power exchange market. (See table 1) 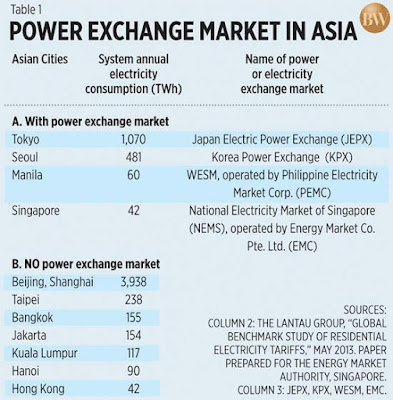 RECENT WESM PRICES
During the WESM Market Participants Update sponsored by the PEMC last Thursday, Oct. 28 at Intercon Hotel in Makati, the corporation reported uptick in WESM prices from April to June 2015, then significant decline from July to September 2015. The main reason is the increase in power demand in May-June due to warm weather, then decrease in power demand in the wet and cool weather of July to September. There is also bigger capacity by the hydro power plants. (See table 2)

The September price is really good news for the consumers, be they residential, commercial, or industrial. Also during the period April to September 2015, total market transactions at WESM was 33,101 gigawatt hours (GWh), of which 91.4% are done via bilateral, medium- and long-term contracts and 8.6% via spot market contracts.

GOVERNANCE ISSUES IN PEMC
From the WESM Web site, the PEMC Board is composed of 15 representatives/directors from various sectors of the electric power industry, plus independent members:

The presence of the DoE Secretary as Chairman of the PEMC Board should be temporary and not extended with no clear timetable. Under Section 30 of RA 9136 it says that:

“...Not later than one (1) year after the implementation of the wholesale electricity spot market, an independent entity shall be formed and the functions, assets and liabilities of the market operator shall be transferred to such entity with the joint endorsement of the DoE and the electric power industry participants.”

WESM was created in June 2006. This means that an independent market operator should have been in place by June 2007, but more than eight years after, this did not take place. What happened?

There are many government agencies regulating the power sector already: DoE (overall), Energy Regulatory Commission (tariff rates), Securities and Exchange Commission (corporate matters), Department of Environment and Natural Resources (environmental permits), Bureau of Internal Revenue (national taxes), local government units (local taxes and permits) and so on. Having government as key player within PEMC is unnecessary and a violation of EPIRA.

The key to having affordable and competitive electricity prices is via competition among market players, especially among generation companies -- harsh and fierce competition as much as possible. More government regulations, permits, and taxes do the opposite and result in market distortion, expensive electricity and unstable supply in certain periods of the year.

PEMC should be allowed to operate as truly independent of government. Let the various players, gencos and distribution utilities, and consumers, and independent directors, debate and settle among themselves various issues with the end-view of having low and competitive electricity prices for the consumers.