* This is my article in BusinessWorld last Thursday, November 04, 2015.

The most hard working, most efficient persons will not be able to produce all the goods and services that they need for themselves and their families. But there are always other people willing to produce these things or render these services in exchange for money, useful goods, and services.

On the macro level, no country or economy can prosper quickly without trade. And that includes countries that incur frequent trade deficits (in which their imports exceed their exports). Imported machines, vehicles, and computers become inputs for several activities used for the production of goods and services in the domestic economy.

Since trade is a very useful human endeavor, trade should be left as free as possible, with the least or minimum regulations and taxation by governments. The only traded goods that need heavy government regulations and inspections are guns, ammunition, bombs, poisonous substances, and other products harmful to public health and security.

In the Association of Southeast Asian Nations (ASEAN), a handful of countries impose few trade regulations while the others, including the Philippines, impose more.

Below is the result of the World Bank’s (WB) “Ease of Doing Business 2015” Report on International trade.

Covering 189 countries, the report shows the global rankings of ASEAN members. New comers to the ASEAN, Cambodia-Laos-Myanmar-Vietnam (CLMV) were at the bottom.

Based on the report, it would take around three weeks for an exporter to finally move his containers out of CLMV, versus less than one week in Singapore and around two weeks for exporters in Malaysia and Thailand. (See Table 1) 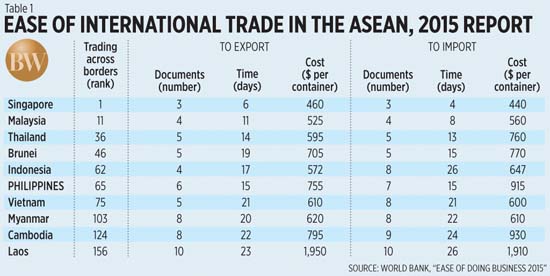 The Philippines was midway among the 10 countries in the ASEAN in terms of global ranking, but the cost to export and import were third-highest in the region, trailing Laos and Cambodia. That is not the right way to treat our exporters and importers.

The WB recently released the “Ease of Doing Business 2016” Report. The categories in “Trading across borders” have changed from the 2015 Report.

Emphasis was given to time and cost to export and import and hence, countries that are contiguous to each other in a single market ranked high. Thus, those jointly occupying the #1 global rank are 17 countries in the European Union (EU): Austria, Belgium, Croatia, Czech Republic, Denmark, Estonia, France, Hungary, Italy, Luxembourg, Netherlands, Poland, Portugal, Romania, Slovak Republic, Slovenia and Spain.

Why? For these countries to send their goods abroad, only one hour is spent for documentary compliance, zero hours for border compliance, only 2 hours for domestic transport, and so on. 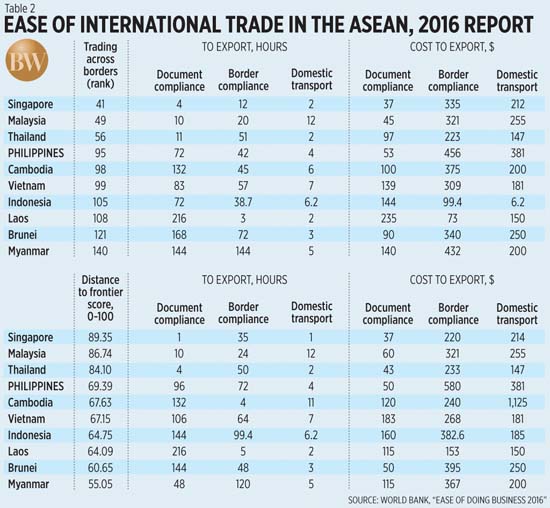 We can interpret the above ranking like this: If those 17 EU countries were not included in the ranking and Singapore has dropped from #1 (rank in the 2015 Report) to 11th with South Korea the new #1, the following would be the new global rank of the other 9 ASEAN countries out of 172 countries covered: Malaysia, 18th; Thailand, 25th; Philippines, 64th; Cambodia, 67th; Vietnam, 68th; Indonesia, 74th; Laos, 77th; Brunei, 90th; and Myanmar, 109th.

Under this formulation,not much has changed in the global rank of the Philippines and other ASEAN countries compared to the 2015 Report.

The Philippines in particular needs to reduce the cost of international trade. Philippine exporters pay the highest, at $456, in border compliance and another $381 in domestic transport, among the ASEAN.

Our importers also pay the highest in border compliance, at $580, and second highest (next to Cambodia) in domestic transport and pay $381.

Trade is beautiful and useful.

Imposing higher costs owing to various government taxes through fees and fines is unwise. Governments should allow trade to be as free and less costly as possible.

Bienvenido S. Oplas, Jr. is President of Minimal Government Thinkers, Inc., and a Fellow of the South East Asia Network for Development (SEANET).
------------