BIG governments almost always means big defense and military spending. There are other big governments which do not spend heavily on armaments and armies but they are a few.

Here are the recent data of arms exports (SIPRI trend indicator values) as reposted by the WB.

"Arms transfers cover the supply of military weapons through sales, aid, gifts, and those made through manufacturing licenses. Data cover major conventional weapons such as aircraft, armored vehicles, artillery, radar systems, missiles, and ships designed for military use. Excluded are transfers of other military equipment such as small arms and light weapons, trucks, small artillery, ammunition, support equipment, technology transfers, and other services." 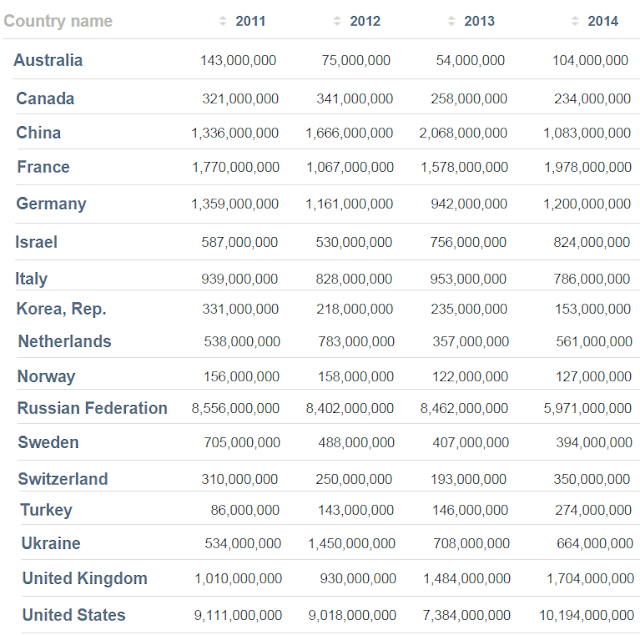 Government is coercion. It's the single biggest characteristic of any government anywhere around the world. They only differ in the extent of coercion that they impose upon their citizens.

The bigger the extent of coercion, the bigger the political dissent by the citizens, even if kept in private. Dictators and government leaders know this. In addition, there are also conflict among BIG governments themselves like territorial disputes. Thus, they need to keep huge police forces, army, navy, air force and armed units. And they give them lots of guns, bombs, tanks, battle ships, fighter jets and choppers, radars and communication equipment, and other hardwares.

Below is a nice chart by The Economist, Present Arms, March 23rd 2011 issue. Their primary source of data is the Stockholm International Peace Research Institute (SIPRI).

The US, Russia and Germany supplied 64 percent of all arms importation by all countries around the world from 2006-2010. Manufacturing and selling guns, ammunitions and bombs is one huge business. It is a highly sustainable business.

All dictators, monarchs, kings, emirs, sultans, prime ministers and presidents always want to show their huge stockpile of arms, bombs, missiles, tanks and other war paraphernalia during national day or independence day parades. A wide phalanx of police and military generals, colonels, admirals and other officers are clapping and smiling at the huge amount of weapons of death and destruction, carried and operated by the men and women trained to kill and destroy, under their commands.

When wars erupt between countries or within a country (ie, a civil war), the immediate target for destruction and demolition by their respective soldiers are the military targets of the enemy. Whoever wins, or if a stalemate results, each warring country will need to re-arm again and prepare for another round of war, actual or imagined. And that's how the arms exporting countries and their businesses make tons of money.

Huge arms expenditures and BIG governments, they go hand in hand. Always.
Posted by Bienvenido Oplas Jr at 10:16 AM

So long as there are two humans on this world, there will be war.

Humanity was forged within the furnaces of hunger and predation for ages, and it is always a great surprise when modern man discovers that he is little better, if any better, than his brutish ancestors.

War costs a great deal of money, and dictatorships relish in the need for more military power. Even so, it is truly rare to find a revolution that doesn't prop up another hated dictatorship. So man continues his eternal quest to dominate his greatest enemy, man.

"So long as there are two humans on this world, there will be war." Hmmm, rather depressing assessment. If that was true, then there should be millions of wars on-going around the world and the population of the planet should be shrinking, not rising.