IBON Foundation maintains its sensational and not-so-deep research, nice on graphics but shallow on comparative numbers. I am referring to these 3 infographics they produced and sent to local media. A friend sent this to me to get my reaction, I said that I will blog my comments.

On point #3, the number of poor people have increased. Well, the definition  of "poor" is evolving. Until a few years ago, it was earning $1/day/person or less, now it's around $1.5/day/person. Before, the poor were riding cows or horses, now they ride motorcycles or buy 2nd/3rd-hand cars or jeeps. Before, the poor were using smoke signals to send a message, now they have fb and twitter on their cheap smart phones. 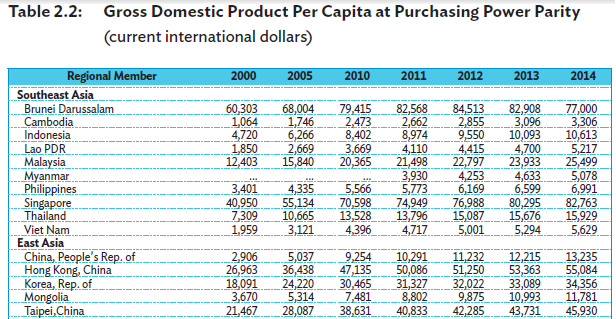 ource of 2 tables:  ADB, Key Indicators for Asia and the Pacific 2015.

Since 30+ years ago, and possibly 20 or 30 years from now, IBON reports and will only report the ugly, the uglier and ugliest about the PH economy. Kasi hindi pa tayo socialist Philippines eh, so things are bad and ugly and depressing. :-)
-------------