On March 20, 2000 (15+ years ago), The Independent ran a story predicting that "within a few years winter snowfall will become 'a very rare and exciting event.'" No more ice because of deteriorating "man-made" global warming. Very funny headline. 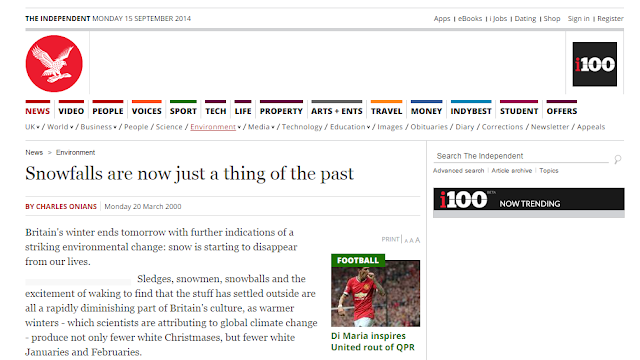 That story became "viral", circulated thousands of times as people panicked from that statement from a scientist at the Univ. of East Anglia. Now that story is gone. The newspaper is ashamed it ran that story? Here's from WUWT, One of the longest running climate prediction blundershas disappeared from the Internet, November 13, 2015.

Meanwhile, enjoy these scary stories. Paris 2015 is just 2-3 weeks away. 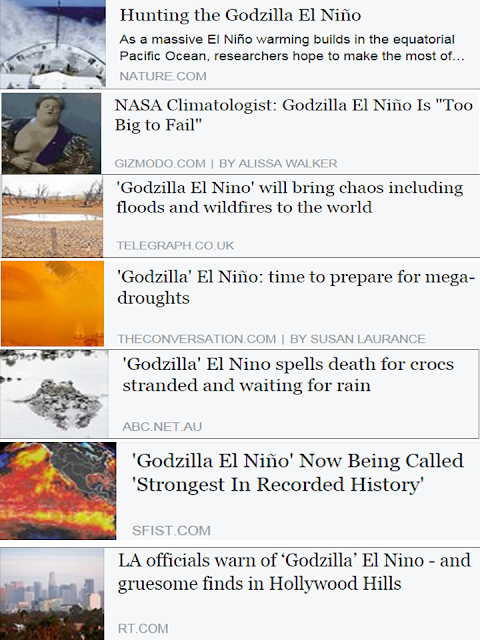 Nope, this is not a "Godzilla" EN or "Strongest EN in recorded history." Above are the chart and numbers of recent recorded history. We are not talking yet about past EN 100 or 1,000 years ago or longer.

As Paris 2015 UN climate alarmism and junkets meeting come closer, we expect more "scary, worrying, very worrying" stories and news reports. They have only one goal -- more government, more UN role, more ecological central planning. And these are the basis of continued "expensive electricity to save the planet" policies.
------------